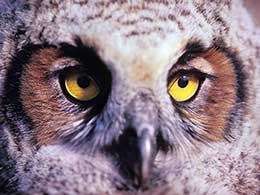 Stories of raptors attacking pets are the stuff of urban legends, far-fetched accounts of dogs being carried off that prove impossible to verify. But this March a great horned owl attacked several pets in front of witnesses over a four-day period until it met its demise with an ill-chosen foe.

Gakona is a small town in Interior Alaska across the Copper River from Wrangell-St. Elias National Park, one of a series of communities near the junction of the Glenn and Richardson highways. In early March, two dogs and a cat in the area were attacked by an owl and several pet rabbits and a dog were found dead, presumed victims of the same raptor. The first incident occurred about March 8.

Mickayla LeMaster was in her living room talking with her grandfather, Alan LeMaster, when she heard her cat Ladybug growling outside. She opened the door and saw the owl on the cat at the edge of the porch.

“That owl was huge. I was so scared, I came in and I was crying and I got my grampa and he shooed him off,” she said. “He flew about three feet. My grandfather scared him off and later he attacked the Hernandez’ dog.”

The cat hid under the car for several hours after the owl flew off. It wasn’t hurt even though the owl had gripped the cat with its talons, she said.

“My mom said to feel down in her fur and I felt maybe one small scratch. I think it helped that she has nice and thick fur.”

“Unlike our house cats that aren’t allowed to go outside, she’s a great fighter and she has claws in the front and back. She knows how to protect herself, her head was under the owl, nice and safe so nothing on her head was hurt.”

Kelsy Lorence described an attack on his mother Debbie’s Jack Russell Terrier, Alpine, in the March 21 issue of the area’s weekly paper, the Copper River Record. Debbie Lorence and her friend Mary Howarth-Hernandez had taken the small dog on a walk in the middle of the day. They heard it yelping up ahead and rushed around a corner to find the owl attacking. They charged the bird and it flew off. As it turned out, the attack occurred in Alan LeMaster’s yard the day after the incident with the cat.

The paper also reported that a few days later, two pet rabbits were killed in a pen a few miles down the road.

Ken Hughes saw the owl sitting in a tree above his driveway on March 11, and the next evening it attacked his grandson’s dog on the porch. Ken and his wife Althea have been the area since 1958; Ken has a degree in wildlife management and spent many years teaching in Gakona and Glennallen. He had heard of the earlier attacks and said another little white dog went missing and was found dead, a killing attributed to the owl. This time, though, the owl picked the wrong dog to mess with.

“It was just getting dark when it attacked the dog here,” he said. “It was a mistake, because the dog grabbed it by the neck and broke its neck. That’s what killed it. She’s a little terrier, about 15 pounds. That was March 12. Her eye was injured but that’s healed up okay.”

Hughes said he inspected the owl and brought it inside. “We called Fish and Game and they referred us to the BLM. We put it in a bag and they came and got it the next day and interviewed us.”

He and others in the community are assuming all the attacks were by this one bird. “We haven’t seen another owl since, and there have been no more attacks on anybody,” he said.

Bob Tobey is a veterinarian in nearby Copper Center and served as ADF&G’s local (GMU 13) area biologist for 32 years. Tobey treated one of the dogs, provided antibiotics for the second and talked with the owner of the cat that was attacked.

“There were punctures, I imagine they were the talons,” he said. “The one that was brought in was lucky, it had a puncture right next to the eye that just missed the eyeball. It had punctures around the neck and back. If one had hit a jugular, it could’ve been fatal. All three are doing fine now.”

Tobey said he’s treated pets that have been “chewed on” by lynx and coyotes but doesn’t recall treating any pets injured by a raptor before.

“Coyotes will catch dogs,” he said. “These little critters are in the food chain. If an animal gets hungry enough or aggressive enough it’ll take one.”

Steve Lewis is a raptor specialist with the US Fish and Wildlife Service in Juneau. He’s worked with goshawks, falcons, owls, eagles and other raptors for years.

“I have not heard a lot of cases of owls attacking pets,” Lewis said. “There are great horned owls around almost every community in Alaska and you don’t hear about this. If this was a common event it would be documented more often, and it doesn’t happen a lot. There are lots of people with little pets out there. You hear more about coyotes doing something like this - a 30 pound coyote could kill a dog. A great horned owl is a big bird, but they look way bigger than they are actually built.”

Lewis said that an owl going after a cat or a dog, especially when people are nearby, smacks of desperation. “I suspect there’s something going on with that bird and it wasn’t in good shape, or something was making it hard for it to catch wild prey. “

Lewis said hares, ptarmigan and grouse are a mainstay for great horned owls in the Interior. Snowshoe hare populations are cyclic and, if hare numbers are down, predators like owls could be more desperate for food. In the Lower 48, great horned owls take skunks, opossums, woodchucks and a variety of birds as large as ducks and even turkeys.

“(Pet) rabbits are a natural since they eat a lot of hares in the wild,” Lewis said. “They’re forest hunters but in winter anything goes. So a progression to pet rabbits and then maybe cats or something that size…sometimes an animal starts on this path and realizes that pets are easier than wild animals, but I think generally there’s something wrong with it.”

Alysia White, a ranger with Bureau of Land Management, took the bird and turned it in to the U.S. Fish and Wildlife Service office in Anchorage. She characterized the incident as a DLP – Defense of Life and Property killing.

“It was a good size great horned,” she said. “They’re pretty common in the area. People suspected (the attacks) were the same owl, but there’s no way to know that. We live in Alaska and we have animals all around us. And this time of year those birds are a little bit more hungry, everything is.”

She said predators are opportunistic and it’s not uncommon for people in the area to lose chickens and poultry to raptors - especially “free ranging” chickens. “You have to take precautions. The last dog was a small white dog a little larger than a rabbit. Small animals, you need to keep them on a leash or be right with them.”

The snowshoe hare population is at a very low point in the cycle, said Becky Schwanke, the Glennallen based area biologist for ADF&G. “We had a decline that started pretty severely last year,” she said. “So there’s a lot of changes in the predator-prey cycle, and owls are looking for additional food sources. Hares go through cycles and all their predators have to deal with it.”

That’s reflected in the lynx population as well. “We just did lynx transect surveys and, as we expected, lynx numbers are very low,” she said. “We just came off a 30-year high about three years ago. The population has plummeted. It documents from what we know from trappers. As soon as the snowshoe hares pop up, the cats pop up right behind them.”

Ken Hughes’ wife Althea, a birding enthusiast who has organized a variety of activities such as seasonal bird counts, said a number of owl species frequent the area. “We have boreal owls, hawk owls, great grey owls, and great horned owls,” she said. “We see them along the highway a lot, they hunt for voles and whatever else they can get.”

Great horned owls nest earlier than other birds, and she wondered if the owl might have been trying to feed nestlings. She said the attacks did not leave people fearful.

“I haven’t heard anyone say, ‘That owl was a horrible creature.’ People understand they are part of the system,” she said.

Riley Woodford produces the Sounds Wild radio program. He studied barn owls in Oregon, spotted owls in Arizona, and investigates unusual raptor "attacks" when they come to light. For more on owls in Alaska see the ADF&G website on owls