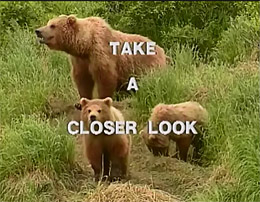 What do a bear’s ears tell you about its age? Does a bear’s fur offer a clue to its gender?

Wildlife watchers and bear hunters alike will appreciate “Take a Closer Look,” a video that provides an extremely close look at Alaska brown bears. This video teaches how to judge the age and sex of brown bears by looking closely at their behavior, size, shape, body characteristics and proportions. It features bears of known age and gender from the McNeil River viewing area.

Due to conservation concerns, wildlife managers in Alaska and in Canada want to reduce the take of female bears. Sows do not usually have cubs until they are at least 7 years old and the average interval between successful litters is four years. Consequently, the loss of a single sow represents a substantial loss of potential recruitment to the population via her cubs. That’s known as a low reproductive potential.

“Take a Closer Look” was produced in 1990 by the Yukon Government, with help from Alaska Fish and Game, to educate hunters and guides on how to judge trophy brown bears, as well as to help hunters identify male, female, younger and older bears. Many brown bear hunters prefer to take large male “trophy” bears, and will pass over females when they can tell the difference. Hunting guides who spend a lot of time watching bears are able to key in on the identifying characteristics and consistently lead clients to older male bears. 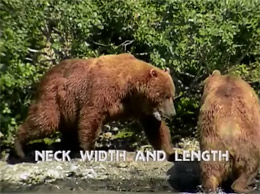 The video is required viewing for some Alaska hunters this year. In response to high female bear harvest in Southeast Alaska’s Game Management Unit 4 (Admiralty, Baranof and Chichagof islands), all hunters, resident and nonresident, registering for any Unit 4 brown bear hunt must acknowledge they have watched “Take a Closer Look.”

The one hour and eight minute video has four parts. A 12-minute introduction and overview touches on all the main points and is followed by three bear quizzes. Dozens of clips of wild bears interacting and going about their business are presented, allowing the viewer to apply and test the insights into bear age and gender. The narrator then reveals the bears “identity” and explains the clues. 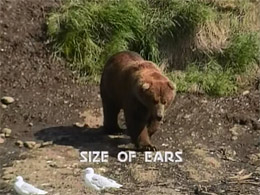 “Take a Closer Look” is available online, and DVDs or VHS tapes are available at many Alaska Department of Fish & Game offices for viewing. It can also be ordered from the Yukon Fish & Game Association, Box 4095, Whitehorse, Yukon, Canada YIA 359, or from The Outdoors Alaska Store