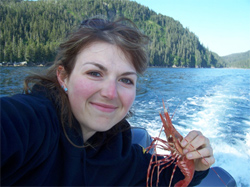 Easily accessible from Anchorage, about an hour by car to Whittier, the Anton Anderson Memorial Tunnel offers a gateway to this marine wilderness. Prior to 2000 when the tunnel opened to drive through access, the only way to get in, or out, was by rail. Since then, the western side of PWS has increasingly turned into a playground for boaters, anglers, hunters, and other recreationalists within a short driving distance. And until salmon show up there are few alternatives for those anxious to be on the water catching dinner, unless you like to eat big, delicious shrimp that is.

Spot shrimp are the largest type of shrimp in the North Pacific. They take to their name by the distinctive white, paired spots located just behind the head and just in front of the tail. Spot shrimp, or “spot prawns” as some call them, opens for non commercial (sport, personal use, and subsistence), and in recent years commercial harvest, in early spring on April 15th and attract a wide variety of participants.

Commercial shrimp landings were first documented in PWS in 1960 and was a large and historically important commercial fishery. At the time the fishery was developing the season was open year round with no harvest limit or restrictions. The fishery historically occurred in a large area known as the traditional harvest area which encompassed the northern and western shores of PWS from Port of Valdez to Whittier and the entire southwest portion of the sound.

The commercial pot shrimp fishery expanded rapidly during 1978 to 1982 as local markets were established and the major harvest areas located. Then in 1982 season dates of April 1 through November 30 and a guideline harvest range were adopted. In 1984 a management plan was created splitting the season and establishing a guideline harvest range for each season as well as an experimental harvest area that was open year round. By 1988 the experimental area had closed due to a collapse in harvest and declining abundance. In 1990 the experimental area was abolished, the spring season shortened, gear limits imposed, and gear specifications (7/8-inch rigid mesh requirement) put into place. And then finally in 1992 the commercial fishery closed due to low abundance.

For the first 18 years or so, commercial harvest was relatively low ranging from zero in 1961 to approximately 25,000 pounds in 1974. Effort was also low in the early years with only 9 vessels participating in 1978 before the start of the rise in the fishery in 1979. The number of vessels steadily grew and the fishery peaked in 1986 with about 86 vessels harvesting more than 290,000 pounds of spot shrimp before beginning to drop off. The last commercial harvest occurred in 1991 before the fishery closed. 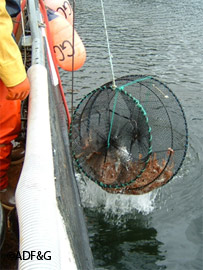 A nice pot full of spot shrimp is pulled from the icy waters of the Sound.

In March of 1989 the devastating effects of the Exxon Valdez oil spill complicated the prosecution of the fishery and as a result led to the development of the ADF&G Division of Commercial Fisheries PWS annual spot shrimp stock assessment survey. Early results of the survey concluded that PWS spot shrimp likely declined as a result of overfishing and unfavorable environmental conditions. Now data collected from the survey is used along with other statistical information to forecast the harvestable biomass for the following year.

Spot shrimp are particularly susceptible to risk of overfishing due to a few key life history characteristics. They are hermaphroditic, meaning they begin life as males and as they grow later transition to females, can live longer than 7 years, and are sedentary. Because they don’t move they are susceptible to depletion, and because they begin as males and become females as they attain a larger size, fishing pressure typically has the greatest impact on the larger, female, segment of the population.

Since the commercial closure in 1992, spot shrimp abundance has slowly but steadily increased. In December 2008 the Alaska Board of Fisheries adopted a new management approach and built a plan to resume commercial shrimping around several conservation measures.

The first specifies that a minimum harvestable surplus of 110,000 lbs of spot shrimp be achieved before a commercial fishery can occur. Second, 40% of the harvestable surplus is to be allocated to the commercial fishery and 60% to the non commercial fisheries (sport, personal use, and subsistence). Third, the area open for commercial pot shrimp fishing is to rotate annually between three different areas (Areas 1, 2 and 3) so that no one area is under constant fishing pressure, however several areas popular with recreational shrimpers are off-limits to commercial vessels to minimize gear conflict between users. The fourth allows ADF&G to determine the number of shrimp pots a commercial vessel can operate based on the number of vessels registered to participate, estimated catch per unit effort (CPUE), and the magnitude of the guideline harvest level (GHL). Fifth, gear can only be operated between 8 am and 4 pm unless modified by emergency order. And sixth specifies that fishermen participating in the commercial shrimp pot fishery must call the managing ADF&G office in Cordova each time landing shrimp to report their harvest and call weekly to report log book information.

After being closed for more than 18 years the PWS commercial pot shrimp fishery opened once again in 2010 with a modest guideline harvest level of 55,000 lbs and a limit of 20 pots per vessel. Small beans compared to Southeast pot shrimp fisheries that cap harvest at about 800,000 pounds but none the less a respectable start. The exciting news created a stir in coastal communities around PWS including Anchorage, Cordova, and Valdez. As a result 155 vessels registered by the April 1 deadline of which 73 participated when the fishery opened on April 15th. Despite the buzz only 45,349 pounds of spot shrimp, worth about $193,000, was harvested leaving a small chunk of the GHL unharvested when the fishery closed by regulation on September 15th. The majority of harvesters are licensed to direct market their catch themselves selling fresh shrimp to the public at the dock and on street corners but a number of fishers also sell to a few larger canneries that supply local grocery stores and other markets. 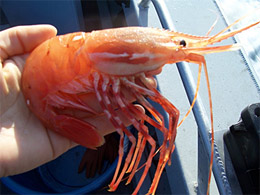 Since the recovery of the fishery in 2010 the lure of these tasty shellfish has continued to peak interest among the small recreational boating fleet out of Whittier as well as seasoned commercial fishers around the Sound. Although the song of the spot shrimp siren attracts greenhorns into the fishery each year, the number of registered participants and effort has decreased over the past two years as fuel and other expenses have gone up. Current management of the PWS pot shrimp fishery has been successful largely because of the ability to control the pace of the fishery with gear limits, fishing periods and hours of gear deployment, as well as the participants compliance with reporting requirements. And the exciting part according to Maria Wessel, PWS shellfish and groundfish area management biologist, is that she has every expectation that this will continue to be the case.

The PWS Area is an exclusive registration area for vessels fishing for shrimp with pot gear and a commissioner's permit is required. In order to participate fishermen must poses a current CFEC permit card and vessel license and have registered with ADF&G by 5 p.m. April 1. Contact the Cordova ADF&G office at (907) 424-3212 for more information.

In addition to the pot fishery, there is also a small shrimp trawl fishery in Prince William Sound that targets sidestripe prawns, another tasty species although smaller than their spotted cousins.

The good news is that with the rebound of commercial pot shrimping in PWS, there are more of these sustainably produced tasty shellfish on dinner plates all over Southcentral Alaska and beyond. Whether you like to set sail in the Sound and catch them yourself, buy them from one of the many licensed local commercial fishers, or order them as fancy fare at a restaurant there is one thing everyone can agree on. Shrimp are delicious.