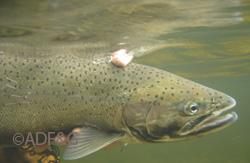 A Ford Arm steelhead is released.

The throaty sound of the radial engine float plane fades into the distance as silence settles back into the valley. It is a special type of silence observed in the early morning on a remote lake; a stillness, a presence of solitude. I zip my dry suit and pull the neoprene hood over my head. As I slip into the water, the first splash of icy water hits my face and brings my senses to full alert. I begin to move forward into the water, peering through the face mask, when suddenly a shadow emerges on the edge of my vision. The shadow grows out of the murky water and I suddenly recognize it as an adult steelhead; a beautiful chrome bright steelhead, skirting the edge of the bank and traveling upstream into the lake. It is the first of many in today’s steelhead snorkel survey.

So what exactly is a steelhead? These unique fish share the same physical traits and scientific name as rainbow trout (Oncorhynchus mykiss). They are essentially a rainbow trout that has migrated from its freshwater home to feed in the open waters of the ocean. By living in saltwater where there is more to feed on, steelhead rapidly grow large before returning to freshwater to spawn. Unlike pacific salmon which spawn only once and then die, steelhead may spawn multiple times during their life; migrating from freshwater to the ocean and back again.

Across Southeast Alaska, fisheries biologists with the Alaska Department of Fish and Game annually snorkel a selection of index streams that are home to this world renowned sport fish. It may sound strange, but donning a dry suit and snorkeling down a river is a noninvasive and cost effective method to monitor steelhead populations. Biologists literally count every steelhead they see during these surveys, which are conducted once a week during April and May when adult steelhead are returning to freshwater to spawn. The surveys attempt to establish a peak instream count of adult steelhead within each index stream. When the peak counts from all index streams are viewed collectively, they provide a regionwide perspective of relative abundance. While we know we never see all the steelhead present in the stream at any given time, conducting the stream surveys in the same way every year allows for a comparison over time. It is a finger on the heart beat of steelhead in southeast Alaska. A short video that provides a look at steelhead in their natural environment, from the perspective of the ADF&G staff who conduct these surveys, can be found at the end of this article. 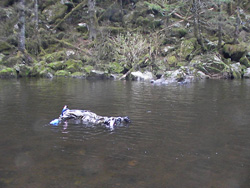 A fishery biologist conducts a steelhead survey by snorkeling a Southeast Alaska river.

Steelhead are known throughout the world as a prized sport fish. Their aerial acrobatics and hard and fast runs are what form fishing legends. They can be fished on the fly rod or with spinning gear; and promise a thrill in either method. Alaska’s coastline is dotted with numerous streams that are home to steelhead, from the Alexander Archipelago of Southeast, around the coast of the Gulf of Alaska and west to the Alaska Peninsula. Most of these streams see returns of only a few hundred fish while a small number of drainages see returns that number in the thousands.

Just as unique as the fish, so too are the anglers that seek them. Steelhead seem to entice a relentless drive for some anglers. Mention steelhead and you’ll recognize these eager anglers by the glint that comes to their eyes. In corners all across Alaska you may find one laboring over a meticulously tied fly, reviewing their catch log from years gone by and comparing it with historic weather data, or reminiscing over that last catch, always anxious for the next. Many anglers travel across the world to have the opportunity to fish for wild steelhead within the pristine setting that Alaska so abundantly offers. Don’t be misled; steelhead fishing is not just for elite anglers. Anglers of all skill levels can appreciate the experience and be successful when fishing for steelhead. But be warned, it can be addictive.

Whatever your skill level or personality traits, anglers targeting steelhead share one thing in common; it’s not all about the harvest. Conservation is an important part of ensuring sustainable populations of steelhead and anglers have the opportunity to play an active role in conservation every time they are on the water. The complex life history of steelhead and their tendency to occur in small populations often require special regulations to protect steelhead from being overharvested. In some areas of the country steelhead fishing is only catch and release, where no fish are harvested. In Alaska, the Alaska Board of Fisheries adopted conservative regulations for steelhead in response to concerns over declining populations observed in the early 1990’s. These regulations established bag and possession limits and a minimum size limit of 36 inches for steelhead in southeast Alaska. The Alaska Department of Fish and Game estimates that this size limit protects approximately 95 percent of all steelhead in southeast Alaska from harvest. Under this management strategy, most steelhead caught will be released while anglers still have the opportunity to harvest a large trophy fish. While it may be challenging to catch a steelhead large enough to harvest, the thrill of steelhead fishing keeps anglers coming back again and again. Since most steelhead are caught and released, anglers are encouraged to reduce stress on these fish by following some guidelines: land the fish quickly, use a single hook, artificial lure or fly, keep the fish in the water until released, carefully remove the hook or cut the line, and support the fish facing into the current of the water until it swims away. The use of bait increases incidental mortality of released steelhead and is prohibited in the freshwater’s of southeast Alaska when steelhead are generally present in the streams. 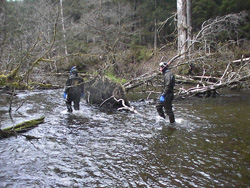 Walking a shallow section during a steelhead survey.

As steelhead season approaches, I encourage all Alaskans to seek out this unique opportunity we have in our state’s sport fisheries. You’ll be filled with excitement while interacting with these remarkable fish and just as important, you’ll feel the sense of enjoyment that accompanies fishing in Alaska’s wild areas. If you happen to be out on the river and see a strange shape with a snorkel floating down river, don’t be alarmed, it’s probably your local ADF&G staff keeping tabs on Alaska’s fishery resources.

Southeast Steelhead Snorkel Survey This short video is a compilation of footage taken throughout the course of steelhead snorkel surveys in Southeast Alaska (2009-2012). The intent is to give the viewer an idea of how ADF&G personnel conduct steelhead surveys with some entertaining underwater video of steelhead, rainbow trout, Dolly Varden and coho fry observed during the course of the snorkel surveys. The four-arrows icon between the word Vimeo and the volume control will enlarge the frame.

Patrick Fowler is an ADF&G fishery biologist based in Sitka.