Featured Video: How to Set Line for burbot
How to Clean and Fillet Your Catch 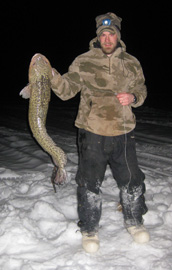 Burbot are a strange looking fish, a freshwater cod found in many of Interior Alaska’s lakes and rivers. Burbot are delicious and popular with ice fishermen. The Alaska Department of Fish and Game recently produced two videos on burbot: “How to set line for burbot,” and “How to clean and fillet your catch.” Both can be viewed on the burbot fishing page, which also has links to burbot fishing methods and recipes.

Ice fishing for burbot is a great way to get out and enjoy the outdoors during winter. Burbot are fun to catch and great to eat. Burbot look like cod, with elongated dorsal and anal fins that extend all the way to a small round tail fin and a single soft barb on their lower jaw, like a catfish whisker. Burbot are the only freshwater cod in North America. The state record burbot is a 24-pound, 12 oz fish caught from Lake Louise in 1976. That fish was likely born in the 1950s, Burbot are relatively long lived and can live more than 20 years. 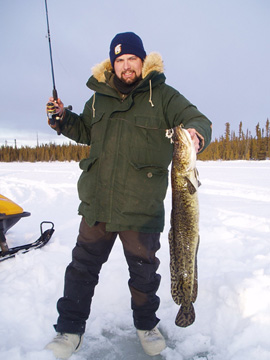 Burbot are slow growing and don’t spawn until they are about 18 inches long and six or seven years old. They spawn in winter under the ice – the only freshwater fish in Alaska that does - and spawning burbot have been seen milling together in a large writhing ball. Eggs are tiny and a large burbot can produce more than a million eggs. Burbot do not make nests, instead they just broadcast spawn in the water column and let the eggs and milt fall to rest on the bottom. Burbot prefer certain spawning areas and telemetry studies have documented annual spawning migrations in the Kuskokwim River of more than 500 miles.

Young burbot feed on insects and invertebrates, and by five or six, switch almost exclusively to fish. Adult burbot can appear sluggish, but they are voracious predators, feeding mostly at night. Whitefish, sculpins, lampreys, and other burbot are common food items. For more information, view the species profile for burbot.