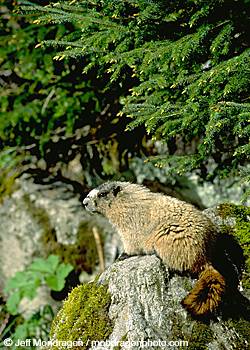 Marmots are designed for cold, with thick fur and ample body fat. They can't sweat or pant to dispel excess body heat, so they avoid overheating on summer afternoons by retreating to the cool, mosquito-free darkness of their burrows, the same burrows that shelter them during their long winter hibernation.

Come dusk and these giant ground squirrels are back in action, feeding on grasses, flowers, moss, lichens and roots and alerting the colony if an intruder comes in sight. Researchers have found that marmots use different alarm calls depending on whether a potential predator approaches by land or by air.

There are three kinds of marmot in Alaska. The cat-size hoary marmot and the Alaska marmot weigh about ten pounds, and the smaller woodchuck is about half that size. The hoary marmot is most familiar - it lives in rocky talus slopes in the mountains of central, southwest and southeast Alaska, where it can be found right down to sea level. The darker Alaska marmot lives further north, on rocky slopes throughout much of the Brooks Range.

The Alaska marmot was originally thought to be a subspecies of the hoary marmot, but in the early 1970s it was recognized as a distinct species. It is more closely related to marmots of Asia and Siberia, and there's a good reason for that.

During the ice age continental glaciers covered Canada, Southeast and South-central Alaska. The sea level was 300-feet lower and Alaska was united with Asia. This was no mere land bridge - the entire Bering Sea was dry land and the Asian continent extended into North America. 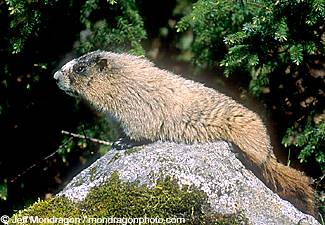 Interior Alaska was ice free, and a vast, grassy plain rich with wildlife extended clear across the north - a climate cold, but too dry for glaciers to form. Known as Beringia, this was home to now-extinct wooly mammoths, giant short-faced bears and scimitar cats, as well as animals that survive today such as wolverines and Alaska marmots.

A thousand-miles of ice separated Beringia from what is now the United States. This is where our familiar hoary marmots lived during the ice age. As the glaciers retreated and Southeast and South-central Alaska opened up, plants and animals colonized this new environment, moving in from the north and from the south. Hoary marmots, along with wolves, bears and other animals, pushed north into Southeast and South-central Alaska.

Other animals, such as mountain goats and humans, moved south into Southeast Alaska - and the Americas. But Alaska marmots, adapted for cold environs, did not greatly expand their range, and still make their home in the Arctic.

Alaska's third species of marmot, the woodchuck, moved in from the east. Woodchucks are good climbers and swimmers and will take to trees or the water to avoid predators. The woodchuck digs its dens in the dry lowlands and river valleys of East-central Alaska. This animal is well known in the Eastern United States and the Midwest as the groundhog, the fabled predictor of spring.