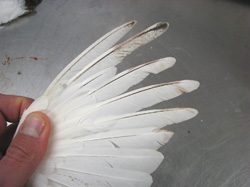 A wing in the hand can tell a lot about the bird in the bush.

State wildlife biologist Rick Merizon has launched a wing collection program to gain insights into Alaska’s grouse and ptarmigan. So far, hunters have sent him almost 400 wings, and he hopes to collect 2,000 by spring of 2013.

“We’re asking hunters to voluntarily provide one wing and a tail for grouse, and one wing and a head for ptarmigan,” Merizon said. “This helps us determine harvest composition information for the game birds. This is one more tool we can use to monitor and evaluate various populations - in addition to the hunter reports, spring time abundance surveys, and the online small game hunter harvest survey.”

Alaska is home to four species of grouse and three species of ptarmigan. Merizon, who serves as coordinator for Fish and Game’s statewide small game program, said he’s already received examples of all seven species this year.

Most grouse are harvested between the first part of the season (early to mid-August) and Thanksgiving. Merizon said after Thanksgiving bird hunters generally switch to hunting ptarmigan in the winter. “I’m hoping we can get close to a thousand ptarmigan between Christmas and the end of the season in March and April.”

“This year it’s been good, so far I’ve looked at close to 200 wings,” Merizon said. “Over the past three weeks I’ve received nearly 200 more and more are arriving every week. I have more samples in the freezer than I’ve been able to look at. Between Thanksgiving and Christmas I’ll be able to look at them and get the results back to folks.”

Merizon provides the sex and age information to the hunters who supply the wings.

“If a hunter is willing to voluntarily provide these samples, I try to get back to the hunter with the information,” he said. “At the end of the season I create a statewide status of small game report, and I’ll also provide that – it's also available on the small game website.” 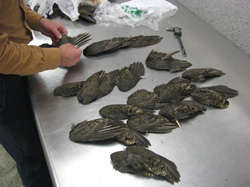 An assortment of grouse wings

Hunters are asked to freeze the parts and put the individual wings and associated parts (heads or tails) in individual preprinted wing envelopes with information on the date and approximate location of harvest and the nearest town. The wing envelopes can be mailed in a larger pre-paid return envelope. These are available at Fish and Game offices in Juneau, Fairbanks, Palmer, Petersburg, Delta Junction, McGrath, and other area offices. Merizon will also provide envelopes to anyone requesting them.

“Hunters can call me and ask directly, go to nearest Fish and Game office, go to small game webpage and request them from there; or the most basic, simply retain the wings, record the information, put them in any kind of bag, keep them frozen, and then mail them at their convenience or just drop them off at nearest Fish and Game office and they’ll send them on to me. But ideally I don’t want anyone spending money, and the pre-paid envelopes cover the postage.”

Merizon has been active in a variety of outreach efforts since taking the position of small game coordinator last year. He’s delivered presentations in different communities throughout Southcentral Alaska, taught at the Becoming an Outdoors Woman weekend events, and attended various sportsman shows.

“I’m really trying to engage the public, with everything I get from them I want to give 110% back,” he said. “I want to keep the dialogue open with hunters, without their help the small game program would be less effective and the wing collection program would be nonexistent. “