On the Nushagak
Tagging Salmon in field Camp 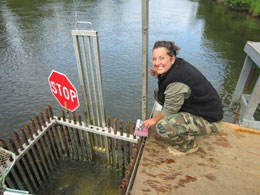 I was freezing. Not only was it my first night in a field camp on the Nushagak River, but as a sophomore at Oregon State University, it was my first night in any field camp. The “waterproof” bag that had held my gear on the hour-long boat ride through Bristol Bay and up the river turned out to be not so waterproof—and my mummy sleeping bag had gotten soaked. So there I was, my first night in the wild, sleeping in a wet mummy bag in thirty degree weather, and beginning to seriously question my decision to volunteer with the Alaska Department of Fish and Game (ADF&G).

This summer I was afforded the opportunity to experience Alaska for the first time. The entire year prior I had been planning on making the trek north. In fact, I told my previous summer boss when asked to return that, “I would, but I’m going to be in Alaska next year instead.” For months the excitement grew within me and by the time June’s final exams rolled around I could barely contain the anticipation. When I stepped onto Alaska soil the elation was almost unbearable. I couldn’t believe that I had finally made it, that my words about traveling to Alaska had finally rung true.

When I arrived in Dillingham I felt like I was the new kid in class, my stomach full of butterflies and my mind racing with thoughts of what this new world held for me and what it would look like. At the airport, I was met by one of my campmates, Chase. He showed me around the tiniest town that I had ever visited, Dillingham. The city is so small that even I, being extremely directionally challenged, could not get lost. That night I stayed in the bunkhouse with fellow ADF&G employees, hardly sleeping for the thought of what the morning’s boat ride might bring. When the new day finally came I met another camp-mate, Cody, and helped load the boat. For the first of many mornings, I donned my rain gear.

The bay was exceptionally choppy and every rolling wave we plunged through doused all of us and our gear. After about an hour we arrived at my home for the next three weeks and I set to exploring my surroundings. There was my tent, right behind the cook tent, and then up the hill was the data tent with a wood stove for chilly evenings and to dry out wet clothes. My coworkers’ two tents were behind the data tent, with a barbeque and an area to mend nets in front. This seemed complete at first, but then it suddenly hit me. Something was missing. What was that something, you may ask? Well I’ll tell you— it was an outhouse. I would be roughing it for three weeks, with nothing but toilet paper, mosquito repellent, and a shovel.

That very same day I got my first taste of the project. Before I had arrived I was aware that I would be helping tag king (Chinook) salmon and had read the Op plan (the operational plan that says what the study is all about). Once actually at camp, Chase explained everything in more detail. He took me to the data tent where I viewed the salmon tags. I learned that each fish would be given two tags. One was an acoustic tag that would be inserted into their stomach via a plunger-like tube through their mouth. The acoustic tag was the key and also the most expensive piece of the entire operation, worth around $500. It could only be activated after a magnet taped to it had been removed. Once that happened it would send out a signal every two seconds. In order to make sure that a faulty tag was not placed in any fish, we were required to test every tag with a wireless hydrophone. After a signal was received we marked the tag operational and placed a small rubber band on it to keep the salmon from spitting it back up. Then we put a numbered Floy T-anchor tag with it, which would help us keep track of which salmon was which after the acoustic tag was inserted. More importantly, since the Floy tag was bright yellow and stuck out of the fish on the left side of its dorsal (uppermost) fin, it informed fishermen that they had caught an ADF&G tagged salmon. 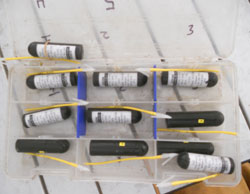 Acoustic tags before they are inserted into king salmon, and the yellow Floy T-anchor tags that mark the fish.

After I learned all about the tags, Chase explained that there was a sonar site a few miles upriver that counted the passing salmon. The goal was to determine the accuracy of the aforementioned sonar site as well as help figure out how to improve it. I learned that the salmon counted by the sonar site affects the whole Nushagak fishery. If the numbers are low an emergency order is given to lower bag limits on sport harvested kings and the number of commercial openings is reduced. If the numbers rise and if escapement projections (the number of salmon that make it upstream to spawn) are looking good, then the bag limit and commercial openings can be raised once more. In fact, during my three weeks of work we rode up the river twice to inform fishing camps first that the bag limit was lowered and then that it was back to normal.

Once I had the information on the project and the tags, we went out on the river to get to work. Cody, who I learned was an excellent boat driver, showed me the four zones in which we were to drift a gillnet (a net designed to capture fish by the gills). The first zone was on the right bank near shore (RBNS), the second one was on the left bank near shore (LBNS), the third zone was mid-river (MR), and the fourth zone was in a back channel (BC) that my coworkers called Angel Bay. We were to spend an equal amount of time in the first three channels every day, while fishing them in a pre-determined random order and then spend approximately 20 minutes in Angel Bay every other day.

After going to our first zone of the day, I was walked through the data sheet for which I would be responsible. At the top of every sheet I needed to write the date of the drift, the mesh size of the net, the drift start time and the drift end time. For every king salmon that appeared healthy enough to tag, I was to record its acoustic tag number, its Floy tag number, the zone it was caught in, the total length of the fish (TL) in centimeters, the mid-eye to tail-fork (METF) length in centimeters, the sex of the fish, its condition, and the time spent in the zone before the fish was caught. The last thing I was put in charge of was placing four scales taken from each fish onto a scale card so that DNA analysis could be conducted after the study was complete. The scale samples proved to be the most difficult aspect of my duties because when it was raining, the scales could wash right off. 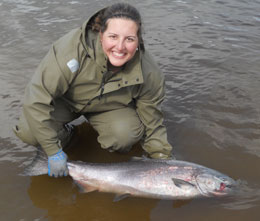 Emily and her 39-inch monster king.

When this briefing was over we got right to work and I was able to finally see what a wild Alaska salmon looked like up close. Although the Nushagak has one of the largest king salmon runs, kings weren’t the only fish we caught. I was able to see chum salmon as well as a few sockeye that first day. When the fishing was over, we returned to camp where I would learn a new skill: how to mend a net. It was tricky at first, but once Cody walked me through how to loop and knot, I found it to be very similar to knitting. After learning all those new skills on the first day, I was exhausted. So I then proceeded to go to my tent and discover that my mummy bag was wet. This discovery literally put a damper on everything. Once I made it through the night and got my bag dried out, I was immediately back in higher spirits.

Thankfully the craziness of that first day was over, and our camp settled into a routine; wake up, eat, work, eat, mend nets, sleep, and repeat. It wasn’t all work and no play however. Before coming to Alaska, I had never gone fishing, but in camp I was given the opportunity to fish all the time. Thanks to the help of my campmates, who taught me so much over the course of those three weeks, I am proud to say that I caught three chums, three jacks (kings under twenty inches long), a medium sized king, and then a monster king that was just over 39 inches long. Not only can I now catch fish, I also learned how to gut and fillet my fish. On the Fourth of July we fished until midnight, thanks to the continued daylight, and lit off fireworks. We went on hikes up into the tundra where there were fantastic views of the river and the surrounding mountains. I was able to make good friends, see multiple moose, ermine, beluga whales, loons, arctic terns, gulls, too many eagles to count, many other bird species, and a porcupine that I named Humphrey, which wandered around our camp. During the week we would visit the sonar camp upriver, where I was able to help count fish, and we would collect water from a stream. On weekends we went back into town where I would finally get to shower and go on adventures with more of my new friends, learning that unbrushed hair, sweatpants, crocs, and no makeup meant you fit in.

In my time spent on the Nushagak with ADF&G I was able to gain new skills, new friends, a better understanding of men (they eat a giant slab of meat for every meal and put Lowry’s seasoning salt on everything), and a renewed love and admiration of nature and all the creatures in it. But most of all, I was able to truly appreciate the one thing I didn’t have for three weeks: a real bathroom.