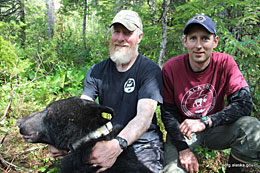 Alaska’s Prince of Wales Island is very popular with black bear hunters - almost 500 bears were harvested there in 2005. But that may be too many, and state wildlife biologists have been gathering new information about bears, hunters and hunting effort.

Several research projects are underway and hunting regulations have been changed, especially regarding nonresident hunters.

Into the mid 1990’s the annual black bear harvest averaged about 225 on Prince of Wales (known generally as POW) and a few neighboring islands that comprise Game Management Unit 2 in southern Southeast Alaska. Around 1997 the harvest began to surge. At the same time, logging was also impacting the carrying capacity. Harvest of bears on POW increased steadily in the early 2000s, peaking at almost 500 bears in 2005. Biologists were concerned that this was not sustainable, and the hunting pressure kept increasing. “Fishing lodges were beginning to offer hunting trips on top of the fishing,” said Porter. “They already had the infrastructure in place, so they ramped up really fast.”

“The increased Southeast Alaska harvest had a lot to do with changes made in Canada, as bear hunting opportunities for nonresidents declined in parts of Canada,” Porter said. “Montana also tightened up its bear hunting regulations. But on POW, because of the extensive road system and easy access, hunters had a good chance of being successful whether they were skilled bear hunters or not.”

During that period the economy was good, and the internet was taking off as a way to advertise and promote hunting opportunities. There were lots of magazine articles about POW bear hunting. Hunting shows were promoting POW as a black bear hunting destination, and even the local visitor’s guide promoted bear hunting as part of the tourist attraction. Given these circumstances, the allure of a relatively inexpensive Alaskan adventure and POW’s reputation for producing trophy bears, it is easy to see how the harvest increased so rapidly.

Given bears’ low reproductive rate, the high and increasing harvest (especially of females), and habitat changes on the island, wildlife managers established several research projects to better understand the bears and to insure that the harvest is sustainable.

Over five days this June, Fish and Game biologists captured, collared and released 16 black bears. Since the summer of 2010, 55 bears on POW have been equipped with GPS or VHF radio collars to provide insights into their life history.

“We currently have 36 bears on the air,” said state wildlife biologist Steve Bethune, who works on the island and is based in Craig. When the collars are retrieved they’ll provide important information about the bears' home ranges, movements and habitat use – the avalanche slopes, forests and beaches where they feed, the salmon streams where they fatten up for winter, and the dens where they hibernate and have their cubs. 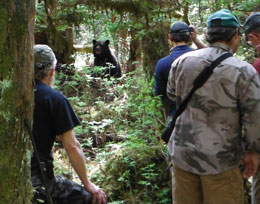 Boyd Porter, left, watches a black bear moments after darting it. The drugs take a few minutes to take affect and then the small crew of biologists can take blood and other tissue samples and equip the animal with a GPS collar.

Identifying specific bears makes it possible to track them and monitor their survival and reproductive success.

It’s also important to know what the bears eat. When the bears are captured and collared, blood and tissue samples are also taken. Stable isotopes in blood, tissue and hair provide valuable information about diet, including how much of the bears’ diet is deer fawns.

State biologists and deer researcher Sophie Gilbert, a graduate student at the University of Alaska Fairbanks, are also looking at fawn mortality and predation on fawns by black bears. Porter, the area biologist in southern Southeast Alaska, said a pilot study indicated that approximately 55 percent of the fawns born were eaten by bears each spring. That’s consistent with what Gilbert is finding in her recent deer research work.

Porter said he finds the similar percentages very interesting, comparing earlier fawn mortality work done 10 years ago when bear densities were much higher, to the lower bear numbers now, suggesting a few bears may be responsible for most of the fawn predation. “This implies that some bears are fawn specialists - they’re out in the spring hunting fawns.” Porter said. About half the fawns were eaten in the first three weeks of life. After that they are much faster and more agile, thus better able to evade predators.

Biologists also need to better understand bear hunters and their hunting methods and effort. Successful hunters are required to bring in the hide and skull of a harvested bear for “sealing” (a seal, actually a small tag, is attached to the hide and skull). The sealer takes information from the hunter about the hunt and measures the skull and collects data and biological samples.

“Sealing provides some good information about harvested bears,” said Porter. “But we need information from the hunters who don’t get a bear too.” Increased bear hunting effort could indicate fewer bears.

All hunters whether successful or unsuccessful must now fill out a harvest ticket. Harvest tickets provide information regarding the effort hunters are making, valuable information for wildlife managers. “Before harvest reports we had no idea how much effort there was out there, success and lack of success, the numbers of hunters, location of hunt, and number of days hunted,” Porter said.

“We’re also getting information about wounding loss that is occurring,” said Assistant Area Biologist Bethune. “We always suspected this was happening, but prior to harvests, there was no good way for hunters to report it.” 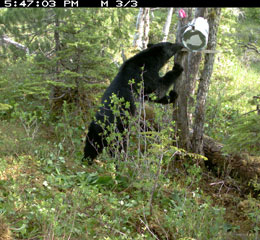 This photo taken by a motion-triggered trail camera shows a black bear investigating a snare. This bear managed to trip the snare without getting caught. See the trail camera gallery for more images.

Over the next few years as biologists collect and evaluate the data from deer research, bear research, and hunters, they’ll develop a better understanding of black bear ecology and population dynamics on Prince of Wales Island.

The big black bear showed up at 5:40 in the afternoon, about six hours after the biologists set the trap. He was curious but wary. He spent about ten minutes checking out the bait, left for three hours, then returned at dusk for another look. After a half-hour of sniffing around and poking at the trap, he managed to trip it without getting caught.

A motion-triggered trail camera caught all the action.

The trap was a bucket snare, designed so a bear reaches inside the bucket to get the bait, triggering a spring that pulls a cable loop over the bear’s paw. A stop prevents the cable from overtightening. The spring also trips a radio transmitter that signals to the biologists that the trap has been triggered. The biologists arrive, tranquilize the animal, take samples and measurements and equip the bear with a GPS collar. On a good day the processing can take just 20 or 30 minutes and the bear is free to go.

Prior to the capture work on Prince of Wales Island several weeks of pre-baiting preceded the actual snaring, to lure bears into the vicinity of the traps.

Trail cameras are used at the some of the sites and provide valuable insights. At the Big Lake site the trail camera revealed that a bear captured a previous year had investigated the trap but not tripped it.

Trail cameras confirm the capture time and enable researchers to see if a female bear has a cub or cubs with her. It also shows that other bears sometimes come in and check out the situation. Watching how bears behave as they investigate the trap also helps biologists to fine tune capture techniques.

Riley Woodford is the editor of "Alaska Fish and Wildlife News" and the producer of the "Sounds Wild" radio program.