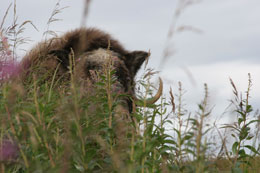 Anne Sutton snapped this photo as she peered up through the fireweed at a foraging muskox.

Sutton and state wildlife biologist Tony Gorn were on the Nome-Council Road checking viewing areas and talking about animals that might be encountered. Sutton was taking pictures and had brought an audio recorder as well, hoping to capture some audio for the department’s “Sounds Wild” radio program.

“We stopped and some muskox were over a little rise, grazing and moving slowly along,” she said. “I had a recorder in one hand and a camera in the other, and I thought I could get some munching sounds. Not the great clashing sounds of bulls fighting, but something. So I was crouched down in the tall grass and fireweed and this muskox came over a little rise and there we were, eyeball to eyeball.”

Gorn witnessed the close encounter and hollered at the animal to move along.

“The muskox just sauntered off,” Sutton said. “I had just come from McNeil River (bear viewing area) and so I was maybe a little more comfortable with proximity than I should have been.”

Biologists do not recommend hiding in the bushes while muskox approach, and neither does the new viewing guide. The 154-page full color guide offers viewing tips, maps, milepost specifics and a wealth of information on habitats and wildlife. About 300 photographs are included. 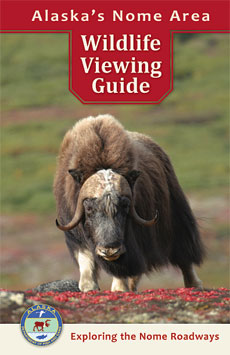 Sutton is the coordinator for Fish and Game’s wildlife viewing program, and inherited the project when she came on board two years ago. Biologist Peter Bente said former regional supervisor John Coady and Nome area staff conceived of a viewing guide more than a decade ago. Early on they envisioned more of a comprehensive natural history book, he said. “But we realized that’s a huge undertaking. We needed something that would be a little handier on the seat of the car.”

“Our first concept was to focus on charismatic mammals, but then we realized there are a lot of other aspects of Nome wildlife that people would be very interested in,” Bente said. “A lot of staff worked on it, especially Sue Steinacher and Beth Peluso. I give Anne a lot of credit, she pulled in a lot of different drafts, massaged it really well, and we have a fine product that’s been well received in Nome. A lot of longtime residents have taken me aside and complemented the staff."

“Sue had put in an incredible amount of work (before she retired) and other contributors had also made a huge effort,” Sutton said. “I wrote the remaining sections and smoothed out the writing so it was consistent and did a lot of editing. ”

Bente helped with editing and providing information on birds, focusing on particular species. “I’ve had a long career with birds,” he said. “It’s a challenge to take the long species list of all the birds you can see here and make it manageable in book.” 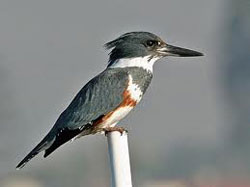 Kingfishers are among the many birds found in the Nome area.

Sutton explored a variety of ways to most effectively structure the book. She worked closely with graphic designer Kim Mincer on the layout. Mincer works for the Bureau of Land Management, and the federal agency contributed the designer’s time to the project.

“We hope that this won’t be just a book for tourists, but will be of great interest to Nome residents as well,” Sutton said. “There is a lot of natural history information that may pique people’s interest and help explain things about habitat and wildlife that people might have noticed but never really understood.”

“I was really excited to work on this – it’s not only a beautiful area and a remarkable landscape, but there are these roads, these three roads that travel through wild lands,” Sutton said. “They allow for a unique access to this sub-Arctic landscape, whether it’s coastal, boreal forest, mountain range or tundra. It’s a neat area to explore.”

The guide is available at bookstores across Alaska, and through Amazon. It’s available in Nome at the ADF&G office.