The Alaska Department of Fish and Game and Sea Gypsy Research teamed up with Moore and Moore Films and Marni Productions to produce an 11-minute educational video that introduces the problem of Steller sea lion entanglement in marine debris.

During an eight-year study in Southeast Alaska and British Columbia, 388 stellar sea lions were documented as either being entangled in marine debris or having ingested fishing gear. About half of the animals had some sort of debris around their necks. While the other half had interacted with sport or commercial fisheries and had swallowed fishing gear. 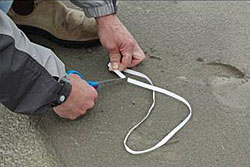 Loops of line or material, like this packing band, can kill marine animals. "Lose the loop" is part of a campaign encouraging people to cut loops that can entangle animals.

The video describes how sea lions become entangled, the most common sources of entangling debris, and what you can do to help reduce the number of entanglements. Be aware that the video shows some footage of entangled animals, which can be distressing for some people. Click on the title below to watch.