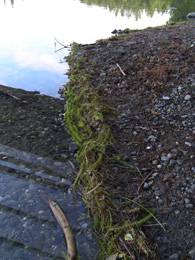 Elodea, an invasive non-native plant, on the shore of Sand Lake.

This year when you pull out your fishing gear in anticipation of your first outing, remember that some things have changed. You may have bumped into a number of folks at the sporting goods shop this spring with a new pair of wading boots tucked under their arm while picking up a supply of tackle and imitation eggs. Things may look a little different when you head to a hot spot on the river or to your favorite fishing hole, too. You and other freshwater anglers should be sporting a pair of wading boots with non-absorbent soles instead of what may have been an old standby, felt soled waders. As of January of this year, fresh water anglers are required to wear wading footwear with non-absorbent soles. Because felt waders have been identified as a mechanism for moving aquatic invasive species, the Alaska Board of Fisheries (the board) voted to prohibit their use in freshwaters of Alaska.

In early 2009, the board passed a proposal, submitted by a member of the public, that would ban the use of felt soled wading products in fresh waters of Southeast Alaska. The board agreed that if felt soled waders contributed in threatening native fisheries and habitats by successfully harboring invasive species, then taking that threat out of the picture was a good solution.

The angler who suggested the change in regulation was a member of the Juneau Chapter of Trout Unlimited. In California, he had seen what whirling disease does to the backbone of an infected rainbow trout, and was aware that areas where aquatic invasive species exhibit problems frequently coincide with popular fishing holes. Armed with research papers and previous success, Trout Unlimited proposed the board consider extending the ban on felt waders to all fresh waters of the state in 2010. The board passed that proposal as well. In order to allow Alaskans and nonresident anglers plenty of time to make the switch from felt to non-absorbent soled waders, the board decided the new regulation would go into effect in January 2012.

Bearing in mind the intent of the new regulation on wading footwear is to protect our valuable fisheries and the fresh water habitats on which they rely, there is considerable hope that anglers will comply. Granted, the absorbent material on the soled of fishing boots is not the only means by which invasive species can be introduced to our waters. Common pathways for intentional or accidental translocation of aquatic invasive plants and animals are illegally dumping unwanted live bait, or aquaria pets and plants; illegally transporting live animals and plants from one water body to another, boats, trailers, or floatplanes that aren’t cleaned between water bodies, and use of any gear in a pristine system after exposure to infested water. Even those new wading boots with non-absorbent material on the soles can be a culprit if they aren’t cleaned properly or thoroughly dried between waters. Decontamination of gear used in contaminated waters is the key to reducing your role in moving invasive species into new areas. 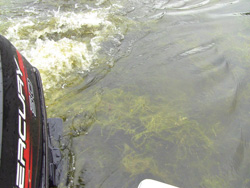 Fragmentation of Elodea by a boat motor. Elodea can easily spread when fragments of the plant are introduced to new locations. Like many invasive species, this plant is tough; it grows rapidly and can survive when lakes and rivers ice up.

The regulatory change effecting footwear was decided in the same year that a new invasive species was detected in Alaska. In the fall of 2010, U.S. Forest Service (USFS) biologists decided to ground truth a new aquatic plant guide that had recently been completed by the Alaska Department of Fish and Game (ADF&G) and the U.S. Fish and Wildlife Service (USFWS), in collaboration with Portland State University. On their first day in the field, they found a monoculture of an aquatic plant in Chena Slough. According to the pictures and description in plant guide, they’d found an undocumented population of the invasive plant Canadian waterweed (Elodea canadensis).

USFS ecologist, Trish Wurtz said, “It’s almost guaranteed,” that someone dumped it into the slough from an aquarium sometime in the past 10 years. Wurtz observed, “A bunch of red clay balls” (commonly found in aquaria) in the silt underneath a bridge in the slough.

Although the Canadian waterweed previously had not been observed in the Fairbanks area in 2010, there was one record of the plant from Eyak Lake in Cordova. To find out if Elodea had spread to other areas, Chugach National Forest completed surveys in 2011 in the Cordova area. The invader was observed in Alaganik Slough, McKinley Lake, and Martin Lake. USFWS will undertake more surveys in the National Forest during the 2012 field season.

An aquatic ecologist with the USFWS, Cecil Rich has experience with Elodea from his work down south before relocating to Alaska. When he learned that Elodea had been detected in Fairbanks and Cordova, he felt it necessary to do some surveys in the Anchorage Bowl. His shoreline surveys discovered the invasive waterweed growing in Sand, Delong, and Little Campbell lakes. This is concerning to state, federal and local natural resource agencies because floatplane pilots use Sand Lake, some of whom live on the lake and have planes tied up at their private docks. Elodea can easily cling to rudders and floats, as well as boat propellers, only to be deposited at the next water body. Both Nuttall’s and Canadian waterweed can easily spread when fragments of the plant are introduced to new locations. Like many invasive species, this plant is tough; it grows rapidly and can survive when lakes and rivers ice up.

According to Rich, the Sand Lake population is, “… just waiting to be spread by floatplanes to Lake Hood (at the Anchorage International Airport). Once in Lake Hood it could impede floatplane operations and result in unsafe conditions for pilots. Floatplanes could easily spread Elodea to other waters where it could affect boating, fishing and other recreational activities.”

Fast forward to the present, we now know that the plant found in Fairbanks is actually Nuttall’s waterweed (Elodea nuttallii), which has not previously been recorded in Alaska. We also have learned that the nonnative plant is growing in Chena River and Chena Lake. The Fairbanks Soil and Water Conservation District has taken a commanding role in surveying waters around Fairbanks, investigating control options, and organizing efforts statewide.

It is important to know how to identify and report invasive species, to know where aquatic invaders are established, and how to avoid transporting them to new areas.

Tammy Davis is the Invasive Species Program Lead for ADF&G.