The Brief Busy Life of the Arctic Bumblebee 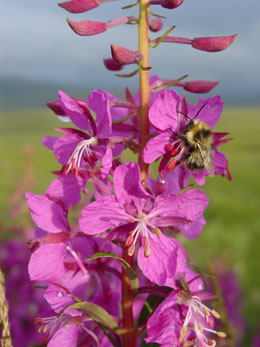 Big and hairy and social by nature, the Arctic bumblebee (Bombus polaris) is exquisitely adapted to life in the northern latitudes.

It’s late May and the Arctic tundra is still brown and half frozen, but spring is tugging at the roots of early flowering plants. The lousewort starts out tentatively, its leaves clutched in tight clusters the size of ping-pong balls, but soon enough it shoots up a wooly stalk, unfurls rows of pink blossoms, and welcomes its first visitor.

The sight of that first visitor can be startling. “You’re out there in the still frigid air and, gosh, there goes a bumblebee,” said Nome-based ADF&G Management Coordinator Peter Bente.

She has been hibernating for the past nine months at least, suspended in an almost lifeless state in a mouse nest or some other subterranean burrow, waiting for the ground to warm. Already mated, the queen is the sole survivor of her colony and she has no time to lose. Some insects take years to complete their life cycle in the Arctic. A moth caterpillar, clocked at 12 years to pupation, grows a bit each year, freezes, then grows a bit more. A bumblebee in the Arctic, however, must get busy right away, said biologist Bernd Heinrich.

“The caterpillar can freeze solid but the problem with bumblebees is they basically have to complete the social cycle in one month, or maybe two,” he said.

Heinrich, a retired entomology professor from the University of Vermont, is probably best known for his popular books on ravens. As a youth, he wanted to study them but said he was advised never to study an animal smarter than himself. Still, he has found that insects are pretty smart too. He marvels at the bees’ sophisticated solutions to problems and the delicate balance they maintain between energy costs and payoffs, which he details in his book "Bumblebee Economics."

He points out that Bombus has been evolving for some 100 million years since it broke from its wasp-like ancestors, compared to only two million years that humans have been on the scene. About fifty species are found in all kinds of habitats across the U.S., but they are most finely-tuned to life on the tundra. Through a process called thermoregulation, the bumblebee can raise its internal body temperature to as high as 38°C—comparable to that of a human—ensuring it’s active when other insects are still too cold to move.

Even resting on a flower with its wings folded across its back, the bumblebee can continue to generate heat by “shivering” its flight muscles, and the animal’s velvet coat helps retain the warmth. The term “cold blooded insect” is really a misnomer, according to University of Alaska Museum insect curator Derek Sikes.

“They don’t maintain these temperatures constantly the way warm-blooded mammals do, but they do reach warm temperatures from internal heat generation,” he said.

These are important features for B. polaris as she follows her busy schedule. Right now, she’s just a queen with no subjects and a date with death next fall. She has eggs to lay and the eggs must hatch out their larvae, which in turn must grow, pupate, and develop into adults. With time for only a couple of broods, she must also lay very large egg clutches. All this takes prodigious amounts of energy so she visits the early flowers, like the louseworts, the avens, and the willow catkins, pollinating as she goes. She is partial to monkshood (it can’t thrive without the bumblebees, its flower having evolved into the animal’s very size and shape) and other fragrant flowers. Heinrich said she gravitates towards flowers with multiple blooms where she can walk around and cool down a bit. She also seeks out nectar-heavy flowers. His studies show she burns a little hotter for them.

“Just exactly as we do. If we didn’t have coal, we would be very energy conservative. As long as we have lots of energy, we’re going to burn it like hell until it’s all gone. That’s what they do,” he said with a laugh.

As she sips nectar and feeds on protein-rich pollen, the queen has already started incubating her eggs internally. Other members of the B. polaris colony and other temperate bees store heat in the centrally-located thorax to minimize loss, but Heinrich has found the queen stores heat in her abdomen instead.

“They are basically speeding up the life cycle by incubating the eggs already in the abdomen and thus increasing the rate of egg production and egg growth,” he said.

The queen’s first batch will develop into workers bees: small sterile females who will enlarge the nest, forage, and tend to the next generation of bees. She will produce a second brood in late summer that includes males (called drones) and up to a hundred fertile females who are candidates for next year’s queen. The drones’ sole function before they die is to fertilize the females but most of the females will die too. Temperate bumblebee colonies generally produce hundreds of successful queens. In the Arctic, only one queen per colony on average will survive the winter to renew the life cycle.

And the old queen? She will die with her progeny. It’s a short life relative to our own, but an efficient one whose influence extends well beyond the bees’ realm. Heinrich said the bumblebees’ ability to fly at low temperatures and for long distances make them particularly important pollinators.

“Bumblebees carry the weight, especially if it stays cold,” he said. “If it gets warm, there’s a lot more fly pollination, and there’s actually some pollination by mosquitoes, as well.”

Cross pollination does more than help wildflowers, willows, and berries thrive. What’s good for birds and bees is good for larger mammals like moose and humans too, said Sikes.

“Pollinators play such an important role, not just for our economics and agriculture, but for the biodiversity of our wild plant species,” he said. “It’s easy to see the connection between plant life pollinators and birds, but insects also pollinate willow and willow is good food for moose.”

Two species of Bombus, B. polaris and its parasite, the “cuckoo bee” or B. hyperboreus, are among at least 12 species found in Alaska’s Arctic region.