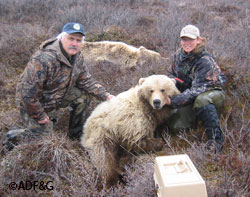 Brown bears tend to be called grizzly bears in Interior and northern Alaska, but they are all Ursus arctos. There is much to learn about their basic ecology, habitat needs, and how they are affected by hunting and resource development. Researchers are also refining the techniques used to study bears, implementing innovative survey methods and state of the art tracking and monitoring tools. The benefits of this work extends beyond Alaska.

“Brown bears are charismatic and of great interest to the world in terms of their ecology and conservation,” said Doug Larsen, Southeast Alaska’s Regional Supervisor for Wildlife. “Brown bears are highly valued by both consumptive and nonconsumptive users.”

One important source of information on brown bears comes from hunters, who are required to bring the hide and skull in to a Fish and Game office (or a representative) for examination and to provide some details about their hunt. Hunters take about 1,450 brown bears each year in Alaska on average, with harvests varying from one part of the state to another. The department’s sealing data indicates successful bear hunters generate about 6,300 days of recreational hunting each year. Hunters also contribute significantly to funding bear research, through license sales and excise taxes on guns and ammunition.

As part of the charge to sustainably manage brown bears across the state, the department annually conducts research, survey and inventory work to measure changes in the status of brown bear populations and their habitats; biologists also monitor the impacts of factors influencing the well being of brown bears. This information also helps the department work with the Alaska Board of Game to develop and implement appropriate harvest goals for distinct areas, and to partner with other agencies nationally and internationally to manage this valued species.

The department also provides the public with up-to-date information that improves public awareness about brown bears. This helps in making land use decisions, assessing predator management programs, and managing for public benefits.

Survey and Inventory work, including harvest and population data, helps identify trends in the sex and age composition of harvested bears and assess whether populations are increasing, decreasing, or stable in various parts of the state. Assessments are also made about harvest rates and the need to revise those rates through the Board of Game’s regulatory process. Simulation modeling helps wildlife managers understand the probable relationships between trends in available data and corresponding trends in bear populations. The department also assesses incidences of non-hunting mortality. To detect trends in bear densities, biologists use capture-recapture techniques, bear track counts, and conduct den surveys and aircraft population surveys.

Much of this information is made publicly available through the brown bear management reports, which are prepared every two years. The reports include historical and current data, management directions, methods, Board of Game actions, harvests and natural mortality, habitat assessments, and local and statewide non-regulatory issues. These reports are used by biologists, user-groups and land-management agencies to manage populations. 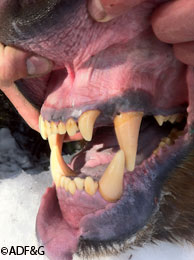 Biologists examine the teeth and mouth of an immobilized brown bear.

The State of Alaska manages the McNeil River State Game Refuge and the Pack Creek Bear Viewing Area, both of which are closed to bear hunting and managed for brown bear viewing during a summer season. These two areas attract more than 1,500 people each year who watch as many as 150 different brown bears. To insure a manageable numbers of visitors have a safe, quality experience, the wildlife viewers apply for a permit to visit the areas – permits for the Pack Creek on Admiralty Island in Southeast Alaska are generally available, while McNeil River permits are more coveted (apply early).

Studies on the North Slope help biologists understand brown bear interactions with oilfield activities and the basic ecology of brown bears along the mid-Beaufort coast (the largest oilfield area in the U.S.). These are the northernmost mainland brown bears (called grizzlies locally) in North America, overlapping the range of polar bears.

These studies help biologists understand population dynamics and habitat use, and help to reduce or minimize impacts of development on bear populations and allow harvest opportunities for hunters. Biologists use den detection research to develop den habitat models, which helps the oil industry detect denning grizzly bears and avoid them during winter exploration, transportation, and maintenance activities.

Biologists also monitor collared bears and use DNA analyses to assess human food-conditioning effects on bear productivity near oilfields. Ecological and demographic information can be used to develop mitigation strategies to avoid or minimize the effects of oil and gas exploration and production on the North Slope - and increase employee safety.

Aerial line transects involve flying over the ground in fixed-wing aircraft at about 500’ on predetermined compass bearings (transects) and counting bears seen along transects. This is an innovative way to obtain accurate and affordable population information for brown bears. It helps department staff manage bears by specific Game Management Units (There are 26 GMU areas across the state, ranging in size from 5,000 – 15,000 km2). The department obtained the first bear estimates for intermediate bear density areas in the state using this technique. This technique can also be and has been used to count black bears in some parts of the state.

Biologists have been able to reliably estimate the Kenai Peninsula population and determine the population’s level of risk. Historically, the harvest of brown bears on the peninsula has exceeded estimates of sustained yield, which has required that the department shorten the hunting seasons on several occasions. The department identified the population as a “Population of Special Concern” back in the 1990s. Brown bear immigration/emigration on the Peninsula is minimal so increases in population may arise from internal recruitment alone. A recent study helped determine the geographic range of Kenai Peninsula brown bears, which extends east across the ice fields to Prince William Sound. Biological samples have been taken of brown bear living just north of the Peninsula for genetic comparison to Kenai Peninsula bears. 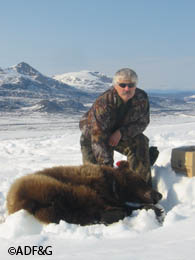 An immobilized brown bear is equipped with a tracking collar.

Biologists obtained information on brown bear habitat requirements to predict the effects of landscape-scale changes on the peninsula’s brown bear population. Bears have been radio-collared, blood and tissues samples have been analyzed from collared and sealed bears, snaring techniques have been deployed in areas impossible to get to by air, and scat samples have also been collected on salmon streams. This study helps map bear locations and identify habitat uses, delineate peninsula-wide species range, and identify discrete travel corridors, which in turn helps department staff understand the ecology of the Kenai Peninsula brown bear population. The determination of population size, trend, and resource requirements has provided managers with information critical to responsible management decisions about hunting season length, bag limits, and calculations of sustained yield.

The demand for hunting and viewing opportunities of brown bears along the mainland coast of Southeast Alaska has been increasing. Research helps biologists understand their movements, home ranges, and spatial use patterns with relation to habitat types – and historically, little has been documented about these populations.

Biologists have used GPS radio-collars on bears to map spatial distribution and have analyzed tissue and hair samples for population information. Biologists have been able to determine available harvest levels and devise management strategies based on assessed potential vulnerabilities of brown bears to human activities along the coast. Biologists have also recorded movements across international borders (Canada/US) to look at effects of proposed mineral development and associated roads in adjacent British Columbia that impact Southeast Alaska’s brown bear populations. Information has also been used to evaluate and refine the Tongass National Forest’s Forest Service standards and guides for riparian habitat management for brown bears.

These are a few examples of brown bear research in Alaska. There is a growing national and international interest in brown bear management.

“Interest in brown bear conservation is international in scope and here in Alaska we have unique opportunities to develop techniques and findings that can be applied to bear management and conservation in Alaska as well as elsewhere in the world,” said Doug Larsen.

Amy Pinney is the Federal Aid Coordinator for the Division of Wildlife Conservation in Juneau. Doug Larsen and Riley Woodford contributed to this article.