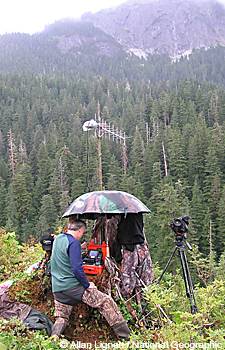 The bears escaped - as planned, without even noticing they'd been snared - but they left woolly brown hair in the traps. Like a burglar leaving his driver's license at the scene of a crime, that hair tells biologists exactly who was there. Alaska Department of Fish and Game researchers hope genetic material - DNA - extracted from the hair samples will help them identify every brown bear in the area, and learn how and when the bears use the area's salmon streams.

"We're looking at the hierarchy of bears on the streams," Lewis said. "We're also looking at how the males and females are distributed and when they use the different areas."

The study in Northern Southeast Alaska is a unique blend of cutting edge molecular biology and low-tech ingenuity. The technique grew from the observation that animals ducking beneath a barbed wire fence leave tufts of hair snagged on the barbs. Researchers began stringing fence wire to deliberately snag hair.

"Earlier methods used in Lower 48 studies involved the use of an attractant," said state wildlife biologist Rod Flynn of Douglas. "This is where bears are fairly low density, not like Southeast Alaska where you have a bear behind every bush."

In Southeast Alaska, no bait or lure is needed. In fact, the higher density of bears in Southeast posed a problem.

"A strand of wire might collect six samples - but are they from six bears or one bear passing six times," Flynn said. "We started using these neck snares. LaVern Beier came up with this approach, using his vast experiencing catching bears." 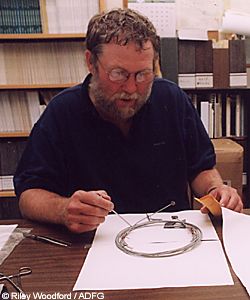 Alaska brown bear researcher Rod Flynn removes wooly tufts of brown bear hair from a snare in his Douglas office. The DNA from the hair will "fingerprint" the individual bear.

Beier tested prototypes last year and fine-tuned the hair snare and the placement technique this summer.

"It's a loop of wire with a strand of barbed wire attached," Flynn said. "The snare loops over the neck, tightens slightly and then breaks. As it tightens, a bit of hair is pulled out. It assures us it's one bear, one time."

The snare is anchored and lies beside the trail or stream when a successful "capture" is made. Beier and Lewis have 200 snares divided between two salmon streams. Each week in August they walked the streams, replacing tripped snares with fresh ones. The snares were returned to Douglas for cleaning, and the hair samples were sent to a lab in British Columbia that specializes in brown bear research.
Back in Douglas, researchers Grey Pendleton and Rod Flynn plucked tufts of hair from the barbs with tweezers.

"An animal's DNA is essentially the same as an ear tag," said Pendleton. "It marks the individual. We've been studying bears on Chichagof since 1989 and some of our data goes back that far. We have a lot of known individual bears already and we have their DNA samples, so we can compare them."

"Hair will be taken from a suspect, and from the victim of a crime," Jennings said. "If the suspect has the victim's DNA somewhere - or if the victim has some of the suspect's DNA - that's pretty strong evidence." 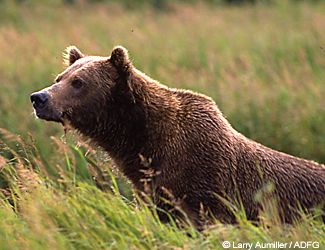 By unobtrusively snagging a few tufts of hair with a snare, scientists can learn valuable information about brown bears.

The hair is sent to the Scientific Crime Detection Laboratory in Anchorage, where forensic scientists like Abi Chidambaram create a genetic profile. A single hair is enough, if the follicle or bulb is attached.

"You can extract quite a bit of DNA for testing as long as the hair has a nice root, and pulled hair usually does," Chidambaram said.

The DNA also reveals the gender, and that applies to people and bears. "If there's a Y chromosome, you can be sure it's male," she said.

The genetic profile is like a molecular fingerprint. It's unique for every person - with the exception of identical twins. Identical siblings come from the same sperm and ova and share the exact same genetic material. Members of the same family will share more similarities in their genetic profiles than unrelated individuals, and members of a small, isolated population share more in common genetically than a large population.

"There's so much you can tell about animals from DNA," Chidambaram said, for example, how closely related animals are and how much inbreeding occurs in a population.

Beier, Lewis and the Fish and Game researchers have also equipped almost two dozen Chichagof bears with GPS collars to track their movements. Combined with the data from the hair samples, scientists will gain valuable insights into the life of these bears.

One question about the North Chichagof bear population looms large, and researchers are optimistic that the data from hundreds of hair samples collected throughout the month of August will soon provide an answer.

"How many bears are out there? That's the 65-million-dollar question," Pendleton said.