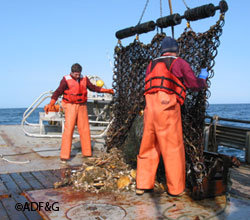 A scallop research dredge is brought aboard during 2007 work to develop the CamSled scallop survey methods. Photo by Jeff Barnhart.

The Alaska scallop fishery is based upon the weathervane scallop, also called the giant Pacific scallop, Patinopecten caurinus. Scallops are not only tasty, but quite an interesting and unusual bivalve species as well. Unlike most bivalves (clams and mussels), scallops cannot burrow to escape predation, but instead they detect predators with primitive ‘eyes’ and have limited ability to swim away by rapid opening and closing of their shells. Scallops require a very large adductor, ‘hinge’ muscle, to maintain this ability. This muscle is what we think of as a “scallop,” although it is only one part of the animal.

Scallops are dioecious (have two sexes), are broadcast spawners, and reproduce by assembling and releasing clouds of gametes (eggs and sperm) which are fertilized in the water column. The signal for scallops to assemble and spawn is thought to be increasing water temperature and in Alaska spawning occurs in May and early June. Fertilized eggs settle to the bottom where they develop after a few days into a tiny transparent-shelled veliger larvae. The veliger larvae swims into the water column where it feeds on microplankton (small free-floating plants) for a period of about three weeks before settling to the bottom to begin its life as a benthic (bottom-dwelling) filter feeder.

Weathervane scallops begin reproducing at three or four years of age at a shell height of about three inches, and are commercially harvestable at about four inches shell height and six to eight years of age. Scallops can live about 28 years in Alaska. Like other bivalve mollusks, scallops are aged by counting the rings on their shell, which are formed by alternating periods of slow and fast growth associated with seasonal changes in temperature and food availability. The two valves of scallop shells are not identical, and the scallop body lies on the bottom valve, which is more rounded in shape, while the top valve is flatter. Adult scallops assemble in dense ‘beds’; these have a characteristic oblong shape, with the longer axis parallel with the direction of the prevailing current.

Weathervane scallop beds in Alaska are located on mud, clay, sand or gravel substrate at depths of 120 to 390 feet in the Gulf of Alaska and Bering Sea. Scallops are captured using standard New Bedford style scallop dredges that are on average 15 feet wide and weigh about 2,600 pounds. The frame provides a rigid, fixed dredge opening to which a steel ring bag (consisting of 4-inch rings linked together) is attached to collect the scallops as the dredge is towed. In response to an influx of vessels from the east coast, a vessel moratorium was implemented in state waters in 1997; eight vessels currently hold vessel-based entry permits. In a further effort to increase economic efficiency, permit holders created a scallop fishing cooperative in 2000. Some cooperative members opted to remove their boats from the fishery and arranged for their shares to be caught by other members of the cooperative, providing the remaining vessels with additional fishing opportunity. In recent seasons, only four vessels on average have participated in the fishery. This fleet of 70 to 120-ft vessels each has a crew of eight to twelve, who shuck and freeze the scallops onboard the vessels. Most of the scallops produced are marketed directly by the cooperative. Except in the Cook Inlet area, all commercial scallop fishing vessels are required to carry trained observers. 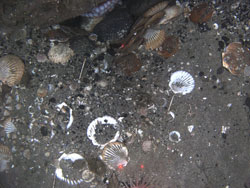 Management of Alaskan scallop fishery harvest is achieved using “guideline harvest levels” (GHLs), which are established at the beginning of each fishing season. In addition to GHLs, most scallop fisheries have crab bycatch limits. Fisheries are closed when either GHLs or bycatch limits are met. Large areas of productive scallop habitat are also closed to scallop dredging as an additional precautionary measure to maintain fishery productivity.

The management regime requires preseason, inseason, and long-term information. Preseason information on population size and health is needed to set biologically appropriate GHLs. Inseason, observers regularly submit information on scallop harvest and crab bycatch which is used to close the fishery when limits are met. Information on scallop biology (growth rates, size at maturity, and maximum age) is needed to help evaluate stock condition and productivity to further refine regulations.

Observers are deployed onboard commercial scallop vessels for up to 90 days. As scallop vessels fish in the exposed waters of the Gulf of Alaska and Bering Sea from July through February, conditions can range from 70 °F and flat calm to 20 °F, big seas and freezing spray––this is a job for a very tough biologist. This is particularly true because the vessels process scallop meats onboard and can stay at sea for extended periods. You can fit an awful lot more frozen scallop meat into a freezer than shells-on scallops into a hold, so it takes a long time to fill up a vessel.

A Day in the Life of a Scallop Fishery Observer

The typical day of an observer begins to the sound of dredges being hauled, as scallop vessels operate around the clock, making 15 to 21 dredge tows daily. After getting out of their 3 by 7-ft bunk––the only space on the boat they can call their own––they join the crew as they break for a hearty breakfast. The observer next checks in with the captain on plans for the day, dons raingear, and heads out on deck to sample a tow. The crew brings the dredge aboard and empties its contents onto the deck where they collect scallop “keepers.” The observer collects discards; identifies, counts, and measures bycatch species; counts empty scallop shells or “clappers,” and then settles in to sample scallops. All scallop discard is weighed and counted. Subsamples of intact discards and keepers are sampled. Scallop sampling consists of weighing and measuring the shell height of 20, and collecting the top valve from two of these for aging. Between dredge tows, the observer cleans and labels valves collected for aging and documents processed scallop meat weight and vessel activities. At the end of the day, the observer summarizes harvest, fishing effort, catch sampling effort and crab bycatch. This information is reported to ADF&G on a tri-weekly or daily basis depending upon how closely harvest or bycatch limits are being approached. 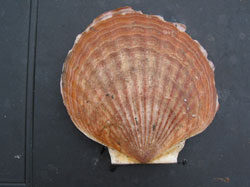 “An observer's daily schedule is flexible and dependent upon what the vessel is doing––an average work day is 10 to 14 hours. Most days are fairly routine, consisting of catch sampling, production documentation and data summarization––all while living and interacting with the crew,” says Observer Coordinator Ryan Burt.

Observer data on the location and content of dredge tows has been used to map scallop beds in Alaskan waters. Information on bed boundaries is critical to the design of surveys to estimate population size. Population estimation is currently conducted for only a portion of scallop beds but efforts are underway to develop towed-camera methods to survey beds. Our knowledge of bed boundaries will permit us to expand towed-camera estimates of scallop density to bed-specific scallop population estimates.

“We use logbook data from the observer program to help decide where to sample with the camera sled and dredge tows, and we now go to sea on scallop industry vessels for research surveys. We've developed a good working relationship with Alaska scallop vessel operators through the observer program,” says Scallop Biometrician Gregg Rosenkranz.

The scallop size-composition provides indications of when a strong young scallop age-class enters the fishery, or when truncation of the size composition occurs as older scallops are removed without sufficient replacement. Thus, size-composition information is indicative of population trends, and when population estimates are unavailable, is used to adjust scallop GHLs.

Shells collected by observers have been used to age scallops to determine their growth rates. One interesting outcome is that growth is much slower in the eastern than western Gulf of Alaska and that there has been a reduction over time in the maximum size reached by eastern gulf scallops. A better understanding of whether these differences are entirely environmental or have a human component could help in refining scallop management. The clappers collected are used to determine natural mortality rate, which is important in establishing harvest rates for the fishery.

The scallop observer program is an example of ADF&G and industry cooperation at its best; and results in better mutual understanding, leading to improvements in fishery and management efficiency, stock assessment, and fishery sustainability.

Gretchen Bishop is a Marine Fisheries Research Biologist for the Alaska Department of Fish and Game in the Juneau Headquarters Office.