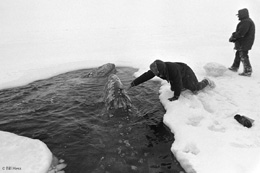 Biologist Geoff Carroll touches one of the grey whales trapped in the ice near Barrow in 1988. Carroll was part of "Operation Breakthrough," as it was known at the time. Photo courtesy Bill Hess.

He has survived two airplane crashes in bush Alaska. He has fought off an angry polar bear with only a jammed-shotgun-turned-baseball-bat. He has been driven to the North Pole – by sled dogs. And he has looked into the eye of a whale, touched its head, and lived to tell the tale.

What sounds like a script for the "Most Interesting Man in the World" is actually reality for Geoff Carroll, Area Wildlife Biologist for the Alaska Department of Fish and Game (ADF&G). Geoff runs Fish and Game's one-person office in Barrow, Alaska, the northernmost city in America.

Originally from a ranch near Sheridan, Wyoming, Geoff took a little vacation to Alaska in his early 20s and – like a lot of visitors – Alaska seeped into his blood, and he never really left. He attended the University of Alaska Fairbanks and graduated with a bachelor of science in wildlife management. His passion was whales, so he traveled to Barrow and started an annual bowhead whale census. He enjoyed the ice work so much that he was a member of a National Geographic sponsored 56-day dog sled expedition to the North Pole. Eventually, he moved to Barrow permanently.

In 1988 – one year prior to coming on-board with ADF&G – Geoff was working for the North Slope Borough’s (NSB) Department of Wildlife Management. Despite not having his character cast a role in the 2012 blockbuster film “Big Miracle,” Geoff played a valuable and essential role in Operation Breakthrough, the international struggle to free three California grey whales trapped in the ice in the Beaufort Sea near Point Barrow.

Geoff first heard about the whales from a local whaler, Roy Ahmaogak, who was out scouting on the sea ice. After hearing the report, a small group, including Geoff, decided to travel by snowmachine on the 30-40 minute journey to the only breathing hole left open in the progressing sea ice. “It was a remarkable situation, like nothing we had seen before. We took a few pictures and thought, since we might not see this again, it might be good to get a video of this,” said Geoff. The group, in amazement, headed back to town and asked the local television station if they could borrow a video camera. The station was hesitant to loan out the camera, instead sending a cameraman and Geoff’s wife Marie, who ran the NSB Information Office, out with the locals. They took footage and did a quick impromptu interview which eventually made its way to Channel 2 in Anchorage. “Somehow it got into the national news and exploded from there. We were surprised when it went international. We had no anticipation of that,” Geoff explained.

Within days, Barrow was transformed from a sleepy secluded village to the bustling backdrop of a dramatic media zoo. In town, visiting journalists and public relations campaigners were scrambling for their next story. Out on the ice, the whales were fighting to survive, taking turns surfacing to breathe as the ice got thicker and the nights grew colder. The whales’ friends on the surface were nothing less than a captive audience. For a whale biologist like Geoff, it was a windfall. Around the world, there are some toothed whales in captivity, but it was a rare instance to have baleen whales to study and interact with for three weeks in one’s back yard. “The opportunity to work with a species of animals you don’t often get to work with up close and personal was really an interesting time for us as biologists,” Geoff described. 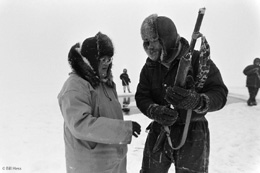 Marie Carroll prepares to leave the whales and return home to Barrow by snowmachine. Geoff hands her a shotgun as bear protection. Photo courtesy Bill Hess.

As the world scurried to make sense of these events and to try to put into motion a series of creative albeit hapless solutions, Geoff along with other local residents worked with the whales every single day. The one initial breathing hole was getting smaller and smaller each hour. “[Fellow biologist] Craig George came up with the idea to use a chainsaw to make the hole larger for the whales. It was pretty grim watching the hole get smaller and smaller. The only thing that was keeping the hole open was the whales coming up every five minutes and stirring up the water,” Geoff said. It then occurred to them that maybe they could cut another hole. “The whales were really reluctant to leaving their original hole; they saw it as their lifeline.”

Fortunately, two gentlemen from Minnesota were sitting in their living room watching the story unfold on television, and they saw the plight of the whales. They worked for a company called Kasco Marine which manufactured water circulators. Uninvited and unannounced, they jumped in an airplane and brought their water circulators up to the top of the world. “We noticed the whales were attracted to those circulators. The whales would orient on those things, and they were also attracted to lights.” Geoff and crew began using the circulators and portable lights to train the whales to move from hole to hole. “It was quite a process to teach the whales to move from one hole to the next, but after a few days, the whales learned that it was safe. That was the big victory for us.”

For a whale biologist turned whale-trainer, it seemed like almost non-stop that he was out with the whales. Most of the training took place at night when the media circus had scattered. “I know we would sleep every once in a while, but there was so little sleep that it’s all a blur.” Geoff and his Iñupiaq wife, Marie, also had a brand new baby at home, too. “One night, the 60 Minutes crew showed up at our house at 3:00 o’clock in the morning, and my wife had to go out and read them the riot act and chase them off.” Geoff continues, “The operation was a family effort for us. While a bunch of us were out there cutting holes in the ice and moving the whales along, Marie and the NSB mayor were on the Russian icebreaker trying to keep them from running over the whales.” Geoff was in high demand, by both the media and the whales. He preferred interacting with the whales. “You could get just as close [to the whales] as you wanted. Spending so much time with them, it was like having a pet dog around. You start to feel affection and compassion for them.”

While the U.S. government was trying major herculean efforts like airlifting a hover-barge and negotiating with the Soviets for icebreaker help, Geoff and a handful of other locals were out there getting their hands dirty – and cold. Working together in negative double-digit temperatures with chainsaws and simple tools, they came up with a really clever and effective technique to cut holes about 20 feet wide and 40 feet long for a total of four miles of sprawling holes. The water circulator machines helped keep old holes clear while new holes could be cut. “Eventually the whales were just zipping up and down the line of holes. They were pretty happy with it.” For Geoff, this was the most climatic moment of those exhausting weeks on the ice. “Sure, there was a happy ending in the movie, but in reality, the whales’ fate was up in the air. Nobody ever really knew what happened to them.” 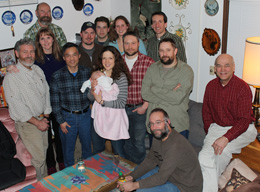 Geoff still loves whales, and he still enjoys ice work. But a lot has changed since 1988. “If anything, it’s a stark reminder of how the climate has changed up here. [The whale rescue] started in the second week of October in 1988, and folks were driving trucks across the ice, and the large ice ridge had already formed. But in recent years it’s largely been open water in that same area until close to Christmas.” In the face of climate change’s complexities, Geoff still has some major challenges at hand.

As ADF&G’s Area Wildlife Biologist, Geoff looks after all the land mammals on 56,000 square miles of the North Slope. To put size in perspective, his territory is an area larger than the entire state of New York. It’s a challenging environment, but rewarding nonetheless. “Our caribou work is absolutely world-class. We do a better job of managing caribou in northern Alaska than any place in the world.” Geoff is quick to equate this success to a team effort. “Ever since I started working for Region 5, we’ve just had this fantastic group of people, really good, knowledgeable area biologists and other staff. The Region 5 staff is like an extended family. For some reason, we’ve always been able to get along really well. One of the greatest joys of working for Fish and Game is working with a totally competent outfit – a totally competent bunch of people.”

It is clear this whale-training team player has also moved mountains as a staff mentor. When pondering his greatest contribution to ADF&G, he responded, “I took on a student intern named Lincoln Parrett that grew up in Kaktovik and Barrow. He now does a very good job as our Arctic Caribou research biologist and has taken on most of the load for caribou work.” Perhaps one of Geoff’s greatest traits is recognizing potential and coaching it from the get-go – much like he did with his whales, much like he did with his up-and-coming intern.

Geoff modestly explains, “It’s been a good run.” But for the man who – for ninety five percent of the last 20 years – has commuted to the office by skis, bicycle, or skijoring, and has dogsledded to all the villages in Unit 26A (he gets a lot better reception when he shows up by dogsled than by airplane), it’s definitely been more than a ‘good run.’ When he’s not wrangling muskoxen or helping to manage arctic caribou and moose herds, Geoff is a total generalist for his region: selling hunting licenses, staffing the office, and doing public and educational outreach. He is truly a jack of all trades, and just very likely – one of the most interesting men in the world.

Candice Bressler is the statewide Workforce Development Program Coordinator for the Alaska Department of Fish and Game. The black and white photos were taken during the whale rescue efforts by Bill Hess, who generously granted permission for their use. He documented the rescue efforts and his work can be seen at: http://www.logbookwasilla.com/logbookwasilla/tag/marie-carroll (See the bottom of Hess's page for a complete series index).