Asking people to hunt more moose hardly seems like a problem. But after telling three generations of people not to harvest moose, specifically cows; it may be difficult to tell people to do otherwise.

Historically, up until the late 1980s, moose on the Lower Yukon existed at very low levels and most areas had few or no moose at all. Of the few moose that were present, people harvested a high percentage of both bulls and cows which prevented the population from growing in otherwise suitable habitat.

Suitable moose habitat and a desire amongst local people to have more moose close to home led to specific wildlife management objectives directed at moose population growth and expansion. The objective was to simply allow moose to fill the available habitat. Cooperative efforts between local people and biologists over a long steady period achieved the desired result. Moose abundance on the Lower Yukon has improved dramatically. In fact, moose are now so plentiful there is currently a large harvestable moose surplus!

In the early 80’s and before, if a moose was spotted, it was hunted until it was on the table. Because moose were so hard to come by, people on the lower Yukon had to travel quite far up river toward larger populations to find moose. Some people were traveling in excess of 200 miles, from villages of Emmonak, Kotlik, Alakanuk to the lower portions of the Innoko River near Holy Cross and up to Shageluk. Traveling long distances to find moose accompanied by rising gas prices created hardship.

Locals and biologists with Alaska Department of Fish and Game (ADF&G) and Fish and Wildlife Service (USFWS) knew the habitat could support more moose and they wanted the moose population to grow, so they agreed to a five year moratorium with no hunting. If the moose population was to grow, managers told residents, moose needed to be left alone for awhile. People eventually understood. “A short-term hardship was endured by local people to gain a long-term benefit”, said Phil Perry, Alaska Department of Fish and Game Area Biologist in Bethel.

Throughout the moratorium, put into place in 1992, biologists conducted aerial surveys and used minimum counts to estimate population size. In 1988 and 1989, no moose were counted. In 1992, 28 moose were counted, in 1994, 65 moose were counted, it was clear the population was growing. In the late 80’s, ADF&G and USFWS had a check point on the river and counted the number of hunters traveling and looked at the harvest amounts and locations. Early on, the checkpoint was busy with moose hunting traffic traveling upriver to hunt moose. After moose hunting reopened down river, fewer people where coming through the check point from the lower part of the river. That indicated a big shift in where moose were located. This was good timing in early 2000 because gas prices were rising. With moose more plentiful in the Mountain Village area, people didn’t have to travel as far to fill their freezers. 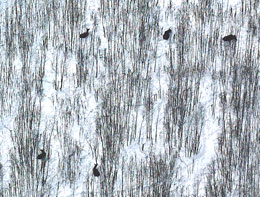 A key player in the whole process in the 1980s until the mid-1990s was Randy Kacyon, the area biologist at Bethel. He died in an airplane crash while working on a moose survey in the lower Yukon River in the mid-1990's. Regional supervisor Steve Machida said the lion's share of the credit goes to Kacyon for getting the moose moratorium established; he did all the grunt work getting the public and Yukon Delta National Wildlife Refuge support consolidated so that it could go forward at the Board of Game and at the Federal Subsistence Board level.

According to a Public Service Announcement issued by the Department in May of 2011, things are looking good for moose on the Lower Yukon. “The moose population in this portion of Unit 18 was estimated at 3,300 moose in 2008. Since then, other indicators such as composition and twinning rates suggest that this population is still experiencing rapid growth. Winter harvests in the past 5 years have fluctuated between 30 and 60 moose, with roughly 50% of those being cows and 50% bulls. Additional harvest at this time may help to slow the growth of this population while maintaining a high density and additional hunting opportunities.”

Good habitat, plentiful cow moose, and great compliance has really resonated with people. Roger Seavoy, ADF&G biologist now working in McGrath, illustrated this point when he recounted a recent moose hunt with is nephew. “My nephew saw a moose, but decided not to shoot it because it was too small”. You wouldn’t have heard a story like that two decades ago. This is a great indication that the moose population has grown and in general, people feel food security. 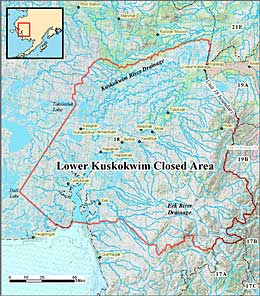 A map of the area that was closed to hunting while the population rebounded.

It’s an enviable situation, to be flush with moose, but just as before, it’s a situation whose success will rely on clear communication and cooperation with local residents. Steps to reduce the population back down to sustainable numbers are already being taken. Recently the Board of Game passed proposals to increase the bag limit to two moose per year and lengthen the moose hunting season. Hunting more moose, specifically cows, is a change in hunting behavior that needs to happen soon. If the moose population cannot be contained within the numbers the habitat can support, the population could crash. This could reduce populations to the point that regulations restricting seasons and bag limits would be necessary again.

Controlling harvest levels is one of the best tools managers have to dampen the extreme highs and lows of moose population cycles. “If we hunt too many, there is no buffer of ‘extra’ animals to keep the population healthy and when weather or other factors come into play, the population goes down. If we don’t hunt enough and the population gets too high, the animals can eat themselves out of house and home, causing crashes we hope to avoid,” said Phil Perry, the Bethel Area Biologist.

Currently moose numbers in the Lower Yukon are very high and there is no sign population growth is about to slow down. Taking more moose, especially cows, is needed to reduce numbers to levels that the habitat can support. Just as moose populations are dynamic, hunting pressure also needs to be. The moose population on the Lower Yukon is an excellent example that illustrates how wildlife managers working in cooperation with local people can yield result in wildlife population successes that benefit wildlife, habitat, and people by putting more meat in the freezer.

Meghan Nedwick is an education specialist with the Division of Wildlife Conservation in Kotzebue.