Why Don’t We Grow Red King Crabs
in Hatcheries Like Salmon?

Juvenile king crabs on the artificial substrate, a key component to raising the crabs.

During the early 1960s the Kodiak red king crab fishery was booming. It crashed within the decade; 40 years later it has not recovered and the fishery has been closed since 1982. From 1969 to 1980, the Bering Sea and Bristol Bay harvests went from 8.6 million pounds to a record catch of 130 million pounds, but by the early 1980s, harvests had plummeted. Out of eight red king crab fisheries in Alaska, only three—Bristol Bay, Norton Sound, and recently Southeast Alaska—are active, if much smaller, fisheries. Researchers cite overfishing of the declining stock and environmental changes for the collapse. Why don’t we just grow red king crab in hatcheries like salmon?

As far back as 1991, the Alaska Department of Fish and Game (ADF&G) considered raising king crab in a hatchery environment for release into the wild. In the early 1990s, the Fisheries Rehabilitation, Enhancement and Development division addressed the king crab fishery collapse with a systematic approach of three phases. Phase one involved collaboration with other agencies, communication with user groups, starting a pilot hatchery, and — should the pilot hatchery be successful — selecting a site for Kodiak king crab development. Phases two and three expand on the king crab development center, genetic stock identification, nearshore marine habitat surveys and structure evaluation, and expansion of production facilities to other areas of the state.

In 1992, the International King Crab Rehabilitation and Enhancement Symposium in Anchorage brought scientists from Japan, Chile, Norway, Canada, and the United States (Alaska, California, Maine, and Washington state), and representatives from the National Marine Fisheries Service, the University of Alaska and ADF&G. The purpose of the symposium was to document the types of juvenile king crab research happening around the globe and apply it to Alaska’s depleted stocks. Symposium participants were encouraged to evaluate Alaska’s stock crash, consider current king crab stock restoration research and tools, and provide recommendations on a course of action.

Worldwide, shellfish hatchery research at the time was still in its infancy, and although the presentations touched on pertinent topics—migration, hatchery-reared lobsters, viable crab substrate, life cycle studies, and cannibalism — not enough information was available to launch a successful crab restoration program.

Alaska’s salmon hatcheries have been successful for several reasons:

1) pink and chum salmon are short-lived

4) the state pathology lab’s “Regulations Changes, Policies and Guidelines for Alaska Fish and Shellfish Health and Disease Control,” whose purpose is to establish aquaculture policies to prevent finfish and shellfish diseases both inside the hatcheries and from being released into the wild populations.

Alaska’s hatcheries also have the Finfish Genetics Policy, which was developed in response to concerns that a hatchery system could be detrimental to wild salmon stock. Thermal marking helps to monitor mixed-stock fisheries.

4) the publication cited above does not cover crab.

While crab restoration projects are still in their infancy, research, policy development, and permitting are ongoing.

In 2007, the Alaska King Crab Research, Rehabilitation and Biology (AKCRRAB) Program was formed to research red and blue king crab restoration possibilities. The AKCRRAB program is a cooperative effort of Alaska Sea Grant, the Alutiiq Pride Shellfish Hatchery, NOAA Fisheries, ADF&G, and the University of Alaska Fairbanks School of Fisheries and Ocean Sciences. The program is guided by a steering committee, while a team of scientists and scientific advisors guide research efforts.

ADF&G‘s role in AKCRRAB is advisory, and most of their focus is on permitting and policy development, which seeks to minimize the risks cultivated crab released into the wild might pose to wild stocks.

“There is a lot of life history information we don’t know yet, so it’s difficult to know the risk,” said Cynthia Pring-Ham, a fishery biologist with ADF&G. “Right now, there is nothing in our regulations dealing with invertebrates, so now it’s more appropriate to develop policy, as there are already regulations in place that oversee management of resources.” 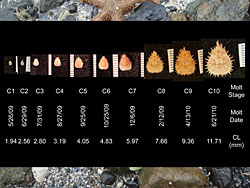 A look at the stages of development of juvenile king crabs.

Factors ADF&G considers when evaluating development or permitting of hatchery operations include the following:

The Alutiiq Pride Shellfish Hatchery in Seward cultivates larvae from wild caught crab. Between 2007 and 2010 their red king crab hatchery production has risen from 1,000 juveniles to over 100,000 juveniles, providing an abundance of animals for use in research projects.

Challenges culturing juveniles include a high rate of cannibalism, achieving the right shell color, and maintaining a healthy growth rate. Grouping juveniles by size has reduced cannibalism, and Astaxanthin, a carotenoid and food supplement, has given the crab shells a darker, redder color, which helps increase juvenile survival rates. With the addition of calcium to the juvenile diet, their growth has increased as well.

Miranda Westphal, a fishery biologist at ADF&G, recently completed a two-year project comparing juvenile red king crab growth in the lab to juvenile crab growth in the wild. She did a daily growth check for two years, and she compared it to the growth data collected from juvenile crabs living in Auke Bay. Crabs go through several life stages, and in the early larval stages they don’t look like crabs.

After hatching, red king crab go through four zoeal stages, lasting a total of about 40 days. The next stage is the glaucothoe stage, which lasts three to eight weeks. During this stage, they are searching for a complex substrate habitat (tiny coral-like animals called bryozoans are a favorite) as they transition from a free-floating organism to one settled on a benthic environment. Once they have found suitable habitat to settle into, they molt and lose the ability swim—and that’s when they start to become cannibalistic. In the wild, juvenile are solitary and spread out, so cannibalism is not the huge concern it is in a laboratory. In their first year, crabs will molt 10 to 12 times; in their second year, they will molt 4 to 6 times.

Data from Westphal’s study showed that the mean molt intervals and growth rates of hatchery-reared crab and wild crab are similar. Survival rates for both were similar (very high) as well, despite the higher initial stressors imposed on the hatchery stock. “First they’re packed in coolers, then they’re flown to Juneau, then they usually stay overnight in a freezer before arriving at the lab and being unpacked,” she explained.

Her Bering Sea hatchery stock was cultivated at the Alutiiq Pride Shellfish Hatchery and arrived in Juneau in the glaucothoe stage. “Cannibalism starts right after the glaucothoe stage,” she said, and, with this in mind, she immediately put 300 juveniles in separate rearing containers in a seawater tank. Crowding a lot of juveniles in the same tank guarantees ferocious cannibalism. “In three or four weeks, it gets really noticeable; about half the crab are gone.”

“Juvenile crabs younger than two years are more cannibalistic than those older than two years,” she said. “It really depends on the density and life stage; in the wild, adults trend in pods, juveniles don’t — they’re cryptic and solitary.”

Tending 300 individual rearing containers and collecting data was a full-time job. “They have their own personalities,” she said. “They’d reach up to me when I’d come by with food; I definitely had my favorites.”

Now that her study is finished, she will write a scientific paper detailing her methods and results. In the meantime, her crabs continue to live at the UAF Fisheries and Ocean Sciences lab. “Releasing them is not an option; our permit doesn’t cover that. They’re on their fourth year of living the good life out at the lab.” They are currently serving as donors for data being collected on blood chemistry, growth hormones, and genetic information.

Although Westphal’s study did not focus exclusively on cannibalism, it is such a large, expensive issue that it’s always a consideration, as raising crab in individual containers is not economically efficient for a large-scale hatchery operation. 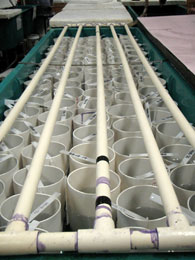 “In the hatchery, their molt into the first juvenile stage is synchronous. All the crabs are vulnerable at the same time. As they mature, their molts become asynchronous, and that’s when they are most vulnerable to being eaten,” said Ben Daly, a research biologist with the Alaska Sea Grant program.

Daly discovered that a structure well stocked with artificial seaweed helped reduce cannibalism. “Increasing the efficient use of space gives them more opportunity to hide.” Complex substrate also reduces predation, and cannibalism is a type of predation. If the juvenile crabs are successfully hidden from each other, they eat each other less often.

And that artificial seaweed can’t just be any old type of plastic crafty stuff that you might buy at a Jo-Ann Fabric and Crafts store. “We tried doing that,” Westphal said, of her trip to Jo-Ann’s with a colleague for a habitat selection study. “We’d hold up types of lace and ask each other ‘Does this look like bryozoa?’ and it just didn’t work.”

Eventually they tried a type of artificial seaweed used for cultured fish, available from Japan at a cost of $5,000 for a 200 meter roll. At a casual glance it looks completely unremarkable—like something you’d, well, buy at Jo-Ann’s —but upon closer inspection, each filament pulls apart into a complex woven web.

“They just burrow right down in there,” Westphal said, indicating the base where the filaments attach. This complexity gives the juvenile crab something to grab and burrow into, which is very important as they transition to benthic habitat.

Daly’s research has also revealed specific sources of predation on juvenile crabs in nearshore waters of Juneau, Alaska. In the summer of 2011, Daly and his colleagues tethered the tiny crabs, about the size of a pea, with fishing line and set them in the water with video cameras.

“We used the wimpiest fishing line we could find, and glued it to their carapace with a bead of superglue,” he said. So, what is eating these crabs right after they settle? Well, as it turns out, mostly hermit crabs, and then various groundfish, such as kelp greenling, rock sole, and arctic shanny. Daly is currently writing the scientific paper detailing his research results for this project. Although the juvenile crab were actually interacting with the natural environment, they were tethered and those that were not eaten could be pulled back in.

Actually releasing red king crab into the wild will not be happening anytime soon, although possible release sites have been considered. In 2009, NMFS identified Cozy Cove, near Old Harbor on Kodiak Island as suitable habitat site for releasing cultured juvenile red king crabs. Researchers were looking for an environment that would protect juvenile crab from predation, provide food for high growth rates, and would have the carrying capacity to support an infusion of juvenile red king crab. A dive study to examine substrate, cover and macrofauna, revealed the deeper parts of the cove to be muddy with little macrofauna, and the shallower parts to be a sloping mix of mud, rock, and shell with microfauna available. At the time no juvenile red king crab were seen.

Further research will focus on behavioral differences in such areas as foraging, competition for food, and the genetic impact of releasing large numbers of hatchery-raised crab into the wild. In the meantime, researchers will continue their studies on larval and juvenile crab and work with policymakers on the feasibility of restoring broodstock through hatchery cultivation.

As Pring-Ham states, “Our ultimate mission is not to harm the current wild population.”