By Riley Woodford and Amy Pinney 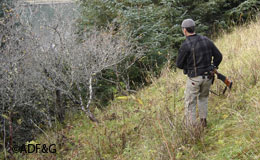 Americans enjoy unparalleled opportunities to hunt, fish and experience wildlife largely because of a far-sighted conservation effort launched 75 years ago. In many cases the very presence of animals on the landscape and fish in the water is tied directly to this effort, which has also helped instill a new appreciation for wildlife in generations of Americans.

Most people are aware of the virtual extermination of American bison in the 1800s, but unregulated commercial hunting and widespread habitat degradation also took an alarming toll on a variety of other animals. By the 1930s, white-tailed deer, wild turkey, beaver and many species of waterfowl were among the animals that were fast disappearing.

Concerned conservationists and politicians including Aldo Leopold and Teddy Roosevelt championed efforts to address the problem, and in 1937 Congress passed the Federal Aid in Wildlife Restoration Act. Commonly referred to as the Pittman-Robertson (PR) Act in honor of its sponsors, the law set up a framework whereby the users of wildlife resources help pay for their restoration and management.

Program funding comes from excise taxes, about 11 percent, paid by manufacturers on purchases of firearms, ammunitions, and archery equipment. The idea proved sound. Creating more and better hunting experiences for people led to more taxable items being purchased, which provided more funding for management and improvement. Since 1939 the Wildlife Restoration Fund has provided more than $12 billion in grants to state fish and wildlife agencies.

The U.S. Fish and Wildlife Service manages the distribution, and in Alaska, the federal funds come to the Alaska Department of Fish and Game. Each state receives a portion of this fund based on the size of the state and the number of licensed hunters. The fund provides a 75 percent reimbursement for projects to restore, conserve, manage, and enhance wildlife and their habitat, provide public use and access to wildlife resources, and provide for hunter education and development of shooting ranges. States contribute 25 percent, money that generally comes from hunting license sales. It is a user pay, user benefit program. 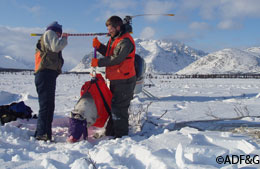 That money from hunters is vital to Alaska’s wildlife management program, said Kim Titus, Chief Wildlife Scientist for the Division of Wildlife Conservation. “Nearly all of the dollars are directed at field activities varying from estimating moose numbers to ensure sustainable populations and appropriate sex ratios to maximize hunting opportunity, to using state-of-the-art DNA methods to count grizzly bears, black bears, deer and other wildlife.”

Pittman-Robertson funding helps pay for wildlife management, which insures abundant hunting opportunities for Alaskans and visitors. Good habitat and an understanding of the wildlife populations pays off in sustainable harvests. About 8,000 moose were harvested in Alaska in 2010 as well as more than 22,000 caribou; about 1,500 brown bears; 2,300 black bears; 750 Dall sheep; and about 12,300 deer. The Division of Wildlife Conservation conducts 20 to 30 research projects on terrestrial game animals and furbearers each year, and more than a dozen survey and inventory species management projects.

In addition, the division annually delivers a wide variety of outreach products and efforts. Forums on wildlife, lectures, camps, brochures, newspaper articles, radio programs and web pages are designed to help Alaskans appreciate and understand the conservation of the state’s wildlife. Outdoor safety information, publications on hunting, and general wildlife topics are in high demand by hunters, educators, young people and the general public. DWC is helping to meet these demands, thanks in part to Pittman-Robertson funding. 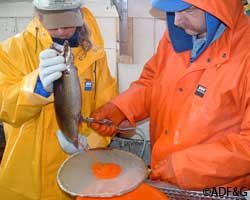 The Pittman-Robertson Act was so successful that a similar act was written for fish, titled the Federal Aid in Fish Restoration Act. It's best known by the names of its sponsors, as the Dingell-Johnson Act.

At least 75,000 students have participated in hunter education in Alaska since 1973, which has led to safer, better informed, and more prepared resource users and fewer hunting accidents and game violations. The funds help Fish and Game operate three shooting ranges statewide and provide archery education to more than 10,500 archers in more than 70 schools.

“Pittman-Robertson funding supports our program through the purchase of professional educational and training materials that provide for realistic field scenarios, hands-on firearms training, and the shooting proficiencies required for all courses. Funding is also important in our maintenance and expansion of quality shooting ranges, where families can safely practice and hone their shooting skills in preparation for next season’s hunts.”

The Pittman-Robertson Act was so successful that a similar act was written for fish in the 1950s, titled the Federal Aid in Fish Restoration Act. As with its wildlife counterpart, the common name is a nod to its sponsors. It’s known as the Dingell-Johnson Act.

Stacie Hall contributed to this article.