Small Game in Alaska Gets a New Focus 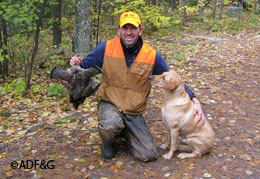 Rick Merizon is the new small game biologist for the Alaska Department of Fish and Game.

Rick Merizon grew up in Wisconsin hunting grouse and waterfowl. His appreciation and understanding of the natural history and the management of small game brings him to the Alaska Department of Fish and Game as the new small game biologist.

“This job is kind of a dream come true for me,” he said. “Small game is a keen personal interest for me, and the fact that this position is brand new is part of the appeal.”

Small game in Alaska includes grouse, ptarmigan and hares, animals appreciated by hunters and wildlife watchers. Merizon is a birder as well as a hunter and a biologist. He lives in Palmer with his family, but the small game biologist position serves the entire state. He’s been in Alaska 10 years. He earned his wildlife ecology undergraduate degree in Maine and his masters degree in Oregon at Portland State University, studying the distribution of seabirds in Puget Sound. He spent five years in Cordova and moved to Palmer in 2006.

Many people are introduced to hunting pursuing small game, and that is one part of Merizon’s job.

“There are a variety of aspects to this program: research, management, and education,” Merizon said. “A big one for me is developing small game hunting programs, especially for youth and new hunters - possibly programs for families, or along the lines of the Becoming an Outdoors Woman program.”

A brace of ptarmigan

Small game hunting is popular – it can be relatively simple, requiring minimal equipment and more casual outings than big game hunting. Merizon would like to get a sense for the effort that goes in to hunting small game in Alaska, and where and when that hunting occurs.

“Ideally I’d like to develop statewide hunter surveys for small game,” he said. That would likely start with surveys of road-system areas and expand to include more areas.

“I’d lean on broad group of volunteers, hunters who are passionate about helping,” he said. In addition to surveying effort, he’d like to look at abundance trends for grouse and ptarmigan. “Ideally I would like to enlist a broad group of volunteers to assist with fall harvested wing collections, observations, and even springtime abundance surveys.”

Research could also involve partnerships with collaborators outside Fish and Game. Merizon said he’d like research projects to tie directly to management concerns, providing information that will benefit long term management of grouse and ptarmigan populations. He’d like to better understand ptarmigan distribution and seasonal movements -why some populations are more sedentary than others, which migrate over larger geographic areas. 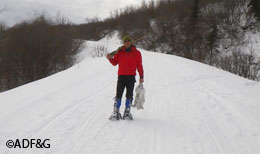 “I’m also interested in habitat questions, how grouse and ptarmigan use the habitat spatially and temporally as well as ways to work with landowners to address habitat issues.”

“We are very lucky in Alaska to have very diverse and abundant small game populations,” he said. “Whether you’re an avid birder or enjoy watching a grouse flush from the feet of your pointing dog, there are numerous opportunities to see and interact with small game anywhere in Alaska. I look very forward to working to conserve and promote these resources.”