A Day in the Life of an Alaska Brown Bear 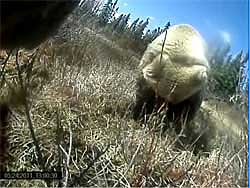 Boar 6041 approaches another bear. This still was captured from a 20-second video clip recorded by a collar mounted camera on the bear.

In the film “Being John Malkovich,” a mysterious portal allows people to pop into the head of actor John Malkovich and spend a few minutes seeing the world through his eyes.

In the video “A Bear’s Eye View: A Day in the Life of a Bear,” footage from a collar-mounted camera allows people to see the world from the neck of a 700-pound Alaska brown bear. Like the Spike Jonze film, the subject is unaware he’s hosting “passengers.” I’ve watched “A Day in the Life” seven or eight times and every time I notice some new, fascinating detail. I’ll highlight some of those details, and provide some insights into what is happening. Read this, then watch the video. The link is at the end of the article.

Wildlife biologist Chris Brockman assembled the 13-minute video from more than 100 separate 20-second snippets, all recorded on May 26 by one bear. The collar camera recorded a 20 second clip (with audio) every 15 minutes. A GPS location was also recorded, and researchers will be able to create a map that reflects the bear’s travels. This will offer further insights - in some cases the bear is revisiting sites where he’s found food, or left kills.

The bear is Boar 6041, a 10-year old male brown bear in the Copper River Basin of Southcentral Alaska. He’s part of a study called the Nelchina Brown Bear project. (Alaskans tend to use the terms brown bear and grizzly bear interchangeably). Alaska Department of Fish and Game researchers equipped this bear with a VHF radio collar in the spring of 2007, and he’s been located 66 times over the past years. He was equipped with the collar camera in mid-May, 2011, and it was retrieved about one month later.

State wildlife biologist Becky Schwanke is leading the Nelchina Brown Bear project, and she’s been keeping tabs on Boar 6041 since 2007. She said his home range is roughly 44 miles east to west and 33 miles north to south.

“He knows his home range in and out and he’s successful,” she said. “I suspect he has a circuit through his home range, and that’s what he does this time of year, the same pattern.” 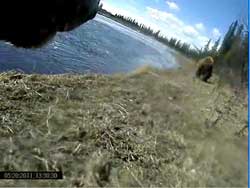 Boar 6041 follows another bear along the shore of a Southcentral Alaska lake.

The camera sits below his chin, and sometimes slides around on his neck giving a cock-eyed view. Usually, his chin is visible and often his mouth. A counter at the bottom left of the frame gives the date and time. It’s bear time, starting at midnight.

The day is May 26. It’s close to the summer solstice in Southcentral Alaska, nights are short and days are long. A beautiful, sunny day dawns clear, but we don’t see that at first because the bear is sleeping on the camera.

To reduce the video file to a manageable size and highlight activity, several edits were made. The bear is wakes up at 3:17 am, so that's where we begin his day.

3:32 a.m. he’s breeding with a female bear, and at 4:02 there’s a good view of her ear and head. Later in the day he’ll mate again with a different female.

4:47 is breakfast time. He’s eating a pile of fish by a lake, presumably winter-killed. Another short clip (also available for viewing as part of this collection) made a day earlier shows him eating from this same pile of fish, so it seems he found this resource earlier, ate some, and has returned.

5:02 he’s pawing at the water, perhaps pulling some submerged fish carcasses up to shore. He then goes back to eating the beached fish. He’s still eating fish at 5:17, but then lays down for a rest.

The collar camera was programmed to turn off for a set period each day to extend the total duration of camera life, and the camera goes off at 6 am and comes on again at noon.

The next clip is noon. He’s walking quickly, and it soon becomes apparent he’s following another bear. He’s still following the bear at 12:15, but in the next clip at 12:30 there’s no sign of the other bear.

The audio is slightly out of synch with the counter, we hear water gurgling at 12:30 but he’s not in the water until the next clip at 12:45. Those images are interesting - he’s not just drinking but seems to have his head underwater. He’s cruising again at 1 pm (13:00), and you see a few water drops on the lens. At 1:15 he stands up and looks skyward, the lens is dry. 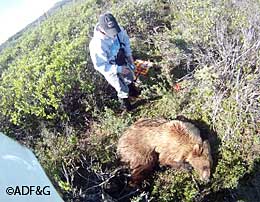 At 3:45 he’s breeding with a different sow, she has a red ear tag. She’s one of about 22 bears marked in the Nelchina Brown Bear Project, but she’s not a camera collared bear. (Other camera footage recorded a few weeks later in June indicates this boar killed and ate another of the study bears, a 6-year old female). He’s on the move again at 4:15, and stops to investigate a pile of bear scat.

At 5:15 pm he’s eating again, looks like an adult moose. This winter, as researchers are able to correlate GPS data with the collar camera images, they can determine if he’s returned to the earlier carcass or discovered another.

At 11:31 he’s bedded down, and the light is fading. At 11:45 something seems to be moving at the bottom right edge of the frame, it looks like he may be bedded down near another bear.

“Bear’s Eye View: A Day in the Life of a Bear” offers insights into this bear’s behavior in late spring. Behavior varies between bears, some are better hunters, others more omnivorous, and behavior also changes throughout the year.