The Story of Scavengers 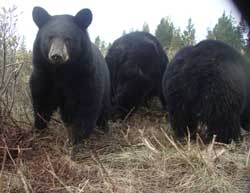 Three black bears captured by a remote trail camera on the Gustavus Forelands.

If you want to study scavengers, it makes sense to spy on dead things and see what eats them.

Diana Raper, a graduate student at Oregon State University, is in the second year of a three-year study of scavengers on the Gustavus Forelands. Motion-triggered trail cameras are proving to be the ideal tool for her research, and The Alaska Department of Fish and Game is collaborating and supplying cameras. Last year she used about 10 cameras to take about 6,000 pictures, this year she’s captured about 6,000 additional images, including black and brown bears, marten, ravens, eagles, and a coyote.

It’s interesting to compare last year to this year, she said.

A collection of about 12,000 pictures is an almost overwhelming amount of data to process, fortunately Raper has help from field assistants while she works in Gustavus, her base of operations. The small Southeast Alaska community is just outside Glacier Bay.

“I’m really fortunate to have great volunteers that come and help in the field as well as enter the data in the computer,” she said. “We do enter every picture, in Excel, and then it’s fairly easy to manage. We can sort by species, time of day, diurnal, nocturnal or crepuscular, to get a time of day when species are most active. We’re making a map of the study area showing the spatial distribution of different species at different carcasses, and I keep track of which scavenger species shows up at which carcass.” 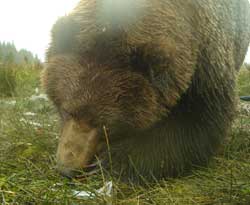 A brown bear on the Gustavus Forelands. Note the front claws, which are significantly longer than those of a black bear.

Local hunters have been immensely helpful, Raper said, providing carcasses and calling her when they field dress a harvested moose so she can set up a camera.

“I get to work very closely with the hunters here in Gustavus, and they bestow on me an enormous amount of knowledge they have on the animals and the land,” she said. “They share so much information, it’s really a great place to work. It has been a lot of fun to learn from them, and this would not be successful without their help.” Raper said she’ll go to the public library and meet people, and might have a several people gathered around looking at the pictures on her computer.

“It feels like a community project, people are excited to see the images and its fun to share the information with them,” she said.

“The snipe appeared to be foraging in the rumen,” she said. “The robin could have been foraging on insects around the moose carrion, but we weren’t able to tell.”

Fish and Game and the National Park Service are also studying wildlife in the Gustavus and Glacier Bay area, and collaborating with Raper and Kyle Pinjuv of Evergreen State College. Park Service biologist Tania Lewis and Pinjuv (who has worked in Glacier Bay the past two summers as a bear technician) have been using hair snares to collect DNA from a number of bears in the area, and that will help identify individual bears and determine a population estimate of black and brown bears in the park and Gustavus Forelands. 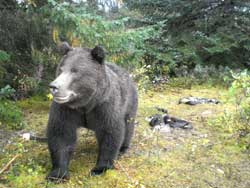 Once individual black bears are identified, Raper plans to look at the diets of specific bears. There are several components to Raper’s work. In addition to using cameras to document the scavengers on carcasses, she’s looking at the food habits of wolves and black bears during the spring moose calving season. She also using stable isotope analysis to look at the diet of wolves and bears.

Stable isotope analysis can indicate the origins of the food sources; revealing if the animal was consuming meat from a terrestrial or a marine source, and what proportion of the diet is meat versus vegetation.

“We have done a the first round of scat analysis, Kyle is coordinating that - the stable isotope analysis will tell proportionally what that animal is eating,” she said. “We could parse out the percent of moose vs. salmon vs. other species in the diet.”

Raper will be back next year, and Pinjuv, Lewis and Fish and Game biologists will continue building an understanding of predators and scavengers in this part of Northern Southeast Alaska.

“Another year’s worth of data will be really interesting,” she said. “A third year will be really helpful, especially considering the change from last year with bear and wolf activity.”

Riley Woodford is a writer and producer with the Division of Wildlife Conservation, and a trail camera "trapper."