Woodpeckers: Drumming up a Mate 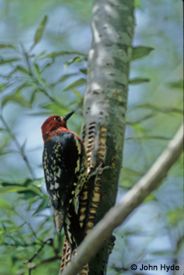 Marie Kirkman feels like she’s witnessing an invasion of woodpeckers this spring. She likes the striking, red-headed birds, but said the noise can be annoying – especially early in the morning.

“It sounds like they’re pounding on metal,” she said.

They are. Kirkman, a student living on campus at the University of Alaska Southeast near Juneau, is witnessing the woodpecker variation of the songbird’s spring courtship ritual. Many birds sing to advertise their presence and attract a mate. Woodpeckers drum, rapidly pecking their bills against resonant objects to announce their availability to prospective mates.

In the forest they seek out dead trees and hollow logs. Around human habitations, they will target signs, rain gutters and even trashcans to project their message.

Different species of woodpeckers have distinctive drumming patterns. The woodpeckers Kirkman sees around Auke Lake - red-breasted sapsuckers - drum with an irregular pattern that stops and starts, speeds up and slows down. Another Southeast species, hairy woodpeckers, have a fast drum-roll pattern that doesn’t speed up or slow down. Downy woodpeckers have a slow drum, almost slow enough to count the taps, and they drum for a few seconds, pause for a few seconds, and then repeat. 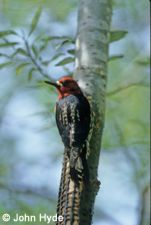 Michelle Kissling, a wildlife biologist with the U.S. Fish and Wildlife Service, is studying woodpeckers in the Juneau and Petersburg areas. Kissling said woodpeckers drill and peck for three reasons: to excavate nest cavities, when they are foraging for food, and when they are drumming.

“Drumming is seasonal, and it’s their primary means of communication,” she said. “Unlike most songbirds, where just the male sings, the female woodpeckers also drum – they’re trying to attract a mate as well.”

Woodpeckers do have a variety of calls (they make sounds like “Peek, peek” and “Kee-yew”) but their vocalizations are not used for mate attraction.

Kissling’s project focuses on hairy woodpeckers. She’s studying nesting chronology - their “schedule” for pairing up and mating, excavating a nest cavity, laying eggs, and raising and fledging their young. Biologists locate the woodpeckers by listening for the drumming – the mating call. Once the woodpeckers have paired up, many species stop drumming and consequently, they can be come difficult to locate. Kissling hopes to learn when the birds are most actively drumming.

“I want to find out when you are most likely to detect the birds,” she said.