By Tom Vania and Matt Miller 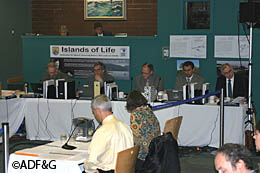 The Board of Fisheries Meeting

Every three years the Board of Fisheries meets to consider proposed changes to fisheries regulations for Cook Inlet and Kodiak. Proposals to change regulations are submitted by the general public, fishing organizations, local fish and game advisory committees, and the Alaska Department of Fish and Game. Three meetings were held over the winter to address proposals to change sport, commercial, subsistence, and personal use fishing regulations in Lower Cook Inlet, Kodiak, and Upper Cook Inlet. The Lower Cook Inlet meeting was held in Homer where the Board of Fisheries considered 51 proposals over a four day period. Kodiak was the meeting location during another four days to consider 31 proposals, and Anchorage hosted the largest meeting lasting 14 days to deliberate on 211 proposals.

At the Lower Cook Inlet meeting, 32 of the 51 proposals were asking for changes to sport fishing regulations. Most of the proposals focused on king salmon sport fishing in the Anchor River and Deep Creek and requested the board reduce the king salmon harvest potential through changes to the season dates, annual harvest limits, methods and means, and closed water areas. Other proposals sought regulatory changes for coho salmon, steelhead trout and the winter king salmon fishery.

In the end, the Board decided to revert back to some regulations that were in place prior to the last Lower Cook Inlet meeting in 2008. The annual limit for Anchor River king salmon was reduced from five per year to two per year from the Anchor River and Deep Creek combined. The closed salt water areas at the Anchor River mouth were doubled in size from one mile north and south from the river to two miles north and south from the river. Steelhead trout in Anchor River, Deep Creek, Ninilchik River, and Stariski Creek all received additional protection by closing the rivers to all fishing from Nov. 1 until the spring salmon seasons begin. Sport fishing anglers did see some additional opportunity come their way during the winter king fishery by an increase in fishing area. The northern boundary, formally at Bluff Point, was moved north to the Anchor Point Light.

Creation of a Karluk River King Salmon Action Plan was a major topic of discussion at the Kodiak meeting in January. The board adopted several regulatory changes consistent with the Sustainable Salmon Fisheries Policy to protect Karluk River king salmon. Because the sport fishery has been restricted or closed by emergency order beginning in 2001, including preseason restrictions 2007-2010, the board focused actions on commercial seine and trawl fisheries, and identified potential restrictions to the subsistence fisheries.

For fisheries along the Kodiak road system, the Board closed Kalsin Pond outlet stream to sport fishing, and opened the American and Olds rivers to fishing for king salmon. Additionally, the board reduced the rockfish bag limit from 10 per day, 20 in possession to five per day, 10 in possession, only two of which may be non-pelagic, and only one can be yelloweye.

Typically the largest meeting that occurs during the annual Board cycle is the Upper Cook Inlet meeting and this year’s meeting lived up to its billing. 130 proposals were submitted to address sport and personal use fishing regulations. This was down from 150 proposals submitted during the last time the Board met for the Cook Inlet area in 2008. This year’s meeting saw an increase in proposals related to the popular personal use dip net fishery on the Kenai and Kasilof Rivers, the Kenai River king salmon size slot-limit, and coho salmon bag limits. The Board also had to address stock of concern designations for king salmon stocks in the Chuitna, Theodore, and Lewis rivers in the West Cook Inlet Area, and Alexander, Goose, and Willow creeks in the Susitna River area.

An increased number of participants and harvest of sockeye salmon in the personal use fisheries over the last several years generated quite a bit of discussion during the meeting. Nearly 400,000 salmon were harvested by Alaska residents in the Kenai River dipnet fishery last July. After listening to hours of public testimony, the Board either voted down or took no action on dozens of proposals including reducing the household limit to 10 fish per season in the Cook Inlet personal-use salmon fisheries, and requiring dipnetters to take a class and obtain an education card before receiving a dipnet permit.

No action was taken to change the king salmon slot limit on the Kenai River, or the coho salmon bag limits in highly accessible areas. The coho salmon bag limit was increased from two per day to three per day in the more remote locations of West Cook Inlet and the Susitna River only accessible by boat or plane. The board also took action to help decrease mortality associated with catch and release of coho salmon by prohibiting anglers from removing coho salmon from the water before releasing the fish.

Other actions to help increase king salmon production were regulations to increase the harvest of northern pike which are threatening the sustainability of salmon and resident species in a number of Susitna River streams. The board took unprecedented action by prohibiting the release of northern pike back into the water alive and allowed anglers to discard dead pike in a responsible manner rather than harvesting their catch.

In the Anchorage area, the Board created spawning closures in Ship, Campbell, and Chester creeks from April 15- June 14 to protect wild rainbow trout. The season and area closures for the coho salmon fishery on Campbell Creek were simplified to avoid multiple seasons along the creek. Bird Creek was closed to all fishing Jan. 1- July 13 in order to protect the small run of king salmon. The closure should not impact angler’s opportunity to enjoy the popular Bird Creek coho and pink salmon fisheries. Symphony Lake has not been stocked by the department since 2003 and supports a healthy population of arctic grayling. Symphony Lake was removed from the stocked lakes section and the bag limit for grayling was set at five per day, five in possession, only one per day may be greater than 12 inches in length.

All of these regulation changes can be found in the annual Alaska Sport Fishing Regulation Summary booklets and online on the Department’s website at www.adfg.alaska.gov.