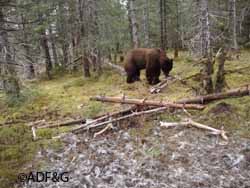 A larger version of this picture, as well as others taken by the same trail camera, can be viewed on the ADF&G trail camera gallery. See the link at the bottom of the article.

Pictures of hungry brown bears, curious marten and playful coyote puppies are just a few mouse clicks away on the Fish and Game website.

Dozens of candid wildlife images are featured in the department’s new trail camera gallery on the ADF&G Wildlife Viewing website. The images were all taken by remote, motion-triggered cameras. Many of the images have been contributed by scientists, others by members of the public.

“This seems like a natural for the wildlife viewing site,” said Anne Sutton, wildlife viewing program coordinator. “We so rarely see animals like we can in these candid camera shots. There’s something so raw about them that’s really appealing. Wildlife photography is very beautiful, but these are just the elemental scene….just knowing there’s nobody there but the camera.”

Images have also been provided by biologist Tania Lewis of the National Park Service and graduate student Diana Raper of Oregon State University. They set up a motion triggered camera last summer on a whale carcass in Glacier Bay. Raper is also working with Fish and Game on a study of scavengers on the Gustavus Forelands. Wildlife technician Jeff Jemison provided some of the images from that study, and others images from elsewhere on the Gustavus Forelands. 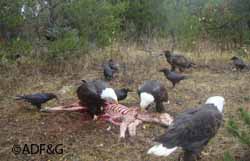 Bill Stannard, a Fish and Wildlife News reader, graciously provided a set of pictures taken from a trail camera posted on his cabin in the Talkeetna Mountains.

New images will be posted as they are made available. Fish and Game invites the public to submit images for display. The gallery offers a way to share images, and photographers retain all rights to their pictures. Send images and information to Riley Woodford at riley.woodford@alaska.gov. For questions, e-mail or call 907-465-4256.

The gallery can be viewed at: http://www.adfg.alaska.gov/index.cfm?adfg=viewing.trailcams