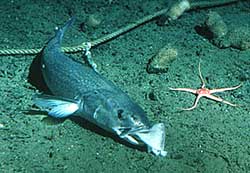 A black cod, or sablefish, caught on a longline. NOAA photo.

Sablefish wanderings are the focus of a new tagging study in Prince William Sound.

More than 1,200 sablefish in Prince William Sound are adorned with bright red tags as part of a three-year study aimed at learning if the fish are homebodies, or where they roam.

"How far do sablefish that are tagged in Prince William Sound go,” asked Ken Goldman, the tag team leader at the Fish and Game office in Homer. “From data from four to 14 years ago we had 400 or so tagged fish and from those tag returns, they seem to range all the way out the Aleutians, down in Southeast and even into Canadian waters."

"So the question is, how well mixed is that group of fish in Prince William Sound,” he said. “If they are very well mixed with the whole Gulf population then the National Marine Fisheries Service (NMFS) does an extraordinarily detailed survey, lots of stations are out in the Gulf and they assess sablefish as part of that. So if the stock assessment in Prince William Sound is well mixed, we already have a big assessment going on and we can rely on that."

If sablefish mostly stick around and don't range into the Gulf, Goldman says the state may have to plan more studies of its own. That could end up boosting catch limits that have been stuck in low for years.

"We can run a model where we can look at the tag return rate along with the age structure of the population and for the first time actually start to set harvest limits based off data from Prince William Sound,” he said. “Right now it's been a 240,000 pound harvest limits for a number of years That does not change regardless of any assessments by the federal government or anyone else."

Sablefish, or black cod, is the priciest fish of them all for Alaska fishermen, averaging nearly $6/lb last year. Goldman is counting on commercial and sport fishermen to help with the project by returning the tags from any sablefish they hook, along with catch information, to Fish and Game offices. It will get you a snazzy new cap -

"It is Poseidon or Neptune but without his three pronged trident - he's got a tagging pole instead, he's tagging some combination of rockfish, sablefish and other fish," Goldman said. 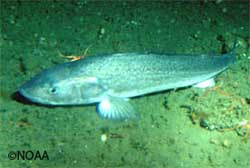 Goldman says fishermen and anglers are very supportive of the tagging project.

"They are interested in their resource they care about it they want to see it sustained as do we. So their help is instrumental to our success in this case."

Learn more about sablefish at ComFish in Mid-April - www.comfishalaska.com

Find Alaska's faces/boats and fishing grounds on Facebook at www.asmifacebook.com

Laine Welch has been covering news of Alaska’s seafood industry since 1988. Her daily Fish radio program airs on 30 AK stations; her weekly Fish Factor column appears in more than 20 papers and websites.

This article by Laine Welch first aired April 6, 2011, as part of “Fish Radio with Laine Welch,” and was reprinted in SEAFOOD.COM NEWS. (Thanks to the assist from KBBI/Homer.) It is reprinted with permission.

• Sablefish populations are near or above target levels and are harvested at sustainable rates.
• The Alaskan sablefish fishery is managed using individual fishing quotas – managers set a quota for how much sablefish can be caught, and shares of this overall quota are allotted to individual fishermen to harvest. This type of management seeks to provide some ownership of the resource to Alaskan communities. It has increased catch rates and efficiency, saving fishermen money. It has also decreased the harvest of immature fish, improving the chance that they will be able to reproduce at least once before they harvested which is good for the health of the sablefish resource.
• Sablefish is very high in healthy long-chain omega 3 fatty acids, EPA and DHA. It contains approximately as much EPA and DHA as wild salmon. For more information, see Nutrition Facts. (USDA)
• Most of the total world catch of sablefish comes from Alaska. Oregon, Washington, and California generally account for less than one-third of the U.S. harvest. Outside of the United States, sablefish are caught along the British Columbia coast, from the Vancouver area north to the Alaskan border. 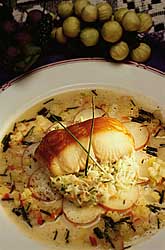 Sablefish, or black cod, is the priciest fish of them all for Alaska fishermen, averaging nearly $6/lb last year. NOAA photo

Life history, including information on the habitat, growth, feeding, and reproduction of a species, is important because it affects how a fishery is managed. Scientists have limited knowledge about the juvenile biology and post-larval stage of sablefish. This complicates their ability to assess the extent to which sablefish stocks may exchange genetic material. Continued research is necessary to improve management of sablefish.
• Geographic range: The northeastern Pacific Ocean from northern Mexico to the Gulf of Alaska, westward to the Aleutian Islands and into the Bering Sea; highest concentrations in Alaska
• Habitat: Sablefish are found in waters 656 feet or deeper and have been found as deep as 9,800 feet. Juveniles live in surface and near-shore waters; adults live on mud bottoms.
• Life span: Long – estimated to live longer than 90 years. Maximum age reported is 94 years.
• Food: Small sablefish eat zooplankton (tiny floating animals) in their first weeks of life. Sablefish eat other fish, crustaceans, and worms as they grow older.
• Growth rate: Rapid
• Maximum size: 4 feet
• Reaches reproductive maturity: Females mature at 2.1 feet and 6.5 years of age; males mature at 1.9 feet and 5 years of age.
• Reproduction: Eggs develop in deep water for about 2 weeks until they hatch. The hatched larvae swim to the surface after they begin feeding. In southeast Alaska and British Columbia, juveniles appear in nearshore waters by fall.
• Spawning season: March through April in Alaska; January through March between California and British Columbia
• Spawning grounds: Usually in deeper water (984 to 2,300 feet) along the continental slope; specific depth depends on location
• Migrations: Sablefish are highly mobile for part of their life; some juveniles have been found to migrate over 2,000 miles in 6 or 7 years.
• Predators: Other fish, seabirds, sharks, and whales
• Commercial or recreational interest: Commercial
• Distinguishing characteristics: Roundfish that looks like cod