Anadromous Waters Atlas and Catalog
Where The Salmon Are 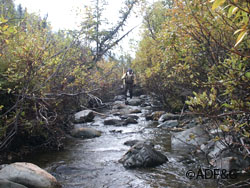 Due to regulatory changes in 2008, current Alaska Statute (AS 16.05.871) now requires that the ADF&G "specify the various rivers, lakes and streams or parts of them" of the state that are important to the spawning, rearing or migration of anadromous fishes. The Catalog and Atlas are the media still used to accomplish this specification and are presently adopted as regulation under 05 AAC 95.011. The Division of Sport Fish is responsible for information maintained in the ADF&G AWC which is utilized to create the Anadromous Waters Atlas maps and Catalog, while the Division of Habitat is now responsible for initiation of the regulatory process for adoption of maps depicting anadromous streams and catalogs describing stream locations into state regulation. 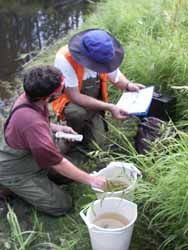 Water bodies listed in the AWC are important because they specify which streams, rivers, and lakes are important to anadromous fish species and therefore afforded protection under AS 16.05.871. Water bodies that are not "specified" within the Catalog and Atlas are not afforded that protection. To be protected under AS 16.05.871, water bodies must be documented as supporting some life function of an anadromous fish species (salmon, trout, char, whitefish, lamprey, smelt, and sturgeon). Anadromous fish must have been seen or collected and identified by a qualified observer. Most nominations come from ADF&G fishery or habitat biologists. Others are received from individuals, natural resource companies, and biologists from other state and federal agencies

Nominations should provide adequate information to substantiate the addition or deletion of species or water body, extension of existing habitat, revisions to stream hydrography, correcting annotation errors, or the addition of barriers to the water body. The AWC Project Biologist prepares annotation instructions, which are then reviewed by ADF&G staff prior to inclusion in the AWC and creation of Atlas maps. Once revised maps are drafted and have undergone department, public, and regulatory review they are adopted into regulation. 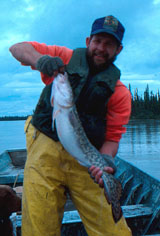 Presently Atlas maps and Catalog data are available in hard copy form, pdf files, or as shape files that can be imported into mapping software such as ARCMAP. Previously Atlas maps were hand drawn onto mylar sheets, the mylars were then overlaid onto USGS map mylars and blue-line maps were then printed from these composites. Beginning in 1996, the department began transferring hydrography and species data from hard copy to electronic form. One advantage of this work has been the ability to make map data available on-line through an Internet Arc Server website. This allows the user to overlay and view data using topographical or satellite imagery. AWC data can also be viewed in conjunction with resident fish or culvert location data. Another advantage is that data are more easily accessible, which facilitates data requests. Regulatory update of the Atlas and Catalog are scheduled to occur once a year. Additional information, downloadable copies of nomination forms, and a link to the Arc Server website can be found at: http://www.sf.adfg.state.ak.us/SARR/awc/
The Catalog and Atlas, respectively currently contain over 17,000 streams, rivers or lakes around the state. Based upon thorough surveys of a few drainages it is believed that this number represents less than 50% of the streams, rivers and lakes actually used by anadromous species in Alaska.

J. Johnson is Project Biologist for the Anadromous Waters Program.