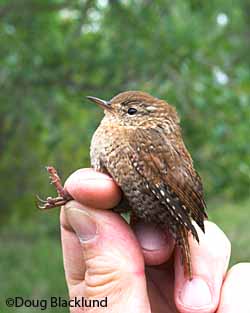 The remarkable song of the winter wren is a blizzard of burbling notes, drawing attention to this tiny, otherwise easily overlooked forest bird. It’s appropriately named, as the winter wren can be found year-round in coastal Alaska. But Alaska’s winter wren is no more.

This name-changing is a mixed bag. It’s done by the American Ornithologists’ Union (AOU), one of the oldest and largest organizations in the world devoted to the scientific study of birds. In some cases, new names are more descriptive. Sometimes, more politically correct.

Susan Sharbaugh of the Alaska Bird Observatory in Fairbanks said often a name change reflects a better understanding of a species or a subspecies. Biologists are famed for their tendency to “lump or split” species, and this is generally a well-intentioned attempt to be more accurate. That’s the case with the winter wren. 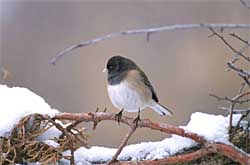 Beth Peluso of Audubon Alaska pointed out another recent name change based on genetic fine-tuning. Blue grouse, popularly known in Southeast Alaska as hooters, have been split by the AOU into sooty grouse and dusky grouse – these former subspecies groups are now full species. Dusky grouse are found in the western U.S. and Canada, while sooty grouse are found on the coast of Southeast Alaska.

This is not the first time this has happened. The blue grouse has gone through previous lumping and splitting events as biologists looked at characteristics of different populations in different regions. The blue grouse was split into two species in the 1930s, then merged again in the 1940s. Recent analysis of mitochondrial DNA indicated that species-level status was warranted for dusky and sooty grouse.

The birds are similar, but they do look different, as the names imply. Dusky grouse are paler than sooty grouse. The chicks also look different. The males’ mating calls are different in the number and frequency of notes: dusky males call with five hoots or notes of lower frequency than sooty grouses’ louder, higher pitched six-note call. And as hooter hunters are well aware, sooty grouse tend to call from the trees while dusky grouse call from the ground. 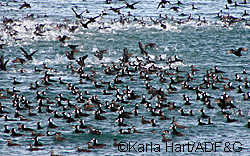 The junco falls into the lumping category. This common sparrow of the west, and a beloved winter feeder bird in Alaska, was once known by five names. All are now lumped together as dark-eyed junco. The variants are considered to be geographic races, not separate species.

Sometimes the scientific name, not the common name, is changed. The well-known belted kingfisher, Ceryle alcyon, is now Megaceryle alcyon. This bird is named after a mythological Greek princess demigod who the gods turned into a kingfisher. It’s a pretty poetic scientific name, but now it’s mega – bigger.

In the political correctness category, we have the oldsquaw, now known as the long-tailed duck. Although the former common name and the scientific name, clangula, refer to this gregarious seaducks’ tendency to flock and chatter – long-tailed is also descriptive and less potentially offensive.

Not all name changes stick. An effort was made recently to change the name of the black scoter, a sea duck common in coastal Alaska, to American scoter. The AOU followed up its 2010 checklist update with a correction that the name change was an error and should remain black scoter.

Riley Woodford is a writer and producer with the Division of Wildlife Conservation. He’s had mixed feelings about the AOU ever since the marsh hawk was renamed the northern harrier.