Generally, when searching for something and then finding it, one feels a sense of mild success. “Eureka! I found the keys.” “Aha, the long lost mate to my favorite pair of socks.” When it comes to invasive species (organisms that harm economies, environments or humans) we look for them with fingers crossed that we won’t find anything. Last summer while scoping for marine invasive species we found the invasive colonial tunicate, Didemnum vexillum. There were no celebratory high fives, fist pumps or shouts of “Yessss!” Instead, the news was met with groans of disappointment. Many are concerned for how this invasive species may affect important fisheries, their habitats, and species diversity.

If at this point you’re wondering what a tunicate is; to learn more you can jump to an article in the April 2010, edition of this online magazine: http://www.adfg.alaska.gov/index.cfm?adfg=wildlifenews.view_article&articles_id=455&issue_id=85

As the Project Leader of the Alaska Department of Fish and Game’s (ADF&G) Invasive Species Program, I joined a group of professional biologists, students and volunteers for the inaugural Marine Invasive Species BioBlitz in Sitka, Alaska in June 2010. Although we had several objectives for the event, the primary goal was to search for seven invasive species within four types of habitats at ten various sites. We were aware that two of the species on our list had previously been detected in Sitka.

We identified seven marine invasive species which had been introduced to coastal environments on the west coast of the U.S. that could likely survive in Alaska waters. At each site we looked on the underside of docks, on buoys, lines, and hoses hanging in the water, on boat hulls, and rocky shorelines or on aquatic farm gear for any sign of the target species. Two types of Botryllid tunicates had been detected in Sitka in 2007, and have since been monitored by local biologists. We were curious to learn whether the distribution of these introduced tunicates had changed since 2007. In addition to the already present Botryllid tunicates, which are commonly referred to as 1) golden star tunicates and 2) violet tunicates, the other species hunted for include 3) Pacific transparent sea squirts, 4) common solitary sea squirts, 5) European green crabs, 6) the colonial tunicate, Didemnum vexillum (some call it marine vomit), and 7) Wakame seaweed.

We considered the BioBlitz successful because volunteers came out to help, we collected data on the change in distribution of the Botryllid populations, and four of the five species not known to exist in Alaska were not found. The BioBlitz was also a success because we discovered Didemnum vexillum in Whiting Harbor, but success is not so sweet when the invasive species sought are actually found, especially this highly invasive colonial tunicate. A bright spot is that we think we may have found this species early, so feasibility of control is being investigated.

Colonial tunicates, known also as sea squirts, frequently do well when introduced into new marine environments. They possess several traits that enhance successful invasion including the ability to grow and reproduce quickly, to smother other organisms, and to tolerate a wide range of environmental conditions. When these species are introduced to areas outside their native range, they often become invasive. Didemnum vexillum fits the invasive species description to a T.

Such traits have allowed Didemnum vexillum to thrive when introduced globally. It has been detected at sites in Europe, New Zealand, British Columbia, Canada, and both the east and west coasts of the U.S., among others. This invasive colonial tunicate has the ability to grow on many natural and artificial structures. It can completely encrust mussels, oysters and other bottom-dwelling organisms.

“It has the ability to reproduce sexually and by fragmentation, leading to potentially rapid clonal replication of successful, invasive genotypes,” said Dr. Sarah Cohen, Assistant Professor of Biology at San Francisco State University. You can see why this tunicate is a problem. Add to the above features the fact that very few predators are interested in eating this sea squirt and you can see why it was a bitter pill to swallow when Dr. Cohen confirmed, by molecular analysis, that we had indeed found Didemnum vexillum during the BioBlitz.

When growing on the seafloor, Didemnum vexillum grows in low undulating mats; if growing from suspended substrates or in areas with limited wave action it grows long, pendulous lobes or tendrils that look like dripping wax. It can vary in color from cream, beige, pink, and yellow to orange. It has visible veins and pores. One might confuse a colonial tunicate with a sea sponge animal by appearance, but it doesn’t feel like a sponge. Tunicates feel slippery and somewhat rubbery or leathery.

The extensive mats may cover large areas of the ocean floor, encasing rocks, seaweed, and other living organisms like hydroids, sea anemones, and other animals. In fact, ADF&G divers found three decorator crabs with Didemnum vexillum growing on their carapace (shell). One fear is that native species important to commercial, subsistence, and recreational fisherman will not have access to prey that live on the seafloor because it is beneath the invasive tunicate. Another concern is that eggs, which under normal conditions are deposited on seaweed or in the gravel of the seafloor, will instead end up on the invasive tunicate where they may not survive or their development may be impeded.

Biologists from several local, state, federal, and nongovernmental agencies and universities, along with the Smithsonian Environmental Research Center, are working with ADF&G to assess the distribution of this species in the Sitka area. A dive survey will be completed by ADF&G divers in January. In February, National Marine Fisheries Service will do surveys with a camera attached to a Remote Operated Vehicle in areas too deep to dive. By learning about the distribution of the invasive tunicate we can evaluate the feasibility of eradicating it from Alaska. We’re asking the public to get involved, too. 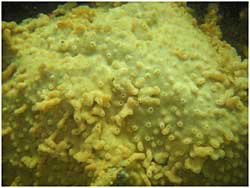 You can help in a number of ways; first, by being aware of and preventing the spread of invasive species. Avoid entering Whiting Harbor until more is known about where the Didemnum vexillum is located to prevent spreading it to new areas. When dropping an anchor, net, or crab pot in an area that is infested you could unintentionally bring up some of the tunicate and unintentionally move it to a new location. If entering the embayment cannot be helped, then it is strongly suggested to avoid the head of the bay. If accessing the causeway can’t be avoided, one may consider accessing it at a location as near to the entrance of Whiting Harbor as possible.

Check your boots and gear! Don’t accidentally bring anything away from Whiting Harbor. It is a best practice to rinse gear used at the causeway or within Whiting Harbor with fresh water at a location away from the marine environment. Letting gear dry thoroughly will also kill the invader.

Next, if you hear of or see an organism that you think is the invasive tunicate Didemnum vexillum, please contact the ADF&G, Invasive Species HOTLINE at 1- 877-INVASIV (1-877-468-2748). Take a picture of the suspected organism and get a GPS point of where you found it. Please do not to pull up organisms because there are a number of native species that look similar to the invasive tunicate. Snapping a picture could provide enough information to let us know that you’ve found something that requires a second look.

If you are a boat owner, check the hull of your boat. Fouled hulls of recreational and commercial boats are a primary mechanism for moving invasive species. If your boat hasn’t moved from its slip in a while, check it out from above; better yet, find someone in your community who dives and ask them to check it out. If you’ve got life forms growing on your hull, you could be supporting a colony of invasive tunicates. Boat hulls should be cleaned away from the marine environment so as not to cause fragmentation and spread. If you suspect you’re harboring invasive species on your hull, but can’t clean it away from salt water, first call the hotline; then, manually remove the invasive species and place them in a plastic bag and dispose of it in the landfill.

Invasive species can significantly change the diversity our marine ecosystems, and thereby put our fishing lifestyle at risk. Let’s work together to prevent the spread of invasive species to our oceans and nearshore ecosystems. It is so much sweeter to pull a big king salmon or a barn door halibut from the sea than to find an invasive species that may alter the environments that sustain those prized fish.