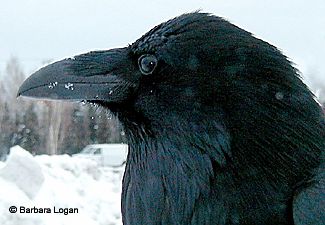 "Free as a bird! I want to be free as a bird!" How often I've heard this expression when someone was fed up with the demands of job and family. Early this summer I studied nesting ravens in the Nome area for the Alaska Department of Fish and Game. And guess what? Birds are definitely not free! They are as bound by biological demands and limitations as much as we are bound by our laws and rules.

In late April, May and early June the ravens' time was entirely taken up with the demands of nesting, feeding and fledging their young. I enjoyed observing how dramatically ravens' behavior changed - during winter we see them strutting about like groups of black leather jacketed hoodlums, but during nesting season they transform into doting parents.

I watched eight pairs of ravens and each pair protected its nest with fierce care. They appeared to be on guard 24/7. Two nests were on abandoned buildings and six of the nests were in the high ironwork towers of Nome's abandoned gold dredges.

Typically one raven sat on the nest while the other perched nearby. Once I approached a nest unobserved. As I unlimbered my binoculars and settled in, a gull appeared. In the next moment I was crouched under powerfully beating wings as a raven flew directly over my head at the oncoming gull. The gull wisely turned away.

The ravens' dedication included a feeding program for the parent sitting on the nest. Several times I observed one raven deliver food to its mate, landing on a small hilltop near the nest to regurgitate food. The nesting bird would then fly down to feed while the first bird took its place on the nest.

Once the eggs hatched, the parents fed the hatchings with remarkable care. One nest had two hatchlings; the rest had three or more young to feed. The adult would land at the edge of the nest, turning its head from side to side to observe its clamoring young. The adult's lethal-looking black beak would very gently place a piece of food in each upturned mouth. This action was performed slowly and with apparent great care.

I made my rounds of the nests three times a week, observing for three or four hours each day. I spent at least 15 minutes at each nest, devoting more time depending on the raven's behavior. On one windy and rainy day I observed an adult raven perch on the edge of a particularly exposed nest. The parent spread its wings in what appeared to be an attempt to shield the young ravens from the blustery wet weather.

Even after the young birds fledged it appeared that some families remained together near their nest site.

Writer Bernd Heinrich, author of "The Mind of the Raven," contends that ravens have some level of self awareness and thus consciousness. After several months witnessing first-hand the devotion with which ravens undertake the raising of the next generation, it's easy to agree.