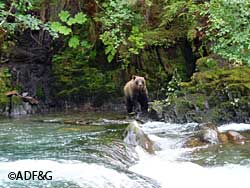 Bear experts urge people to use caution and common sense to avoid bear encounters, and if needed, to use bear spray as a non-lethal deterrent or firearms as a lethal deterrent. Neil Barten Photo.

(A Taser is an electroshock weapon that uses electrical current to disrupt voluntary control of muscles. It uses a compressed gas charge - like some paintball guns, it is not a firearm - to fire two dart-like electrodes which stay connected to the unit by wires. Taser is a registered trademark of its manufacturer, Taser International.)

Bear experts instead urge people to use caution and common sense to avoid bear encounters, and if needed, to use bear spray as a non-lethal deterrent or firearms as a lethal deterrent. Specifically, here are their reasons:

1) Wasp spray requires careful aim and is not designed to incapacitate large animals: Wasp spray disperses in a direct stream, which would necessitate a direct hit by the user, likely to the bear’s eyes or face. Bear spray, on the other hand, disperses in a wide fog, which means that the person spraying it does not need to have accurate aim for it to still be effective. While no deterrent is 100 percent effective in all situations, research and actual use has proven that bear spray can be an effective deterrent against advancing bears. Wasp spray, while cheaper, is not designed for use on large animals and has not been proven effective as a wildlife deterrent.

2) Wasp spray is a poison: Approved bear spray contains capsaicin, a chemical derived from cayenne peppers that temporarily disables bears, or people, without typically causing permanent harm. In contrast, wasp spray is a poison that could be harmful to both people and bears. The active ingredient in most wasp sprays are pyrethrins, natural organic compounds designed to penetrate the nervous system of insects and kill them. Even though some self-defense experts have recommended the use of wasp spray instead of mace against people, safety concerns are significant enough that some states have specifically outlawed the use of any self-defense sprays other than pepper sprays (those containing capsaicin.

3) Tasers need more research before they can be considered effective: While ADF&G research and management biologists have conducted research on Taser use on wildlife in field trials and have been using them under limited circumstances on bears and moose as a management tool, they are NOT a proven deterrent method and are not recommended for use by the general public. Tasers were devised for use on humans to force compliance and enable further restraint. While research results are so far promising, not enough is understood about how a tazed bear or moose might react. It likely would run off, say some biologists, but it could turn aggressive. Until more research is done, biologists strongly advise against Taser use on wildlife. Further, regulations on the use of Tasers for wildlife may be changing in the near future. Contact Larry Lewis at ADFG (907-260-2931) for current regulations on the use of Tasers. 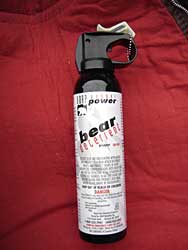 Approved bear spray contains capsaicin, a chemical derived from cayenne peppers that temporarily disables bears, or people, without typically causing permanent harm. In contrast, wasp spray is a poison that would likely be harmful to both people and bears.

4) Firearms and bear spray are proven deterrents: However, as with any weapon or tool, people must understand how to use these deterrents and be prepared and proficient in their use.

ADF&G biologists Sean Farley, Larry Lewis, Dick Shideler and Jeff Selinger contributed to this response. More information about the use of wasp spray as an alternative to pepper spray was found on Snopes.com.