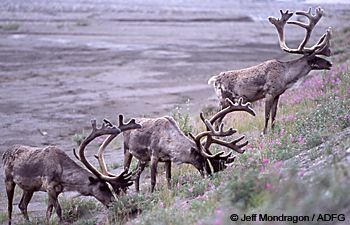 When wild caribou such as these encounter domesticated caribou (reindeer) sometimes the domestic animals join the wild herd.

"Our ancestors always told us that one day the caribou is gonna come back again. I think that's becoming true."

Researchers, rural subsistence hunters, reindeer herders, urban hunters, conservationists and others are keeping an eye on the Western Arctic Caribou Herd. Through the use of radio and satellite collars, ADF&G biologists have counted more than 400,000 animals in the late 1990s.

The herd has also begun to range farther west onto the Seward Peninsula during the fall and winter months before making their annual trek north to their spring calving grounds on the North Slope. As they trod their ever-increasing rounds they have swept whole herds of domestic reindeer along with them, wiping out many second and third generation Inupiat reindeer herders.

So what is going on with the caribou?

Researchers have studied the Western Arctic caribou herd for decades, but for a fuller understanding of the history some are turning to old-time reindeer herders, whose generational knowledge reaches farther back. The following excerpts highlight the broader perspective traditional knowledge can bring to current wildlife management issues.

Nathan Hadley is a longtime herder from Buckland. He learned herding from his father and obtained his herd from him. He was interviewed Jan. 26, 2001.

"When I was 14 years old - in 1954 - me and my friend Jimmy Gregg went rounding up with my father, Paul Hadley, and Marvin Thomas. Marvin and my dad were with the main herd, and Jimmy and I went to go pick up that one little bunch and there was this one big bull... We tell my father there's the biggest reindeer we ever saw in our lives. Marvin and my dad hurry up and dress up, go up there and butcher that caribou. That's when they [the caribou] first come in - in 1954... Anyway, they used to be here long time ago."

Herb Karmun received his herd from his father, Alfred Karmun, and herded many years in the Deering area. He was interviewed Oct. 4, 2000.
"When we first got started in the reindeer business, the old people used to say, 'Well, caribou used to migrate through the whole [Seward] peninsula in the early days.' They keep saying, 'You watch it. They're gonna come back.' I said, 'Come back where?' 'You know, the same area that they migrated when they first started.' History repeats itself. They all came back - and they're still going through. Decimated my herd to zero. Sheldon, Hadley, Merlin Henry... half a dozen herds gone. That really hurt." 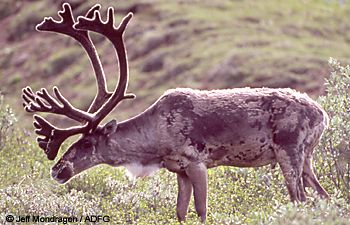 Dan Karmun is the former Program Director of the Reindeer Herders Association, and the former extension agent for the Cooperative Extension Service in Nome. He was interviewed Jan. 23, 2001.

"My brother would tell me stories about when the caribou begin to disappear from the scene, just right before the 1900's... Right up there at Imuruk Lake there was people, Natives that lived there, who had a trail from the Lava Beds up to the south side to where they had their camps. And whenever the caribou would begin to come around, they would use the Lava Beds as a source of getting them [by chasing them into the potholes.] In the Lava Beds there's a lot of holes where they [the caribou] would drop in... and they would catch their caribou by that means... So the presence of caribou must have been there before 1891, when the reindeer was introduced. That was according to my brother."

"I'm not a professional in the caring of the caribou, but I guess history kinda tells us that when there's a depletion of food source - let's say in the caribou area - they tend to come in [west] from their north to south migration, to maybe look for a food source. If the caribou had been here in the early 1800s, then probably that food source was beginning to deplete [by the late 1800s] so they moved away. And now their migration begins to come down and look for food sources again. That's what I'm beginning to think after being involved in the reindeer industry... Our ancestors always told us that one day the caribou is gonna come back again. I think that's becoming true."

When the project is complete the interviews plus photographs will be available on CD to schools and other interested groups, and several radio programs are planned. For more information on conducting oral history projects contact Bill Schneider, UAF Oral History Program, (907) 474-5355, or ffwss@uaf.edu. This project was funded by a National Science Foundation grant to Knut Kielland, UAF Institute of Arctic Biology, with additional support from Greg Finstad, UAF Reindeer Research Program.