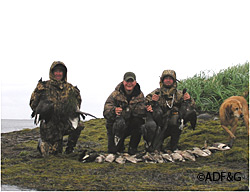 Some of Alaska's special areas are sanctuaries for wildlife, while others, like refuges, provide outstanding hunting opportunities, especially for waterfowl hunters.

This year marks the golden anniversary of Alaska’s state wildlife refuge program, which protects popular areas such as the McNeil River and Pack Creek sanctuaries, and the Mendenhall Wetlands and the Anchorage Coastal refuges. There are 32 State Refuges, Critical Habitat Areas and Sanctuaries across Alaska in the program, visited by hundreds of thousands of people each year.

Potter Marsh is part of the Anchorage Coastal refuge.
Some areas are near urban centers and are heavily used by birders, dog walkers, runners and families looking for an outdoor experience close to home. The 4,000 acre Mendenhall Wetlands refuge offers a wide range of outdoor of outdoor recreation opportunities including waterfowl hunting, and is entirely surrounded by the city of Juneau. Others are remote. Some, like the famed bear viewing areas, are closed to hunting, while others provide outstanding hunting opportunities, especially for waterfowl hunters.

A total of 3.2 million acres are protected, about the same area as all of Alaska’s state parks, which are managed by the Department of Natural Resources (DNR). Fish and Game manages the refuges, and the emphasis is on the wildlife.

“Basically refuges are to protect the habitat and the fish and wildlife populations,” Meehan said. “Generally most refuges are open to traditional harvest activities. Critical habitat areas are very similar, to protect and preserve habitat, but there’s generally a species or suite of species we’re trying to protect, like waterfowl or shorebirds. Kachemak Bay was mainly for marine fish and wildlife. Clam Gulch (on the Kenai Peninsula) is primarily to protect clams. There is hunting allowed in the areas, with some restrictions.”

Meehan said sanctuaries are set aside to give asylum to important featured wildlife populations. Brown bears are protected at Pack Creek (AKA the Stan Price State Sanctuary) and McNeil River, and walrus are protected at the Walrus Islands (Round Island is the primary wildlife viewing destination there). There is a limited Native Alaskan hunt of walrus in the Walrus Islands, with a take of 20 animals per year allowed. 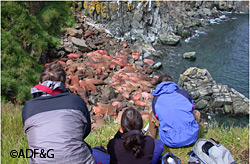 “The sanctuary also protects all the other animals in those areas as well,” Meehan said.

Walrus Islands is a personal favorite of Meehan’s. “I spent six years living in the Aleutians, and the place is similar. It’s alive, you've got sea lions feeding, seabirds everywhere, walrus grunting and growling and kittiwakes cackling.”

The Walrus Island Sanctuary was created shortly after statehood, on April 13, 1960. “That was the very first – what the State Constitution refers to as ‘special purpose sites’,” Meehan said. “That allows land belonging to the state to be set aside for special purposes.”

The State Constitution empowered the legislature to set aside these special purpose sites: “The legislature may provide for the acquisition of sites, objects, and areas of natural beauty or of historic, cultural, recreational, or scientific value. It may reserve them from the public domain and provide for their administration and preservation for the use, enjoyment, and welfare of the people.”

Meehan said McNeil River State Sanctuary was set aside in 1967, and the Chilkat River State Critical Habitat Area in 1972. A number of areas were designated in the early 1980s. At this fiftieth anniversary in 2010, there are now three sanctuaries, 17 critical habitat areas, and 12 refuges. There are also two state ranges, the Delta Bison Range and Matanuska Moose Range.

“Those two are somewhat different,” Meehan said. “We don’t manage the land, DNR does that.”

The Homer Airport Critical Habitat Area is the most recent addition to the program, established in 1996.

Depending on the area, Fish and Game is involved in day to day operations. “We manage Potter Marsh and do all the education and public use programs,” he said. “We’re currently doing a lot of work in the Palmer Hay Flats, building bridges, trails, and boardwalks; repairing roads and doing maintenance so anglers and hunters have better access. We’re improving access. At the Homer Airport (State Critical Habitat Area) we’re repairing and building boardwalks to help birders, and we’re putting in interpretive panels in Anchorage Coastal and Palmer Hay Flats.”

The areas have different management requirements. Meehan said Fish and Game is responsible for the development of management plans and permitting any land use activity. Some areas have cabins that are grandfathered in for the life of the occupant. Some refuges, especially near inhabited areas, have problems with illegal activities that are detrimental to habitat and wildlife. 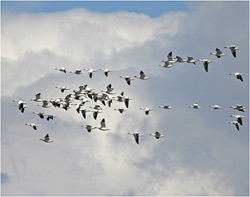 There are 32 State Refuges, Critical Habitat Areas and Sanctuaries across Alaska in the program, visited by hundreds of thousands of people each year.

“In some areas we see tree cutting, dumping, target shooting, burned out and shot up cars, and thousands of shell casings,” Meehan said. “We’re trying to drive away the illegal activities while promoting use of the area.”
Meehan said the Palmer Hay Flats benefitted from a citizen action. “The local community really stepped up to help clean up the area,” he said.

“Wolverine Creek is seeing about 10,000 people a year going into this very small bay to fish, watch bears, or both,” he said. “We’ve been working on management issues there with bears – how to fish and handle fish, and give bears the space they need, and it’s been working out well. There is a concern about overcrowding and we’re working to provide a good quality experience. It’s a difficult one to tackle. Some have suggested that we restrict the numbers of people, but that’s not something we like to do.”

For more information, see: http://www.adfg.alaska.gov/index.cfm?adfg=protectedareas.main
Riley Woodford is the editor of Alaska Fish and Wildlife News and an avid user of the Mendenhall Wetlands Refuge.