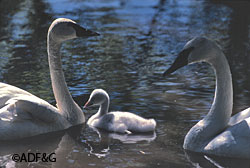 Trumpeter swans with a cygnet.

In mid-April, just outside Whitehorse, Yukon Territory, thousands of migrating tundra and trumpeter swans mass at M'Clintock Bay and on nearby waters along the Yukon River. For those of us from Southeast Alaska this tremendous gathering is just about two hours up the road from the ferry dock at Skagway and going to see the swans is a rite of spring.

Weighing 28 pounds, with an eight foot wingspan, male trumpeters are the largest waterfowl on earth. Females are smaller and tundra swans are smaller yet. From a distance they're hard to tell apart but up close most tundra swans have a yellow spot on the lores, the area between the eye and bill. Trumpeters have a thin salmon-red stripe along the gumline and a more pronounced black mask than tundras. You can tell trumpeter swans by their bugling call 'KO-HO.' There's nothing else like that sound and once you've got it, you will pick it up anywhere these animals fly.

M'Clintock Bay has all the assets that draw swans: open space where birds can watch for predators and enough open water for take-off. Swans need more than three hundred feet of runway and warm water from Marsh Lake keeps part of the Bay ice free most of the winter. Nutrient rich silt from the M'Clintock River supports prodigious aquatic plant growth. Water levels are low in spring so swans can reach the bottom to dabble. Dabbling is where water fowl tip their feet to the sky and stick their heads underwater to graze. Where water is shallow enough they'll uproot rhizomes and tubers with their feet before dabbling. Swans at M'Clintock Bay get temporarily rust colored heads and necks from iron rich sediments on the bottom. Trumpeter swans can eat more than twenty pounds of pondweed per day. While eating plants they pick up invertebrates, fish and eggs as well. 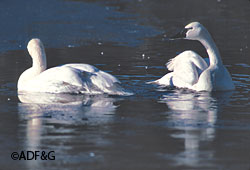 Most swans resting at M'Clintock breed hundreds of miles from Whitehorse. It will be about 35 days from when the eggs are laid until they hatch and another hundred-five days until the cygnets take their first flight. To get the cygnets strong enough to fly home in the fall, parents have to lay eggs as early as possible. At Swan Haven there are always birds flying north and returning. When the scouts flying north stop coming back thousands of birds clear out in a few days.

Trumpeter swans are magnificent to see and they're a magnificent environmental success story. Once common across North America, they were nearly exterminated in the early 1900s by over hunting for meat and feathers. The 1935 trumpeter swan count found just sixty-nine birds in North America. Birders thought those were the last remnants until a larger population was discovered in Alaska in the 1950's. Thanks to the Canada/United States Migratory Bird Treaty, hunting moratoriums, banning lead shot, ensuring wintering habitat like Red Rock Lakes National Wildlife Refuge in Montana and the Comox Valley on Vancouver Island, trumpeter swans have made a comeback. Re-introduction programs and increased public education about not disturbing resting birds or letting pets chase them have helped trumpeter swans expand their ranges. These birds have rebounded to an estimated twenty-two thousand birds in Alaska and ten thousand elsewhere in the US and Canada. Tundra swan numbers are stable at about 110,000.

In addition to swans, visitors to M'Clintock Bay in April can see northern pintails, widgeons, loons, grebes, geese, hawks, and ducks such as teals, mallards, northern shovelers and golden eyes. More than one hundred-thirty bird species have been observed there. 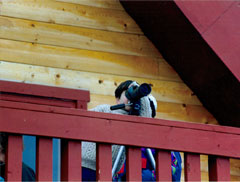 In 1994 the Yukon Government's Wildlife Viewing Program, the Girl Guides of Canada and Ducks Unlimited Canada built Swan Haven Viewing Centre right on M'Clintock Bay. The turnoff is at Km 1441.8 just past the Yukon River Bridge. A short drive down the dirt road brings you to a small subdivision which includes the Viewing Centre. There are spotting scopes, interpretive displays, programs and community events at no charge. Peak time is usually the third week of April. Celebration of Swans for 2010 is April 17-25. Below is a link to the Swan-Cam operated by Energy Yukon from April to mid-May. For more information call the Wildlife Viewing Program, Department of the Environment 867- 667- 8291. KO-HO!

Dick Callahan is a Juneau author and an information officer with the Division of Sport Fish at the Alaska Department of Fish and Game.