Is Wildlife Tracking a Lost Art? 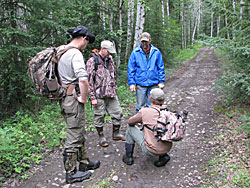 Adrian stepped beside me and quickly raised his hand to freeze me in place. I knew he had detected something so I began looking around to see what he was seeing. Was it the elk we had been tracking for the past half hour? I assumed it was but I didn’t see it. Then he pointed ahead of us about 30 yards to a black-tailed deer bedded down on a small hummock in the forest. We watched her for quite a while, remaining silent and motionless. Then Adrian signaled for us to retreat and whispered, “We will leave her undisturbed. If we spook her we may spook the elk as well. We’ll let it be for now.”

I’ll admit I was kind of embarrassed that I didn’t see the deer. I think I have good forest eyes and I don’t miss much in the woods. But I was trying to follow a fresh elk trail and I was breaking a cardinal rule of game trailing. Something Adrian had just told us. “Don’t look at the ground in front of you when you are trailing an animal. Look ahead, five, ten or more yards for sign on the ground and then you will also see the path that the animal would likely follow.” Easier said than done, I thought. I didn’t want to lose the elk trail so I was constantly looking for confirmation tracks. Amateur yes, but that’s why I was at the class; to learn and practice.

Adrian Louw is one of the top trackers in South Africa and he was visiting the U.S. to teach wildlife trailing classes at outdoor skills schools around the country. Adrian is well regarded in South Africa as a tracker and teacher. He makes his living tracking dangerous game for the tourism industry. He is also an evaluator for the tracker evaluation system called CyberTracker which I will get at shortly.

Tracking wildlife was a common skill for our ancestors. It was a matter of life and death. Seeing sign, making inferences about the animal, and utilizing that information to find it (and kill and eat it) is why tracking is considered by some to be one of the oldest sciences.

But today tracking is considered by many to be a myth of the past. This is perpetuated by the entertainment industry which typically presents tracking as though it was a secret power only held by unique individuals. It is also going by the wayside because, as a whole, we do not spend much time in the woods anymore learning the survival skills of our ancestors. Even hunters, who may benefit from tracking the most, may not spend much time learning or practicing. Indeed, modern gadgetry and advertising leads us to believe that the only way to find a wounded animal is by a blood trail. But this is not so.

Adrian was taken aback when he first came to the U.S. and talked to some people about tracking. “People called themselves trackers if they could identify a track. Someone would be a bear tracker if they can identify a bear track,” he joked. But a tracker per se, someone who can identify a fresh animal trail and follow it until they find the animal, is what he had in mind.

I asked him once how a person could follow a deer or bear trail when it crosses the path of other deer or bears or comes to a feeding area, for example?

He relayed an interesting story about the cattle-herding Shangaan people in South Africa. “By the time the kids are teens,” he said, “they know all of their fathers’ cattle by their individual tracks and they can go and find them in a mixed herd of village cattle. And if you go to someone’s home and they are not there then you simply follow the tracks if you need to find the person.” It is just a common skill learned from childhood and you can figure it out by experience and behavior. 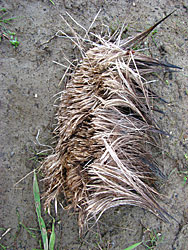 Moose hair cut by wolf carnasials a kill is nearby. Hair is another type of animal sign like tracks.

It sounds pretty fantastic, but I have seen some amazing trackers at work. Brian McConnell, somewhat of a tracker prodigy, is one of them. He came to Alaska to teach a game trailing class and I was fortunate to spend several days with him. His awareness and his ability to follow sign are amazing. He can see an animal trail where you and I see nothing until he points it out. With his stick in hand he will patiently point to broken plants, bent leaves, small traces of dirt kicked forward on the forest floor, bark scraped off miniature shrubs or roots. Each step of a human or animal becomes as plain as day, one he points them out.

Brian is humble and he insists that anyone can learn to track if they practice, practice, practice. I think it is also important to have a good teacher to help you get started. When I ask Brian about individuals with exceptional tracking skills, he says, “They are just a man like you and me.” He is very encouraging that way.

Both Adrian and Brian are evaluators for CyberTracker International. CyberTracker started as ecological data collection software created to employ illiterate African Bushmen in collecting their expert knowledge of the land. But to verify the knowledge of the data collectors, founder and biologist Louis Liebenberg also developed an evaluation system to find out who was an expert and who was not. Inaccurate data after all, is bad data. And as they say, “everyone is a good tracker when they are by themselves.”

This evaluation system was brought to the U.S. by Mark Elbroch and is gaining in popularity with individuals interested in testing and developing their wildlife knowledge, and with biologists and other wildlife agency personnel who use track and sign to catalogue wildlife.

Currently, The CyberTracker Evaluation system is the only international standard for evaluating and certifying wildlife trackers and has proven to be both an excellent measure of observer skill level and an innovative training tool.

If you really want to test your knowledge in identifying wildlife track and sign, or with game trailing, then you should sign up for one of the evaluations.

There are two main evaluations within this system. One is the evaluation strictly for identifying wildlife tracks and sign (no game trailing). And the other is the evaluation on trailing an animal. In either evaluation you will likely spend two long days in the field with an evaluator answering questions about tracks and sign (it is typical to have anywhere from 60 to 100 questions about any and all type of wildlife sign they can find). Or if you are trying the trailing evaluation (actual tracking) you spend two days with a trailing evaluator following a fresh animal trail. This could be a deer, an elk, or a moose, or at higher skill levels, a soft-footed animal such as a bear or a cougar. 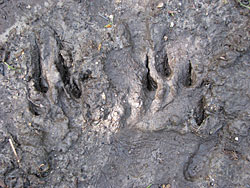 Most importantly however, when you take these evaluations you are essentially receiving a two- day class from some of the top trackers in the country. They don’t just score you. They explain everything to you.

There are many reasons to study wildlife tracks and sign; pure knowledge and enjoyment is one. People are curious to learn what animal left tracks or scat or other sign in an area. It seems to be innate; to want to know what creatures you are sharing the woods with.

There are practical reasons. Ecological knowledge is one. Cataloguing or inventorying wildlife in an area. Animal appearances are fleeting but tracks and sign may last for days, or longer. Tracks are used to document rare and endangered species in many areas of the country.

Tourism and guiding is another. A guide can enhance visitors’ experience by identifying and interpreting tracks and sign, telling a story and painting a picture of something that happened where they stand, only at a different time.

To be a true tracker, you need to be good at identifying sign and at trailing game. These skills have incredible value whether you are a photographer or a hunter; whether you are looking for a live moose or trying to retrieve one you shot.

So is wildlife tracking a dying art? Perhaps it went through a dying phase but there are lots of people who are breathing new life into it today. Thankfully, for it is one of the most fundamental outdoor skills we have ever had.

When Brian finished his class here in Fairbanks, a few of us stopped by a friend’s cabin to fix the tenant’s outhouse. The outhouse was half-tipped over but got hung up by the electric cord running to it. We heaved it back in place and were baffled by what had happened. Did the frost heave it out? This was August. The wind? This is Fairbanks, what wind? Brian walked up, looked around the outhouse and said, “Two people walked over here and pushed the outhouse over.” He then showed us their heel marks in the dirt and motioned how they pushed. We told the renter and he admitted to having a party the night before where some friend may have played a joke on him. Mystery solved by a couple marks on the ground… and one good tracker.

For more information about tracking and evaluations visit:

Mike Taras is a wildlife education and outreach specialist for the Alaska Department of Fish and Game in Fairbanks, Alaska.