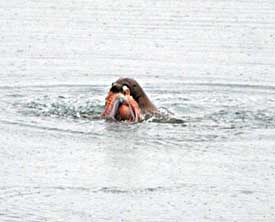 A Steller sea lion holds a giant North Pacific Octopus in its mouth and prepares to dismember it. The octopus was estimated at about 25 pounds. Staci Augustus photo

A rainy late-December walk on a north Douglas Island beach revealed a wildlife spectacle for Staci Augustus of Juneau. She saw a Steller sea lion thrashing around on the surface of the water near the beach and began photographing it.

“It was eating something – I couldn’t tell what at the time but I figured it was a fish or crab.”

She shot the activity for about five minutes and didn’t realize exactly what was going on until she downloaded the pictures. Displayed on the computer screen it was apparent the sea lion had an octopus. It’s a giant North Pacific octopus, and marine biologist Sherry Tamone of Juneau estimated its weight at about 25 pounds. A scuba diver as well as a professor at the University of Alaska Southeast, Tamone has worked with octopus and has an appreciation for the big mollusks.

“I have caught 80 pounders in Kachemak Bay and around here I only get five to 20 pound octopuses in shrimp pots. They actually can get larger than 200 pounds off of British Columbia, but up here that range is reasonable.” 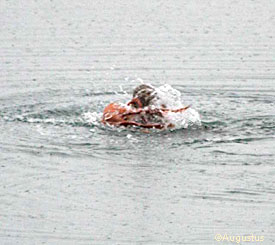 The giant North Pacific octopus is both a predator and a prey item. Staci Augustus photo

From the photos it seems that not only are they tough, they don’t give up easily. Tamone said it could take some effort to subdue a 25 pound octopus.

“The octopus can wrap itself around the head of the sea lion and it can bite pretty fiercely. Their beak looks a bit like that of a parrot and each bite delivers some nasty chemicals,” she wrote in an e-mail.

The giant north Pacific octopus is the largest species of octopus in the world. They live a short, active, spawn-and-die life, typically growing to 70 or 100 pounds in their three-to-five year life span. They mate in the spring and the males die within a few months. The females lay 20,000 to 100,000 eggs, tend them throughout incubation (five to seven months), and die shortly after the eggs hatch.

They are found from the intertidal to depths of 2,000 feet, and are sometimes found in tide pools. Tamone said they are very common in Southeast Alaska and are frequently caught in shrimp pots. They can be sold for bait or export (provided the fisher has a permit), or taken home for dinner. 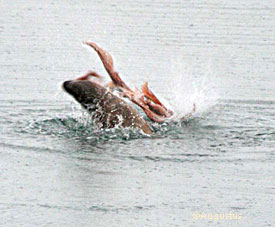 The sea lion appears to pull an arm off the octopus. Staci Augustus photo

“They are very tasty when prepared well but can be very chewy,” Tamone wrote. “Lots of things eat them. Halibut love them and if you look at the stomach contents of a large halibut you may find some undigested beaks from multiple octopuses.”

Octopuses themselves will eat anything they can get their eight arms on and love scallops, crab, shrimp, and fish, Tamone noted.

Staci Augustus may have been surprised to see this octopus, but it was not her first sighting.

“I remember fishing for halibut off of Coughlin Island in Auke Bay around 1982 and I caught a 35 pound octopus. We did keep it and ate it - my dad did a great job of making it not so chewy. I kept the beak and some of the ink for many years.”