Alaska Game Transplants
The Good, the Bad and the Unwanted 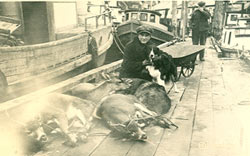 Ike Hanlon and Tuffy, around 1923, with deer from Baranof Island ready to ship north.

Raccoons and wild hogs are among the weirdest animal transplants attempted in Alaska’s history. "Game Transplants in Alaska," a new publication by Fish and Game, chronicles the successes, failures and sometimes misguided attempts to move wildlife into and around Alaska.

Tom Paul researched and wrote the 150-page book, building on a much smaller first edition produced in 1973 by Oliver Burris and Donald McKnight. For years department employees referred to dog-eared, stapled photocopies of “Burris and McKnight,” and Paul said there had long been interest in updating the original edition.

From Russia’s fox farming industry in the Aleutians 250 years ago, through introductions mandated by the territorial legislature early in the 20th century, to modern efforts using helicopters and immobilizing drugs, the book covers official and “outlaw” introductions. These include the (unsuccessful) attempts by private individuals to introduce raccoons to southern Southeast Alaska and European wild hogs to Marmot Island near Kodiak.

"Game Transplants in Alaska" documents scores of efforts to move about two-dozen different species, and many sections include engaging stories and first-hand accounts.

The book provides insightful details about the evolution of capture and release techniques used over the years as biologists built on lessons learned about drugs, traps, handling and transporting animals.

The story of 19-year-old Ike Hanlon and his dog Tuffy is an interesting look at animal captures decades before immobilizing drugs and dart guns came on the scene. In the early 1920s Ike and his dad William caught at least 30 deer in the Sitka area, deer that were used to establish populations on Kodiak Island and in Prince William Sound. 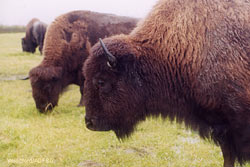 Plains bison, such as these at the Alaska Wildlife Conservation Center, were first introduced to Alaska in 1928.

Tuffy was trained to chase and herd deer into the sea, where Ike waited in a small skiff. Ike rowed up to the deer, grabbed its tail and pulled the rear end of the animal into the skiff and wrapped the legs in cloth to protect them. Then he tied the legs, lifted the front end into the skiff, and tied the front legs. The deer were shuttled to a larger boat and then taken to Sitka for transport across the Gulf of Alaska. Hundreds of thousands of deer, providing venison for Alaska families, eventually descended from these transplanted animals.

Tom Paul started the project shortly before he retired from the Division of Wildlife Conservation in 2007. In his 26-year career with the department, Paul served as a wildlife planner, field technician, federal aid coordinator, and timber sale reviewer.

“I had a lot more time to work on the book after I retired,” he said.

“Once I started I learned of transplants that were not in the original, stuff I’d never heard about,” he said. “Retired biologists were very helpful with materials, interviews and leads.”

Some leads were serendipitous. After Paul spoke at a presentation for the Sitka Natural History Association, he was approached by retired wildlife biologist Jerry Deppa.

“He told me, ‘I was in charge of the Southeast Alaska end of the sea otter transplants,’” Paul said. “Then through phone calls and e-mails he gave me the specifics on how the sea otters were captured and held, and the special containers that were made to keep them alive for the flight down from Amchitka in the Aleutians. They were doing atomic tests in Amchitka, and these guys with Fish and Game and the Fish and Wildlife Service convinced the AEC that it would be a good idea to do something with these sea otters before they were nuked.” 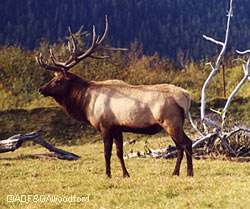 Elk are not native to Alaska but have been introduced to several areas.

In some cases, details are available as to why transplants failed. Often habitat and climate were marginally suitable, and animals simply failed to thrive. An early attempt to introduce elk to Gravina Island in Southeast Alaska was thwarted when a homesteader frustrated by the human-habituated “nuisance animals” shot all eight young elk. Six attempts to introduce elk to Southeast Alaska failed before elk were established in the mid-1980s.

There have been some real successes as well, Paul said. “The re-introduction of muskox to Alaska, the Copper River moose transplants, deer to Kodiak, among others.” Eighteen mountain goats translocated from Tracy Arm to Baranof Island in Southeast grew to a population of 1,500 by 2004.

"Game Transplants in Alaska," is accessible at the Fish and Game website. There are not plans underway to market the book commercially, but some print versions are available by contacting Patti Harper at 465-4176 or dfg.dwc.publications@alaska.gov.

The publication is online as a PDF on the Fish and Game website. It can be accessed at:http://www.adfg.alaska.gov/static/home/library/pdfs/wildlife/research_pdfs/game_transplants_alaska.pdf