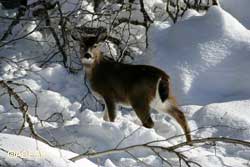 November is prime time for Southeast Alaska deer hunters. Bucks are active and may respond to calling, the leaves are off the trees and visibility is good, and most deer have dropped out of the alpine down into the forests.

The past three snowy winter hammered deer populations in northern Southeast Alaska. Deer numbers are down – way down in some areas – but there are a few things hunters can do to better their chances and improve the overall situation in the years to come. The best bet this fall is to steer clear of the hardest hit regions, focus on areas where deer survival was better, and pass over does so they can rebuild the population.

“The deer are bouncing back in Peril Strait, down to Necker Bay, and that’s looking much better,” Mooney said. “The numbers in Tenakee Inlet are not bad. Pockets are doing better than others, it’s related to access and aspect and habitat.”

A person might be born rich or poor, but for a deer, it’s born on the north side or the south side. Pockets of south-facing habitat are more likely to have provided food and refuge to deer in recent years.

Douglas Island and the Juneau mainland are biologist Ryan Scott’s management responsibility, and he said deer on Douglas may be better off than those elsewhere but they are still tough to find. “People are harvesting deer on Douglas, but it’s not gangbusters,” he said. “Last year was pretty tough on those guys. Deer on Douglas have not had the opportunity to rebound. That’s the case almost everywhere in northern Southeast.”

The Juneau-area mainland is always a bucks-only hunt, but it is generally legal to take does in the fall on the northern Southeast islands. Last year, and this year, does season has been closed on northern Chichagof (around Hoonah) because deer numbers are so low there. Mooney said a number of hunters are recommending to him that doe hunting should be closed throughout Admiralty, Baranof and Chichagof Islands. 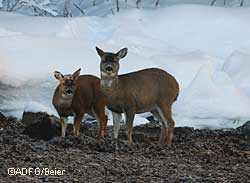 Northern and eastern Admiralty and Chichagof islands were hard hit in recent winters, but deer persist in localized pockets. The aspect of the habitat is important. LaVern Beier photo.

“The reason we’ve done it for north Chichagof is that the ferry brings in more hunters, the road system allows great access to the interior of the island,” he said.

He added that significant forest fragmentation from timber clearcuts has reduced deer movement and cover during the winter. Chichagof has a fair amount of natural landscape fragmentation such as muskegs that also don’t provide good winter habitat and cover.

“In this case, the combination of both natural and man-made fragmentation has been tough on deer,” he said. “Other areas just don't have the ease of interior access and the bulk of the hunting effort occurs within a short distance of the shoreline. As the daylight period shortens, access time is even less.”

Mooney is poised to close the doe season if it’s necessary. He wants to see enough pregnant does survive the winter to begin rebuilding the population. That hasn’t started yet.

“We're looking really close at the weather,” he said. “If we get 21-inches of snow, brisket height on a deer, around the first of November, we’ll look at closing doe season. We don’t want an overharvest of does, especially during that period when they’re getting pregnant.”

Mooney and Scott appreciate that hunters understand the importance of does. Mooney pictures one of those hardy survivors when he talks about the state of the deer population today. November 2006 and March 2007 brought heavy snows that bookended a killer winter for deer, and his hypothetical doe, a six-year-old in her prime, pulled through that winter.

“She probably lost her fawns that winter,” Mooney said. “Then in 2008 we had another bad spring, cold and nasty, and a cold summer, and she probably lost her fawns again. She comes up to this year, 2008-09, it was a little better because the snowfall was spread out and that allowed the deer to keep their trails open and move around. This February I was doing surveys and there were lots of trails, and it was looking good, and the deer were generally in good condition. Then March came and that was cold, with more snow, and that continued into April. The beach rye and skunk cabbage that should’ve been popping up wasn’t, not until end of April, so we lost ground and it was visibly noticeable in the deer.” 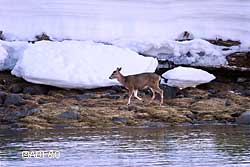 “So now that doe is past her prime. If she dropped a fawn this year it was probably single, not twins, thus the recruitment has not been good. The fawn coming in to this fall will not be bred. If she has a good winter she breeds next year. We need three years of good fawn survival to make a difference in the population.”

In addition to field surveys, state biologists gather information on deer in a variety of ways. They talk with hunters, and draw information from thousands of questionnaires that are sent to southeast deer hunters every year. Deer pellet transects are conducted in the spring in specific watersheds, providing insights into trends.

By all indications, numbers are way down on Shelter Island, Mansfield Peninsula on northern Admiralty Island and Glass Peninsula on the east side. East Chichagof was hit pretty hard, Mooney said, and the population is way down.

“The north end of Chichagof is in tough shape, and the west side is not a lot better,” Mooney said. “Yakobi Island might be an exception. It’s all about winter food and cover.”

Deer research on Prince of Wales Island provides a general idea of how much habitat a Sitka black-tailed deer needs, and what deer densities are in good years in good habitat. Mooney said that work indicates 20 to 25 deer per square mile. That’s about one deer per 26 to 32 acres. A NFL football field is 160’ x 360’ feet or 1.3 acres.

“An area encompassing 20 to 25 football fields is about the area needed to support a deer, and that’s good habitat with forage for winter and summer, with a mix of canopy cover and open areas,” Mooney said.

Mooney said what we need now is a couple of back to back “normal” or mild winters followed by a Spring that starts to show some green-up in March and not the end of April. Deer essentially live through the winter on a maintenance diet in northern southeast Alaska and delays in the arrival of spring-green-up have taken its toll as well as the snow. From now to next May, Mother Nature holds the balance of the cards to be played.

Riley Woodford is a writer with the Division of Wildlife Conservation at the Alaska Department of Fish and Game. He produces the Sounds Wild radio program and edits Alaska Fish and Wildlife News.