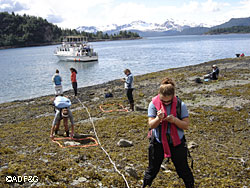 Students conduct an intertidal transect of a beach at tidal Inlet in Glacier Bay, examining and documenting to flora and fauna

A new summer camp from the University of Alaska Southeast, with help from the Alaska Department of Fish and Game, took 15 high school science students out of the classroom and into the wilds of Glacier Bay and Little Port Walter on Baranof Island.

The students got a "visceral" learning experience, according to UAS Environmental Science teacher, Cathy Connor, who was on the Glacier Bay leg of the trip. The camp, Discover Design Research, took place from June 20 through June 30. Students spent five days in Juneau gaining kayaking and outdoor skills, and learning geology and marine biology, before heading out to the wilds of Alaska.

"This is a place where scientists come from all over the world to see what these students saw," said Clay Good, a UAS adjunct teacher who taught oceanography and biology in the bay. 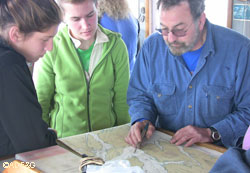 The other five students flew to Little Port Walter, where they learned about salmon, aquaculture and practiced marking and recapturing fish in two nearby streams.

Rhyan Holmes, a rising junior from Juneau, described it: "You would grab a fish and put it in ... a bucket that's full of normal water and then you would put two or three fish into another bucket that has drugs in (it), (the drugs) kind of slow down their breathing so they stop moving so you can handle them easily, and we'll grab them, we'll measure them ... and then we would weigh them and we would have someone clip off the top tail."

After the fish recuperated, the students returned them to the stream and set more traps. When they returned to see how many marked fish were recaptured, it indicated the fish population in the stream.

"I think the important, take-home message is, 'What is science and how does it work?' So we were showing them. They were learning by being scientists," Connor said.

The students collected their own data and drew conclusions, which they presented June 30 at a symposium at the Egan Lecture Hall at UAS. 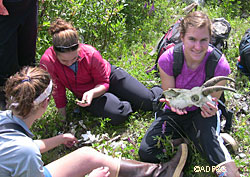 The group was made up of four boys and 11 girls going into grades 10 through 12. Twelve of them were from Juneau and the other three from Wasilla, Nenana and Illinois.

Adam Nelson of Illinois said he is eager to return to Alaska next summer and hopes to work on a boat. He is now looking into attending UAS when he graduates, he said.

This is the camp's first year, but organizers plan to continue it. The camp cost $1,500 and was underwritten with grants through the Juneau Economic Development Council. The Springboard program was integral to the camp.

This article first appeared in the Juneau Empire. It has been reprinted with permission and additional material.