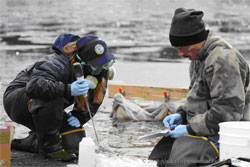 About ten years ago, Cheney Lake in Anchorage was a very popular place for local families to fish for rainbow trout. That was until northern pike were illegally introduced to the lake. Northern pike are an invasive fish species in Southcentral Alaska. They were discovered in Cheney Lake in 2000, and ADF&G stopped stocking the lake to avoid wasting hatchery fish as prey for pike. In a few years time, the only fish that remained in Cheney were small northern pike, threespine stickleback and non-native Alaska blackfish. Consequently, the sport fishing effort in the lake decreased to less than one quarter of what it had been before the pike were introduced.

At the same time, a similar scenario was playing out on the Kenai Peninsula. Arc Lake in Soldotna, just off the Sterling Highway, was also a popular and highly accessible ADF&G-stocked fishery. Northern pike were illegally introduced to that lake as well, and just like Cheney, hatchery fish were no longer stocked there. In Arc Lake, the invasive pike depleted everything, including the forage fish.

So why were the fisheries destroyed in these two Southcentral lakes? This is because the northern pike is a top-level predator in aquatic ecosystems and is not native to Southcentral Alaska. Pike occur in interior Alaska and in the Bristol Bay region but never naturally colonized waters south of the Alaska Range. Pike are ambush predators, and they prey on anything they can. Their preference, however, is for fish. In Southcentral Alaska, shallow vegetated lakes and slow moving river sloughs provide crucial habitat for rearing salmon and trout. Unfortunately, these areas are also habitats where northern pike thrive. Where such habitat overlap exists, northern pike can deplete salmon and trout populations.

Northern pike are predators where they naturally occur too, but there are some differences from Southcentral Alaska. In the mid-western United States, northern pike are one of the most popular native sport fish in that region. Their predatory nature makes them a very fun fish to fish for. However, if you think about it, the mid-western states have a much larger diversity of fish species with all of the sunfish, bass, catfish, and minnows, etc. Pike are predatory, but their effect is spread over a wide variety of species. In Southcentral Alaska, the lower fish diversity means that northern pike can have a larger predation rate on any given fish species. In Interior Alaska, there are also more whitefish and ciscos than there are in Southcentral, and, again, this diversity spreads out northern pike’s predatory impacts. Also, the pink and chum salmon that are so abundant in Interior Alaska head out to sea soon after hatching. In Southcentral, sockeye, coho, and Chinook salmon rear in fresh water for one- four years before going to the ocean and are vulnerable as pike prey that entire time.

As with wild fish, hatchery-produced fish can be quickly depleted when northern pike are illegally introduced into ADF&G-stocked lakes. This was illustrated in Cheney and Arc Lakes as mentioned earlier, but the stories in these two lakes actually have happy endings. This is because the invasive northern pike populations in both lakes were removed last fall. ADF&G accomplished this by applying a common piscicide called rotenone to the lakes. Rotenone occurs naturally and is derived from the roots of tropical legumes. It has been used by indigenous peoples throughout the tropics for centuries to gather fish for food, and it has been used by fishery managers in the United States since the 1930s to remove unwanted fish. Rotenone kills fish by blocking the absorption of oxygen through the gills during cellular respiration. This inhibits the ability for fish to metabolize oxygen. All organisms with gills can be affected including aquatic life stages of insects and zooplankton, but rotenone is not harmful to birds or mammals at the concentrations necessary to kill fish. To remove northern pike, rotenone is heavily diluted and applied at a concentration of only about 1 ppm (0.05% active rotenone ingredient). Most warm-blooded species cannot drink enough rotenone-treated water to get sick. For example, a 160-pound human would have to drink 23,000 gallons of rotenone-treated water before becoming ill

In October of 2008, both Arc Lake and Cheney Lake were treated with rotenone right before the lakes froze for the winter. Bathymetric surveys were conducted in each lake to determine the lake volumes and calculate the amount of rotenone necessary to achieve the target concentration of 1 ppm. Bioassay tests were conducted in each lake to make sure the concentration was sufficient to remove the pike. During the treatments, the rotenone was diluted through a pump and applied to the lake water from a motor boat. Following the treatments, ADF&G monitored the lakes throughout the winter to look for any surviving northern pike and to measure the degradation rate of the rotenone. Rotenone breaks down naturally, and this process can occur quite quickly in warm waters. Because the treated water was very cold, the Department wanted to learn how long it would take for rotenone to completely degrade in Alaska’s cold winter climate. 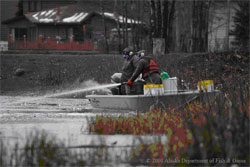 Rotenone is diluted and pumped into the lake from a motorboat

ADF&G planned the rotenone treatments to occur in the fall right before ice up for a couple of reasons. When rotenone is used in cold water, the product can work for a longer period of time and increase the chance of entirely removing the target species. Because rotenone primarily affects organisms with gills, treatments right before ice-up reduce unintended impacts to other species. For example, wood frog tadpoles are no longer in the water. Most aquatic invertebrate populations decline naturally in the late fall, and many of them burrow into the lake sediments for the winter. Rotenone does not penetrate more than a few inches in all sediment types, so burrowing invertebrates can escape the rotenone completely. This occurred in both Cheney and Arc Lakes last year. At ice out in the spring, there were many amphipods, water beetles, dragon fly larvae, snails, and other inverts observed in both lakes.

The rotenone in Cheney Lake was completely gone by mid-March of 2009. In Arc Lake, it lasted longer and was not fully degraded until late June of 2009. The difference in the timing likely resulted from differences in the conditions and water chemistry in both lakes. Cheney Lake had a lot more algae to bind with the rotenone and springs to dilute it. Arc Lake was more oligotrophic meaning it contained less algae and nutrients. It also had a much lower pH and alkalinity which can slow the rate of rotenone degradation. These observations from Cheney and Arc Lakes will be very useful for planning future northern pike removal projects.

In addition to monitoring the lake water, ADF&G wanted to monitor aquatic invertebrate populations in the lakes and, most importantly, ensure that no northern pike survived the rotenone treatments. At ice out in 2009, both lakes were extensively netted with variable-mesh gill nets to look for northern pike. No live northern pike were found in either lake, and the projects were deemed a success!

In Cheney, Alaska blackfish survived the rotenone treatment, but threespine sticklebacks were not detected during the post-treatment assessment. Alaska blackfish can breathe atmospheric oxygen and can also burrow into sediment. They are the hardiest freshwater fish in Alaska, and it is not surprising that some of them were found alive. Sticklebacks are a very important forage species for fish as well as waterfowl. In May 2009, to re-establish the prey-base in the lake, threespine stickleback were reintroduced into Cheney Lake. To the delight of both ADF&G and local residents around the lake, rainbow trout were stocked into the lake for the first time in ten years. Since then, according to Lynette Linns, a resident in the Cheney Lake area, “oodles and oodles of kids and a few adults have been trying their luck at the lake”. It has once again become a very popular place to fish. According to Rob Massengill, a sport fish biologist on the Kenai Peninsula, “Arc Lake will also be receiving coho salmon again for the first time since 2000”. This summer, Arc Lake will be stocked with coho salmon, and will once again provide an easily accessible fishery for the public.

In addition to restoring the sport fisheries in Cheney and Arc Lakes, removing the northern pike in those lakes served another extremely important function. Both of these lakes are located in close proximity to wild, anadromous rivers. Arc Lake is located less than two miles from the Kenai River which is world renown for its rainbow trout and salmon fisheries. Preventing the spread of northern pike and protecting both wild and stocked fisheries is of huge importance to ADF&G. By removing the northern pike from Cheney and Arc Lakes, the chances of them spreading to nearby waters was reduced. 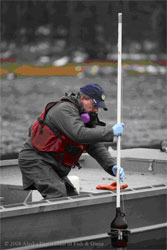 Testing the water after the rotenone treatment

This is why the Department is planning to treat two more lakes with rotenone this year. Sand Lake in Anchorage and Scout Lake on the Kenai Peninsula could be treated as early as this fall. Removing the illegally-introduced northern pike populations from these lakes will again help to prevent the spread of northern pike to proximate waters and allow ADF&G to rehabilitate the sport fisheries in those lakes. Both projects, however, are still in the planning phase, and public processes for both projects have just begun.

To use pesticides in the state of Alaska, applicators have to be state-certified, and the Alaska Department of Environmental Conservation (ADEC) must issue Pesticide-Use Permits for all treatments. As part of this permitting processes, project plans are made available to the public, and the public has 30 days to provide written comments on the proposals. Additionally, there is a National Environmental Policy Act process currently underway for both the Sand and Scout Lake projects. This involves preparing environmental assessment documents that describe both projects in detail. The environmental assessments are currently available online at: http://www.sf.adfg.state.ak.us/Statewide/InvasiveSpecies/index.cfm/FA/rotenone.currentProjects. People who are interested in these projects are encouraged to review these documents and provide comments. The official comment periods for both of these projects run from June 30 – July 30, 2009. The following website also has detailed information about rotenone and how it is used in fisheries management: http://www.adfg.alaska.gov/index.cfm?adfg=rotenone.main
Comments that the public provides will assist ADF&G with project plans and will also help the ADEC decide whether or not to issue the Pesticide-Use Permits. If you would like to provide written comments on either project, please submit them to Kim Jordan with the ADEC before July 30, 2009. Her contact info is below:

If all goes well and the permits are issued, ADF&G biologists hope to treat both lakes during late September or early October of 2009. Both lakes will again be monitored throughout the winter and spring to measure the rotenone degradation, monitor the invertebrate populations and water quality parameters, and make sure the northern pike are gone. If the post-treatment assessment work in 2010 indicates that no pike survive, the lakes will be restocked with rainbow trout and land-locked salmon.

As always, you can help ADF&G’s efforts to prevent the spread of northern pike in Southcentral Alaska. To start, you can help spread the word that invasive pike damage our fisheries. You can become involved in the public processes for pike eradication projects and provide comments during official comment periods. Lastly and most importantly, you can keep our fisheries healthy by not putting any live fish, pike or otherwise, into any water body and not moving fish between water bodies. This is illegal in Alaska and is a class A misdemeanor. If you witness someone other than ADF&G stocking personnel putting fish in a lake or stream, or catch an unusual fish, for example something you have never caught in that place before, please report it right away to your local ADF&G office or call Fish and Wildlife Safeguard at 1-800-478-3377.