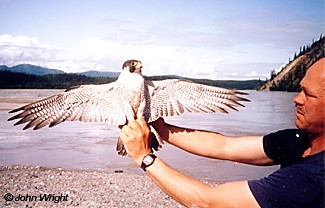 Wildlife biologist Peter Bente holds a peregrine falcon on the banks of the Tanana River. Alaska has all three of North America's peregrine falcon subspecies; some winter in South America and some remain in Alaska all year.

Silhouetted against an overcast autumn sky, the shifting V-shape of southbound geese embodies migration. Many of Alaska's hawks and falcons also migrate, but traveling singly or as small family groups, they don't advertise their departure from the north as dramatically.

Alaska's peregrine falcons are among the world's greatest long-distance migrants, flying deep into South America. Peregrines from Northern Alaska have been documented wintering as far south as Chile and Argentina. After a few months in the grasslands and pampas of South America, they return to the north, a round trip journey of more than 17,000 miles.

Most peregrines return to the same river bluffs and cliffs and re-use the same nest sites. The returning young tend to nest within a few miles of their parents on the same river system, but competition and other factors can cause them to disperse further.

Alaska Fish and Game biologists Peter Bente said as a general rule, the further north peregrines nest in the summer, the further south they winter. Peregrines in Southern Canada migrate into the central and southern U.S. for the winter, while Northern Canadian peregrines head to Mexico and Central America.

Peregrine mostly eat other birds. If waterfowl and shorebirds are abundant, Peale's peregrines will stick to their territory. But if resources are scarce, especially in the winter, they will leave in search of food.

This is called irruptive migration, and other Alaska raptors such as goshawks, gyrfalcons, snowy owls and great gray owls are also irruptive species. They don't migrate in the sense of regular seasonal movement, but will travel in search of food. Classic examples of irruptive Alaska songbirds are redpolls, crossbills, siskins and other seed-eating finches.

State wildlife biologists Peter Bente and John Wright, collaborating with researchers from the Center for Conservation Research and Technology of University of Maryland, tracked migrating Arctic peregrines from the North Slope in the fall of 1999. Four adult female peregrines from the Sagavanirktok River (which parallels the Dalton Highway to Prudhoe Bay) were equipped with tiny backpack satellite transmitters.

The transmitters allowed the researchers to track the migrating birds through November. All four followed the eastern slope of the Rocky Mountains south.

One followed the mountains into Central America and on to Colombia. Two reached the southern U.S., veered east, then flew across the Gulf of Mexico - one was tracked as far as Southern Mexico, the other went into Colombia. The fourth followed the Rockies across the Yukon only to Northern Alberta, where it probably died.

Peregrines are found on every continent in the world except Antarctica, rivaling ravens as one of the most widely distributed birds on Earth. Although they are widespread, they are not particularly abundant.

Peregrines are outstanding as the fastest bird on the planet - peregrines have been clocked diving faster than 200 miles an hour. They reach those exceptionally high speeds in a stoop or dive, not in wing-beating flight (35-60 miles per hour is typical migration speed). Peregrines aerial prowess enables them to kill even powerful fliers like ducks on the wing.

Peregrines made the news in recent decades as a prominent conservation symbol. The widespread use of the pesticide DDT after W.W. II caused a precipitous decline in peregrine numbers across the U.S. and Canada - with the exception of the non-migratory Peale's peregrine subspecies.

A concerted recovery effort was launched in the mid-1960s. DDT was banned in the U.S., and in the Lower 48 a captive breeding and reintroduction program helped re-establish falcons. A remarkable recovery followed and the Arctic peregrine was de-listed from federal endangered/threatened status in 1994, and the American peregrine in 1999.

Alaska's American and Arctic peregrine populations fell to very low numbers in the mid to late 1970s and recovered without artificial reintroduction programs. Alaska Fish and Game biologists participated in monitoring the recovery and status of American and Arctic peregrines. State biologists have surveyed remote areas of Alaska for peregrines and studied Peale's peregrines in the aftermath of Exxon Valdez oil spill.