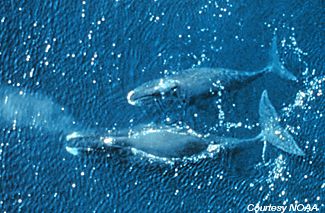 The population of bowhead whales in the Western Arctic, known as the Bering-Chukchi-Beaufort Sea stock, has doubled in number in recent decades. More than 10,000 now swim in Alaska waters

Bowhead whales, once hunted to the brink of extinction by commercial whalers, are on the rebound in Alaska. The population in Alaska waters - representing about 90 percent of the world's entire population of bowhead whales - is now estimated to be at about 10,000 animals and growing.

The Alaska population, known as the Bering-Chukchi-Beaufort Sea stock, is one of the world's five stocks of bowhead whales. The other stocks swim the frigid waters of Canada and Greenland, Hudson Bay and the Sea of Okhotsk north of Japan.

Bowhead whales are named for their great arching heads, which can break through sea ice to create breathing holes. Unlike humpbacks and most other baleen whales, which migrate seasonally between tropic and high-latitude waters, bowheads spend their entire lives near the ice in arctic and sub-arctic waters.

Bowheads are extremely vocal animals and use sound to communicate and navigate in ice-choked Arctic waters. Bowheads weigh up to 80 tons - and half that weight is an insulating layer of blubber that can be up to 20 inches thick.

That blubber made these animals a prime target for commercial whalers in the 19th century. Bowheads render more oil than any other whale, and like their close cousins, the right whale, bowheads float when killed. European whalers first targeted bowhead stocks in the North Atlantic waters off Greenland in the 1500s.

In the mid-1800s, in addition to the valuable oil, the growing, lucrative market for baleen or "whalebone" put even more pressure on bowheads. About this time whaling captain Thomas Roys discovered the Bering-Chukchi-Beaufort Sea stock, launching five decades of commercial whaling in the Western Arctic.

Detailed historical whaling accounts, and records of the quantity of bowhead whale oil marketed, offer insight to the number of whales harvested. The pre-whaling population of bowheads has been estimated at about 50,000 worldwide, with about 30,000 in the Bering-Chukchi-Beaufort sea stock.

Commercial whaling for bowheads, which essentially ended about 1910, reduced the world population to fewer than 3,000 animals. More than 90 percent of the Bering-Chukchi-Beaufort sea stock was harvested, and the other stocks were virtually annihilated.

These other stocks have been very slow to recover, and with the exception of the Hudson Bay stock, number just a few hundred animals. Biologist Craig George of the North Slope Borough said recent data indicates the Hudson Bay stock is showing signs of growth and may now number close to 1,000 whales.

Bowheads in Alaska waters are faring the best of all. In recent decades the Bering-Chukchi-Beaufort sea stock has been growing at a rate of three-and-a-half percent a year. Marine mammal biologists, working closely with Alaska Natives in the Arctic, conduct an annual census of the whales during their spring migration past Point Barrow. Scientists employ a series of hydrophones to monitor whales underwater. This acoustical data, combined and air and shore-based observations, indicates the number of bowheads in Alaska waters has tripled over the past 30 years.

That's good news for Alaska Natives who harvest bowheads on a subsistence basis. Biologists assign a harvest quota intended to maintain population growth while allowing some subsistence whaling each year. Eskimo whalers have taken 40 to 50 whales annually in recent years, with a current quota of 67 strikes per year.

"We have lot's of good data," said Robert Suydam, a biologist with the Alaska Department of Fish and Game in Barrow. "This is a success story of a well-managed hunt."