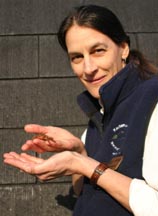 Catie Bursch belongs to a guild of artists who bring extinct animals to life, make the unseen visible, and put the enormity of the universe on paper. Bursch is a scientific illustrator and a marine educator with the Alaska Department of Fish and Game, working at the Kachemak Bay Research Reserve in Homer. She’s drawn her share of fish, plankton, plants and animals, but she said scientific illustration goes way beyond drawing critters for guide books. “There are no photos of dinosaurs, but by studying and synthesizing all the information available, illustrators can reflect the findings of science,” she said. “It goes from drawing a virus, which no one can see, to drawing the solar system. You have to create a vision, using scientific facts.” While art reflects culture, scientific illustration reflects the findings of science, she said. “Scientific papers are one form of communication; this is another form of communication, visual communication.” “You’re an artist in the service of science, and you have a directive,” she added. “You’re trying to get something across scientifically. If someone is trying to key a fish out, you’re going to draw it differently than if you are showing how beautifully it moves through the water.” Sometimes that means drawing a completely realistic rendition of a specimen, and sometimes it means taking liberties. “Right now I’m working on illustrations of salmon, some of these might end up in the reg books, helping anglers to quickly ID between steelhead, coho, and king salmon,” she said. There’s no color, and the emphasis is on other details - the outline, where the spots are, the color of the inside of the mouth. “You take artistic license to communicate more effectively.” Other times it means following accepted scientific illustrator’s protocol. A fish always faces left and every single fish scale is drawn. The artist shows the rays of the fins, and counts the rays so it’s the correct number. Photographs are hard to work from, Bursch said, as it’s easy to distort or skew the proportions. “By far it’s best to work from a real specimen. Generally it’s preserved, and often I’ll have it pinned out – I carve the Styrofoam (base) so it lies correctly, then I pin it so the fins spread out. I need the measurements and proportions accurate. It can be time consuming.” That also involves periodic breaks to re-wet the specimen with alcohol or other preservatives. Bursch began working for the Kachemak Bay Research Reserve in the spring of 2004. While drawing is often a solitary pastime, the bulk of her work at KBRR is in education, helping the public and school groups expand their knowledge of Kachemak Bay and its workings. She teaches classes and organizes Discovery Labs at the Alaska Islands and Ocean Visitor Center, where KBRR is housed, and goes into schools and biology classes, and takes students outside as well. “I use illustration a lot with outreach, and incorporate drawing with many of our classes,” she said. “You can look at something forever, but if you have to draw it, you really get to know it. Asking kids to draw really slows them down, gets them to focus on observational skills.” Bursch has also worked with Outward Bound Schools and the National Park Service. A few years ago she produced a series of botanical illustrations for Wrangell-St. Elias Park, a series on “What’s blooming this week.” In recent years she’s created a set of colored pencil drawings of marine invertebrates for display on the Alaska Marine Highway ferries. The illustrations have been reproduced and laminated as table-top displays. She also contributed a number of illustrations to a plankton guide that the Kachemak Bay Research Reserve uses in their lab classroom. Bursch has also commercial fished for almost 25 years. “I went to college for one year in environmental education, and then I moved to Alaska in 1981 and started commercial fishing. I did a lot of different things, and then about five years ago, when my kids didn’t need me at home so much, I decided to finish my degree, and I studied both art and science.” She took classes at Kenai Peninsula College in Homer, and then finished off in Anchorage at Alaska Pacific University. She earned a self-designed degree, liberal studies with emphasis in scientific illustrations. She’s still commercial fishing, and her family set nets for salmon in Bristol Bay. An important part of her education came from outside academia, in the company of other artists. “I always drew my whole life, and I was mostly self-taught,” she said. “About eight years ago I heard about this organization, the Guild of Natural Science Illustrators. They have a national annual conference. I’ve been attending those conferences and learning from the people in that group. They’ve also published a big book that’s like my bible for scientific illustration, ‘The Guild Handbook of Scientific Illustration.’” She’s been drawing a lot of fish lately, focusing on under-rated forage fish, as part of a larger project. “There’s been a lot done on sport fish, but we need to understand the fish these guys eat, one level deeper, the fish the sport fish eat, and that seabirds depend on.” Bursch said she loves spending time outdoors poking around and then drawing what she finds. She and her husband and two daughters often spend their free time fishing, hiking, or skiing in Homer, Bristol Bay and the Wrangell Mountains. Learn more about the Kachemak Bay Research Reserve, You can see more of Catie Bursch’s illustrations by clicking on the tab labeled illustrations. 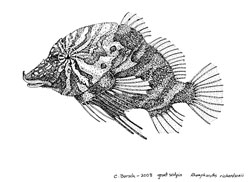 An illustration of a grunt sculpin by Catie Bursch 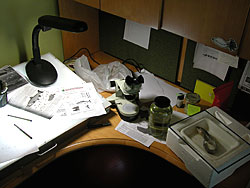