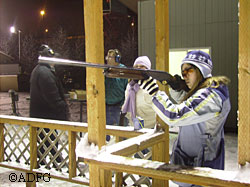 A shotgunner in the youth league at the Rabbit Creek Range in Anchorage.

After shooting more than 35,000 rounds, about 70 young shotgunners in the Rabbit Creek Youth League wrapped up the fall session in Anchorage.

About 100 kids are coached by trained, volunteer instructors and compete in five-stand or sporting clays in youth shotgun leagues in Anchorage and in the Mat-Su Valley, said Jerry Soukup, director of the Alaska Department of Fish and Game’s Hunter Information and Training Program.

The Hunter Information & Training Program, working with the Outdoor Heritage Foundation of Alaska, is involved with two programs, one at the department’s Rabbit Creek Shooting Park in Anchorage and a second at the private Grouse Ridge Shooting Range in Wasilla. The HIT Program assisted Neil Moss, our most active volunteer instructor in the Mat-Su Valley, in forming the new league at Grouse Ridge. About 30 kids participate in the league in Wasilla. The Anchorage league runs two, ten week sessions each year, in the fall and in the spring. Shotgunners compete year-round in Wasilla.

The league has been active for ten years, and Soukup said some kids have gone on to earn college scholarships due to their skills acquired in the league.

“We have nationally ranked champions and state champions that were in our league,” Soukup said. “We have four kids that are now attending college on scholarships for shotgun shooting. A few other young ladies are looking at scholarships – seniors in high school – and they have the capability of going on to college on scholarship.” Successful young shooters in Alaska are nothing new. UAF has had nationally ranked collegiate rifle teams for years with a few notable names going to the Olympics. 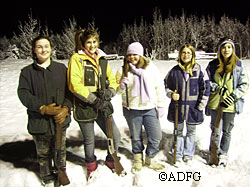 A team of young shotgunners.

Competitive shooters from Alaska are known nationally, Soukup said. He attended a National Sporting Clays Association tournament in San Antonio in late October with 1,400 shotgunners. “You mention Alaska and most people know who the top shooters are, and they’re our kids, Master Class shooters,” he said.

As of this past summer, at least one is known world-wide. At the Olympics in August, Alaska’s Corey Cogdell earned a bronze medal in women's trap shooting. Corey completed our Basic Hunter Education course in 2008 and trained and shot at Birchwood Recreational Shooting Park in Chugiak. She took the time to meet with young shotgunners at Grouse Ridge early in November. The event was our first-ever Scholastic Clays Target Program state-wide tournament.

Lee Rogers, with the department’s Hunter Education and Training program, serves as one of the coaches at Rabbit Creek. “We have a fall and spring session with awards, trophies and lots of fun,” Rogers said. “It’s a very family oriented sport.”

Youth range in age from 10 to 16, and they compete in three age classes. Kids shoot 25 rounds for practice at five stations, they are coached, and then they shoot 25 for scoring.

Rogers compared sporting clays go to “golfing with a shotgun.” Participants shoot from a variety of stations, shooting 50 or 100 times in situations that evoke the way game birds flush in actual hunting situations. 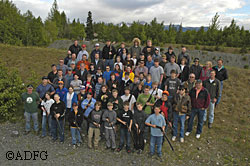 Participants in the Youth Shotgun League.

Rogers said the youth program is run by volunteers and the state donates the facility for use. A variety of sponsors contribute, providing shotguns, trophies, helping pay for the annual awards banquet, donating or paying for the target throwers,

“They really help keep the cost down,” Rogers said. “It would cost the kids a lot more without this help.”

Parents pay $300 per shooter per ten week session, and that covers the cost of the ammunition. The Outdoor Heritage Foundation provides shotguns so kids don’t have to commit to having a gun to use.

Soukup said the program also takes kids hunting. All the participants in the youth shooting league are required to pass hunter education.

“We do have small game youth hunts, sponsored by partner groups,” he said. “People bring dogs, and these kids get to go home with a bird.”