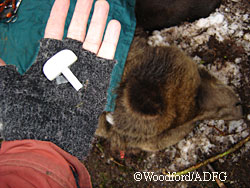 An RFID tag before it's attached to a brown bear. Photo by Riley Woodford.

The sow, and her half-grown cub, actually got both ears pierced. A small, flat, red plastic tag marked 446 went into one ear. The other ear sported an RFID tag, a new device that could simplify and improve the way biologists identify wild animals.

After taking measurements, samples and equipping the mother bear with a GPS collar, Beier signaled it was time to leave. The immobilizing drugs were beginning to wear off, and these wild brown bears were ready to return to their wild ways. Beier and his colleagues with the Alaska Department of Fish and Game are studying brown bears in the Berners Bay area north of Juneau, and the information gathered is helping biologists understand how this population of bears differs from other Southeast Alaska brown bears, and how they use their habitat throughout the year.

The RFID tag is the latest tool in the rapidly developing field of wildlife biology. In recent years tools like hair snares and DNA testing, GPS collars and GIS technology have revolutionized bear research in Alaska. RFID stands for Radio Frequency IDentification, and it allows biologists to identify an animal, such as bear 446, without actually seeing it. That has tremendous potential, but there are some problems to overcome first.

RFID tags for bears are plastic buttons about the size and shape of a small grocery-store mushroom, or a golf tee and half a golf ball. The stem piece goes through the bear’s ear, and the cap contains the actual RFID tag. A back keeps the tag from falling out, much like the back on a post earring. The actual electronic device with battery, inside that tough plastic shell, is about the size of a stack of five dimes. The device has a lifespan of four or five years.

“It’s a little transmitter that sends out a coded signal,” said wildlife biologist Rod Flynn.
“It’s an active tag, and the coded signal is the ID of the tag.”

According to the website for the manufacturer, Integral RFID, the ID code is transmitted every 10 seconds if the tag is stationary, or every two seconds if the tag is moving. The tag signal is picked up by a small RFID reader that decodes the information and returns it to a host PC or PDA.

That means a researcher with a reader can simply fly over an animal. Or a stationary reader can be set up and will automatically record the presence of the animal if it comes within range. “If you are within range the number of tag just shows up on the screen,” said Flynn. “It’s a presence/absence thing. When it’s present it tells you who it is.”

Researcher LaVern Beier attaches an RFID tag to a mother bear as her cub waits.

The range depends on vegetation and other factors, but Integral RFID claims about 1,800 feet. Beier said he’s been able to detect the tags when in aircraft about two miles from the subject.

The difference between the stationary and moving tag signal is important. A stationary signal is typically referred to by biologists as a mortality signal, and lets researchers know if the animal is dead and not moving, or if the tag has come off.

Beier said the tags as a research tool were first developed for polar bears, although the technology has other commercial applications. Being able to identify individual animals is crucial to virtually all wildlife research. In order to learn how far animals travel, how they use their habitat, or even how long they live, biologists need to know who is who. Polar bears tend to lose collars and ear tags, and researchers needed a way to easily identify animals.

Fish and Game bear researchers were looking for an inexpensive tag that would stay with a bear for several years after the GPS collar self-released. They began using the tags in Southeast Alaska about a year ago. They hit one major drawback – the tags come off.

Beier is also involved in a polar bear study, and said across the board, researchers are coming up against the same problem: retention. The tags come off, or bears pull them out. Beier estimated that about 80 percent of the RFID tags he’s attached to bears in the past year have come off. He suspects bears pull off the tags, or other bears pull them off, but in many cases there is no evidence of tussling.

“We’ve caught a few bears again, bears that have lost their tags,” he said. “It’s not like another bear grabbed it and ripped it out. The hole is there, or it’s healed, but it looks like it just fell out.”

“These would probably work great for elk, moose, goats and deer,” he added. “It’s just bears and the way they behave. They’re pretty hard on equipment.”

Beier has climbed up trees and watched bears come around after the immobilization drugs are reversed or wear off. He said bears are quick to detect even the standard ear tags. “They always notice the tags before the collar, even the cubs,” he said. “It’s the first thing they go to.”

Two bears with RFID tags. Time will tell if they retain the tags.

Beier has modified the tags himself in an attempt to improve the way they attach.

“It’s a good tool, it just needs some R and D,” said Beier. “It needs better configuration, more streamlined or pill-shaped. Or a design that’s implanted.”

Beier said the polar bear researchers are working on developing a model that can be easily and safely implanted under the bears’ skin. That may be the best for brown bears as well.

Flynn said until the retention issue is addressed, RFID tags, deployed as an eartag, have limited utility on bears. But the potential is there, and it goes beyond simply identifying an individual animal. He pointed to another commercial use of the RFID technology.

“My daughter has one in her car,” he said. “She’s in the Bay Area, and when she crosses the Golden Gate Bridge she doesn’t stop for the toll. There’s a reader, and she just gets a monthly bill.”

RFID tags are used in the trucking industry as well. Readers at different warehouses log the time that different trucks come in. That also has implications for wildlife research.

“If you think an animal or animals are coming to a certain place, you could set out a bunch of receivers and essentially count them as they came by,” he said. “Or studying corridor use, are animals actually traveling back and forth, you set up a receiving station and log every animal that comes by.”

Beier pointed out another potential application. Tagged polar bears around oil field operations, or communities, will trigger a detection device when they approach. The readers can then trigger an alarm, alerting workers that bears are in the vicinity.

Integral RFID also has customers using RFID technology as remote sentry devices to deter theft of beehives. Tags are continually monitored and an alert is sent out if tags (aka beehives) are moved outside normal business hours.

Riley Woodford is a writer with the Division of Wildlife Conservation. He recently participated in a week-long bear tagging project with LaVern Beier.