Harbor Seals in Trouble
Some Areas Have Seen Dramatic Declines 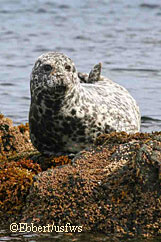 Harbor seal numbers have declined significantly in Alaska, particularly in the Aleutians.

Many of Alaska’s marine mammals have been in trouble in recent years. Recent declines of Steller sea lions, northern sea otters and northern fur seals are well documented in the Bering Sea and Aleutian Islands.

But how are harbor seals faring?

Biologists and others in the region suspected harbor seals had also declined in the Aleutians, but until recently, no one had the data to prove it.

Bob Small, Fish and Game’s statewide marine mammal program coordinator, said he initially thought no baseline data existed on harbor seal populations in the Aleutians comparable to that for the other species of marine mammals that have declined in the region.

Researchers have recently focused more attention on Arctic marine mammals affected by climate change. The status of harbor seals tended to be overlooked.

“So little has been done on harbor seals in the Aleutians, there are lots of unknowns,” Small said.

Even so, some scientists wondered about the light and dark-colored seals. At a meeting of marine mammal scientists a few years ago, a colleague indicated to Small that old harbor seal population data might exist. Small took it on as a challenge and soon found a series of old U.S. Fish and Wildlife Service wildlife reports that documented extensive surveys conducted by skiff in the Aleutians from 1977-1982 that included counts of harbor seals.

Small wondered if he might be able to compare the old survey data to an aerial survey of harbor seals done in 1999 by the National Marine Fisheries Service.

Even though the survey techniques were different, Small concluded he could.

And what he found was dramatic – at least a 67 percent decline in the harbor seal population between the two surveys over the entire region. The worst drop occurred in the western Aleutians – an 86 percent decline.

Harbor seals are found in oceans throughout the northern hemisphere.

Recently, Small and three colleagues published a paper in the scientific journal, Marine Mammal Science, documenting the Aleutian harbor seal decline. The other authors were Peter Boveng with the National Oceanic and Atmospheric Administration (NOAA) in Seattle, Wash., Vernon Byrd of the Alaska Maritime National Wildlife Refuge in Homer, and David Withrow, also with NOAA in Seattle.

In the paper, Small and his colleagues document how they were able to compare the two surveys. The skiff survey of the Aleutians Islands Unit of the Alaska Maritime National Wildlife Refuge was vast in scope, covering many species across the shorelines of over 100 islands. The skiff survey of 1977-82 recorded 8,601 harbor seals on 106 islands, whereas the 1999 aerial survey by the National Marine Fisheries Service noted just 2,859 seals on those same 106 islands.

The skiff surveys were done when visibility was good but not at any specific time of day or year. The aerial survey, on the other hand, was done during the molting season and around low tide, when the highest number of seals would be visible along the shoreline for a maximum count.
The skiff survey did, however, count seals in the water, which was not done during the aerial survey. That might account for a few extra seals, Small said, but in general the methods of the 1999 should have documented the largest number of seals. For those reasons, Small and his colleagues believe the documented decline between the two surveys is likely conservative, with the true decline being higher yet.

Now that the decline is known, Small said it is unlikely that harbor seals will become listed as endangered or threatened under the federal Endangered Species Act. However, he said, the discovery could lead to a discussion about designating part or all of Gulf of Alaska stock of harbor seals as “depleted” under the Marine Mammal Protection Act.

“Harbor seals still aren’t going to grab a lot of attention, but this might raise their level of concern,” Small said.

Currently, the Gulf of Alaska stock of harbor seals covers a vast region – from the Northeast Gulf of Alaska and Prince William Sound to Kodiak and all the way through the Aleutian Islands. Scientists have obtained information indicating that the large stock should be split into smaller stocks, which would then allow them to focus on the areas most in trouble.
So a decline exists. But what is causing it? And when did it begin?

The next steps are to examine additional count data collected since 1999 and then explore what factors could be influencing how well the seals are surviving and reproducing. It may be the seals aren’t getting enough to eat, are suffering from disease or contaminants or that their population is depressed by predators. Likely, Small said, more than one problem is to blame.

Small said Fish and Game has no immediate plans to do additional research on harbor seals in the Aleutians. Before doing more research, he said, scientists will likely reassess the population structure of Gulf of Alaska harbor seal stock and decide if it needs to be split into smaller stocks.

Interestingly, Small noted, harbor seal populations, as well as sea lion and sea otter populations, appear to have remained relatively stable in the Commander Islands in Russian waters west of the Aleutians. It remains a mystery why marine mammal species in that region are doing well but the same species are suffering steep declines nearby.