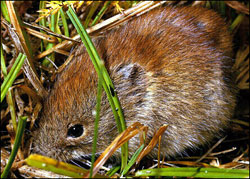 A red-backed vole, one of the most common species of voles in Alaska. Voles are small rodents, more similar to lemmings than to mice. Red-backed voles typically live in the forest in small groups.

Voles are among the smallest mammals – adults weigh less than four ounces – yet they play a huge role in the food chain. They are the primary food source for many small mammals and birds in Alaska, including weasels, martens, foxes, coyotes, owls, hawks and jaegers.
Even bears and wolves will eat voles, with black bears sometimes turning over logs and breaking into brush to find them.

“Anything predatory will take them opportunistically,” said Ian Van Tets, an assistant professor of biology at the University of Alaska Anchorage who is studying red-backed voles in Anchorage. “Voles are that fundamental step between plant energy and nutrition and carnivore energy and nutrition.”

In other words, voles are a fundamental prey species at the base of the food chain.

Lemmings play a similar role wherever they are found. Voles and lemmings look similar but while voles have a tiny tail, lemmings have a stump for a tail, Van Tets said.

Millions upon millions of voles live throughout Alaska but are rarely seen. They are active and awake all winter but live mostly under the snow, moving between their nests and foraging areas via extensive tunnel networks.

Voles memorize the tunnel routes and become so accustomed to their routes that should a rock suddenly be placed in the middle of one, the vole would most likely run right into it with its head, Van Tets said. The tunnels will typically stretch for hundreds of meters under the snow.

They keep under the snow to keep warm in winter, and to hide from predators.

“They stand out like a little brown snack on legs against a white background,” Van Tets said. “So they hunker down.”

Even so, predators hunt the tunnels and break into the nests in winter to eat voles.

Mice do exist in Alaska but are rare outside of cities and towns. If you think you’ve seen a mouse outside of human settlements, odds are it’s probably either a vole or a shrew, Van Tets said.

Red-backed voles, the species that Van Tets is studying, nest in groups at the base of trees or in dead fallen trees, above the ground but under the snow. They live in groups of half a dozen to a dozen, with mostly females and a few males. Living collectively helps them conserve body heat in the winter.

The younger males, which tend to be cast out on their own, are often the first ones to freeze to death in winter.

“It’s sad, being a vole sometimes,” Van Tets said. “Yes, a lot of them die in the winter.”
Voles also don’t live very long; they rarely live to be older than a year.

A vole’s diet changes with the seasons. In spring and summer, they eat a lot of grasses and young leaf shoots. Later in fall and winter, they shift over to roots, fungi and seeds but will also eat carrion when they find it or even other voles.

A shrew. Shrews, mice and voles are sometimes confused, but shrews are not even rodents, they are insectivores.

“If they find a dead vole in winter, they don’t waste it,” Van Tets said.

In the winter, they will happily nibble on fallen antlers.

Like lemmings, voles go through periodic booms, though not as dramatic as the vast population fluctuations that lemmings go through. In boom times, their population might be 50 to 100 times higher than usual. Those boom times, which usually occur every four or five years, also result in increased breeding for weasels and other animals that rely heavily on voles for food.

Even secondary prey species benefit from vole and lemming booms because generally, they and their young are safer from predators during those boom times. Eiders, for example, increase their breeding activity when lemming numbers are at a peak.

Van Tets’ current research on voles is focused on how the animals maintain the energy to survive and breed, particularly during Alaska’s harsh winters. With captive northern red-backed voles at the Alaska Zoo, Van Tets and his students are monitoring the vole’s energy use and correlating it with snow depth and temperature. The research is funded by a National Science Foundation grant.
Breeding typically starts during late winter and continues through August. Gestation is about 21 days and litters are typically number from six to eight. Females can have up to six different litters in a year.

Accordingly, the population can expand rapidly.
As part of his research, Van Tets is studying why some red-backed voles can continue to reproduce throughout the winter. While most male voles’ testes reduce dramatically in size in winter and become sexually inactive, one in five voles is able to maintain large testes size, if the conditions are just right. If it is not too cold, snow cover is sufficient and food is available, those males can continue to breed, which can boost the overall population.
Van Tets said it is possible that climate change could result in higher vole populations if the conditions are such to induce more winter breeding.

“If climate change doesn’t affect them, that’s good news,” he said. “But if it does affect them, it will also affect snowy owls, jaegers, and any animals that preys on voles and lemmings. Any change in their populations will affect everyone else.”

Eizabeth Manning has worked as a journalist and outdoor writer. She is an educator with the Division of Wildlife Conservation, based in Anchorage.