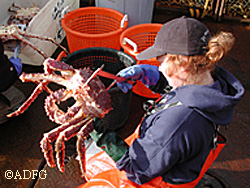 A trainee in the Crab Fishery Observer program measures a crab.

‘Observers in the Bering Sea and Aleutian Islands Crab Fisheries’ is a 24-minute information video filmed on location featuring three crab observers in their everyday duties and life at sea onboard crab fishing vessels in the commercial fisheries, collecting data for the department. The production was coordinated and funded by the State Shellfish Onboard Observer Program, and filmed and edited by the University of Alaska Anchorage, North Pacific Fisheries Observer Training Center (OTC).

The release of this video production in July 2008 marks the program’s 20th anniversary. The State Shellfish Onboard Observer Program began in 1988 after the Board of Fisheries found that onboard observers provide the only effective means of collecting essential biological and management data in the crab fisheries without unduly disrupting fishing operations. Data collected by onboard observers has become an integral component in the Bering Sea and Aleutian Islands (BSAI) crab fisheries managers’ decision making process. These data are used to help characterize the fisheries, monitor bycatch, and define annual overfishing and total allowable catch limits.

The video was originally developed as an aid for training crab observers; providing necessary visual examples of observer duties and working environments. Joe Chaszar (OTC observer trainer and videographer) edited and condensed the two plus hours of training video for public distribution and for use as an observer recruitment tool. Joe’s editing and choice of special effects are appropriate to the subject matter and the video’s audience, helping to move the action along without compromising but rather emphasizing important points.

We are grateful for the hospitality and assistance given us by the captains and crew of the C/P Pro Surveyor and the F/V Time Bandit. Special thanks go to crab observers Steve Brown, Sara Slaughter, and Mike Todd for agreeing to be filmed.

To obtain a copy of the DVD contact one of the department’s Dutch Harbor observer program office staff; Mary Schwenzfeier, Melissa Salmon, Jeanette Alas, Jennifer McGrath, or Kevin Renfro at 581-1239.

For those interested in finding out more about the observer program and observer training see this following list of publications, websites, and commercial fisheries regulations. 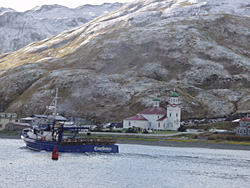 A crab boat heads out to the Bering Sea.

5 AAC 39.142. Conflict of interest standards for onboard observers and independent contracting agents.

5 AAC 39.146. Onboard observer briefing and debriefing.