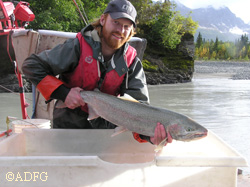 Part of it deals with their complex life history. Steelhead were formerly known as Salmo gairdneri, whose famous “cousin” is the Atlantic salmon or Salmo salar. It wasn’t until 1988 that the American Fisheries Society supported Robert L. Kendall’s findings and changed the steelhead’s nomenclature to what it is today, Oncorhynchus mykiss. If this Latin name looks familiar it’s because the rainbow trout carries the same name as steelhead.

Steelhead belong to the family Salmonidae which includes all salmon, trout, and chars. Steelhead, like most salmon species, are anadromous. Anadromous fish are those that migrate from salt water to spawn in freshwater. In particular, steelhead are an anadromous form of rainbow trout, and the Copper River drainage represents the northern-most distribution of steelhead in North America. Anadromous steelhead and resident rainbow trout share a close genetic relationship. Anadromous forms can convert to resident forms and vice versa. Moreover, both forms are typically found in the same tributaries and resident and anadromous parents can produce offspring of both varieties.

In contrast to Pacific salmon, steelhead are iteroparous, which means they can spawn more than once in their life. Adult Copper River steelhead typically spend two years in saltwater before migrating back to their freshwater spawning grounds. Radiotelemetry studies suggest that steelhead enter the Copper River Delta from early August through late September. A proportion of these fish migrate directly to their clear water spawning tributaries and over-winter in the deeper parts of the mainstem river or nearby lakes, like the Dickey (Gulkana River drainage) and Hanagita (Chitina River drainage) lake stocks. The remaining steelhead are over-wintering in the turbid mainstems of the Copper, Tazlina, and Chitina rivers near the mouths of clear water tributaries or Tazlina Lake. Over-wintering continues through about mid-April when the steelhead begin to migrate to their actual spawning grounds. Spawning takes place from mid-May to mid-June and migration back to sea follows immediately after. Juvenile Copper River steelhead typically spend their first three years of life in freshwater before migrating to the sea. 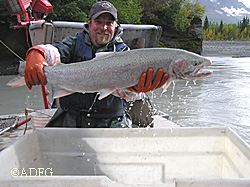 Part of the elusiveness of steelhead is because previous abundance estimates on the Dickey and Hanagita lake stocks, which were considered to be the most significant spawning stocks, suggest that the total returns are relatively small, somewhere between 500 to 1,000 steelhead. Unfortunately, to obtain accurate estimates of spawning distribution and a relative abundance, a fair number of steelhead need to radio-tagged in the mainstem Copper River. Needless to say the study objective of capturing and radio-tagging over 200 steelhead (130 in 2005 and 2006) from a return of 1,000 steelhead (relatively small), or 5,000 (relatively large) for that matter, in an extremely fast flowing, turbid river in a drainage the size of West Virginia is a little complicated.

So, what do I mean by relative abundance? Well, abundance estimates for the Hanagita and Dickey lake stocks were about 500 steelhead combined in each year of a two-year study. The total return will be relatively small if 80 percent or more of the radio-tagged steelhead return to these two spawning areas. If 20 percent or less returned to these areas and the remainder are found in a number of other clear water tributaries then it’s likely the total return is relatively large.

In the end, we used fish wheels to capture and radio-tag 53 steelhead in the fall of 2005 and 42 in 2006. In the spring of 2006 only 8 percent of the tagged steelhead spawned in the Dickey Lake spawning area while 0 percent were located in the Hanagita Lake spawning area. In the second year, distribution estimates were 11 percent and 12 percent for Dickey and Hanagita lakes, respectively. In contrast, Kaina Creek, which is a small stream in the Tazlina drainage, had 23 percent and 23 percent in the spring of 2006 and 2007, respectively. Even though the goal of radio-tagging over 200 steelhead wasn’t accomplished this evidence suggests it’s possible the total return is relatively large.

All in all it was a great project; working on the Copper River with such a beautiful fish during the fall when the colors are out was remarkable. Migration times, over-wintering areas, and spawning distribution estimates were determined, plus steelhead were documented in five more streams than previously known. However, as with most studies, learning something about a population always leads to wanting to know more. Here’s to continued steelhead research!

James Savereide is a research biologist for the Division of Sport Fish and is based in the Fairbanks office.